St Andrew's Hospice, Grimsby, NE Lincolnshire, UK Content from the guide to life, the universe and everything 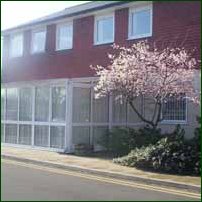 As of 2006, the only Hospice in North East Lincolnshire is St Andrew's Hospice in Grimsby. The adult unit has eight beds for the terminally-ill and offers day care respite for patients with life-threatening illnesses.

Funding for the Hospice is made up of 3% from the Government and the other 97% by volunteer fund-raising. The building itself, which was completed and opened in 1981, was built with money raised through charitable donations.

Palliative care is treatment that improves the quality of life of patients suffering from life-limiting illnesses. Assessment and early identification of needs, treatment of pain and provision of comfort are all part of the plan. Families and significant others are included in the plan, consultants are available at any time and there are no set visiting hours. The dignity of the patient is valued at all times. Patients' rights are recognised and respected by all staff regardless of age, disability, illness, race, religion, gender, sexual orientation or financial situation.

One of the aims of terminal care is to enable the patient to die in a place of their choosing, having had symptoms controlled with coping strategies upheld, and support from qualified nursing staff. Those without close family members or visitors receive moral support given by Hospice volunteers as well.

No charge is made for any care given and the Hospice relies on donations, which are gratefully received. As St Andrew's is charity-run, they rely on public support to achieve the £2.3million per year necessary to continue their service. Running the In-patient Unit costs £301 per day for each bed and £117 per day for Day Therapy places. Day patients are asked to make a contribution of £1.20 (2006 price) towards the cost of their lunch/tea.

There is a small area in the Hospice reception1 offering home-made/home-grown goods for sale which can be paid for when signing in. The Hospice runs their own lottery (which provides the Hospice with 13% of its total needed income), and sell their own pin badges, notelets and Christmas cards.

The Hospice has four charity shops in Grimsby and Cleethorpes which are run by volunteers; they accept unwanted gifts and clean second-hand clothing, etc, which are sold on to raise funds. There are Hospice Tea Bars at Grimsby Magistrates Court, Victoria Street, Grimsby, and the Pilgrim Health Centre, Pelham Road, Immingham, NE Lincolnshire.

My father was diagnosed with aggressive stomach cancer in December 2005. He was admitted to St Andrew's Hospice on 6 November, 2006, having had one respite session there with my mother. From the moment he was admitted, nothing was too much trouble for the excellent nursing team. We were continually informed about his condition and we had no uncertainties about his care. We could ask any questions and bring in anything Dad asked for, or we thought he might need, home comforts, etc. While we were visiting the staff kept a discreet distance, but were always 'on call'. There was a small kitchen area where we could make tea and coffee for ourselves, and a nicely-furnished conservatory where we could go sit and chill out.

Remembrance Sunday was a special occasion - the staff got Dad up, dressed him in his NVA blazer, cap and medals, and sat him in a chair ready to watch the Cenotaph tribute, share the two minute silence and take the salute with The Queen. They even took photographs for us. A couple of days later one of the staff called us into a private room and asked if we wanted Dad to pass away at home, it could be arranged, or were we happy to leave him in their care. Both my mother and I agreed that he was in the best place. A few days later we got the phone call that he was deteriorating and arrived at the Hospice just five minutes after he'd died, but three staff members were with him so he wasn't alone when he passed away.

They made an unbearable time almost bearable. One of the regular nursing team attended the funeral. I'm working through my grief by volunteering for the Hospice, and intend to continue. The care they provide is second-to-none and I cannot recommend them highly enough.
- An h2g2 Researcher.

The St Andrew's Hospice for Children and Young People building is attached to the adult section via a walkway. Its aim is to provide a home-away-from-home for patients and their families. There are four In-patient rooms and large family accommodation with two bedrooms, lounge, and kitchen/diner. There are no set routines and visiting is unrestricted, subject to parental permission. For patients the facilities include: a large garden and outdoor play area; an indoor play area with ball pool; a Jacuzzi room with multi-sensory equipment; a multi-sensory room and a computer room.

The Hospice staff provide family support and run a Parent Group with the aim of mutual support. For siblings there are the 'Caterpillar' and 'Tiger' clubs which provide a safe environment where they can express their feelings through play, or just need someone to talk to. Bereavement support continues to be offered for up to two years.

The Children's Hospice mascots are Harry and Holly Hosmice. On 23 December, 2006, an ITV programme arranged for 'snow' and Father Christmas, along with a life-size Harry and Holly Hosmice, to visit the patients and their families at the Children's Hospice. The children were given presents and St Andrew's, which had been chosen out of 38 other UK hospices, was presented with a new Ford Zetec people carrier.

I loved seeing Santa; I have had a lot of fun with all my friends.
- Patient Blake Munton, 11, who has a brain tumour.