A Fun Activity to do with Christmas Cards Content from the guide to life, the universe and everything 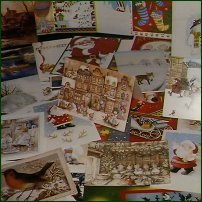 Every year in the UK, we send out 1 billion1 Christmas cards, which works out at 17 for each man, woman and child. This means that once Twelfth Night has been and gone, 1 billion Christmas cards are likely to be binned, sent for recycling2 or sent to charity. This number of Christmas cards is enough to stretch around the world five times. However, many cards, especially those not bought mass-produced in boxes, seem too attractive to be disposed of so lightly.

Being a Christian event, one would expect Christmas cards to depict the traditional Nativity scene showing the baby Jesus in a manger, and Mary and Joseph, as described in the gospels of Matthew and Luke, with possibly additional characters from the Bible such as the shepherds and their sheep. However, apparently Nativity scenes appear in only one percent of all Christmas cards.

We are indebted to The Biologist (official journal of the Society of Biology, London, UK) for the original idea, published in 1983, of cataloguing the different plant and animal species which are depicted, and speculating on the closeness of their relevance to Christmas. Of course, those with other interests, for example transport, could devise their own activities.

The objective is to take a census of each individual animal and its species depicted on the card, including cartoon subjects, toys, heraldic symbols and even portions prepared for the table.

Some creatures appearing on Christmas cards are legendary or mythical, and you can have fun trying to classify these using the Linnaean Classification System.

Many legendary, heraldic and cartoon creatures can be put in class Reptilia (modern or extinct). Phoenixes can be put in class Aves (birds) as jungle fowl or pheasant, Mickey can be classified as a house mouse, Rupert as a brown bear, while Teddy was originally a black bear. Unicorns (Equus monocerus) can be grouped with horses, but the greatest controversies occur over the Colley Bird, sometimes known as the Coaley Bird, which could refer, respectively, to a 'calling' bird (possibly the Starling?) or a bird black as 'coal', the Blackbird.

Once you have your list, categorise it by the criteria 'Most Frequent Species' and 'Most Unsuitable Species'.

Under 'Most Frequent Species', the robin is usually very well represented. The robin became the most popular emblem of yuletide because of its cheery red breast and its friendly and cheeky nature. This was enhanced by the fact that Victorian postmen also wore red and were nicknamed 'robins', thus reinforcing the bird's image as a harbinger of good tidings and gifts at Christmas time.

You may find multiple images of robins on a single Christmas card, a phenomenon which could be described as 'flocking'. The Biologist classifies this species as Erithacus rubecula congregans. Robins are fiercely territorial and by no means sociable with one another; so E r congregans is not found in the field.

Some species that normally flock, such as sheep, may be found on the Christmas card only as lonely token specimens; whilst attempts to illustrate the 12 Days of Christmas carol can result in large numbers of geese, swans and milch cows.

The category of 'Most Unsuitable Species' tends to be in the eye of the beholder. However, there can be no doubt in most people's eyes that kangaroos3, for example, have little relevance to Christmas.

Involvement with charities, either specialist animal charities or otherwise, can also distort the numbers of certain animals in your census. For example, the World Wildlife Fund has a panda logo, the Whale and Dolphin Conservation Society has, well, whales and dolphins, whilst a non-animal charity, the Samaritans, currently has Emperor Penguins on one of its Christmas cards.

There will be further distortion if a member of the family has an animal or hunting-related hobby such as ponies, cats or fishing.

What is the point of doing this?

The real point of this is purely diversionary. However, it could be done with children as a funky introduction to constructing Microsoft Excel spreadsheets with bar charts, pie charts and so on.

In the words of The Biologist, 'Merry Census'.

11 billion = 1000 million.2One such recycling scheme is operated by the Woodland Trust.3Members of the Rolf Harris Appreciation Society who are familiar with his Six White Boomers song might disagree with this!