History of the Normandy Veterans Association Content from the guide to life, the universe and everything 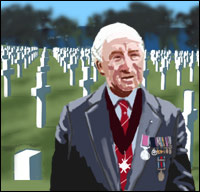 The Normandy Veterans Association is a support group for veterans of the Normandy Landings, which took place on the beaches of France in June, 1944. It was an important turning-point in the Second World War. This entry tells how the Association was set up by Eric Bulman and the problems it had in achieving recognition.

Situated on the Humber Estuary in Lincolnshire is the small holiday resort of Cleethorpes. It was here in 1981 that a meeting took place between four ex-service men of the Second World War. The meeting had been arranged by a man called Eric Bulman.

As a 19-year-old, he had served in the REME1 attached to the 8th Kings Royal Hussars who were in the 22nd Armoured Brigade of the 7th Armoured Division (Desert Rats) during the battle of Normandy.

Like many ex-servicemen, he had experienced the close comradeship of the war years and had intended to keep in touch after leaving the forces. Inevitably, work and family priorities intervened. However, almost thirty seven years after the end of the war, he realised that, apart from little-known localised groups, no national association was in existence to commemorate or advance any bringing together of Normandy veterans.

An organisation which would allow veterans to enjoy the same spirit of comradeship that they had experienced during the Normandy campaign was the motivation which brought about the need to bring into being the Normandy Veterans Association.

The inception and creation of what would become the premier association representing the ex-service personnel who took part in one of the most momentous battles of the second world war would, at that time, have been far beyond the aspirations or expectations of Eric Bulman and his three comrades. There is only one surviving member of the original group and that is Ken Collins who still lives in Humberston, near Cleethorpes.

Surprisingly, little evidence has been brought forward regarding the inauguration. Action has been taken to place on record as much information as possible for historical reasons and in order to correct misunderstandings that have occurred in the past.

It was in 1984 that Eric Bulman was instrumental in organising the 40th anniversary commemorations of the Normandy landings. This led to some embarrassment for the MOD2, who intervened, subjecting him to a liaising role with them. The ceremonies which took place, in the presence of the Queen, were of national and international importance. No official recognition was ever given to the man who initiated the commemorations.

Through the passage of time, the Association has become of global significance with members in many countries. Members have been enabled to enjoy continuity of comradeship, remembrance and support for those in need. Being elevated to historic prominence has resulted in the Association becoming part of our military history.

The Association and its members are admired and respected by a grateful nation. Inevitably, members are becoming fewer. Eventually there will be none. However, the legacy of what men like Eric Bulman and his comrades did both during and after the war, will live on.

The Original Four Members of the NVA

Arthur Flodman, who later became the first National Secretary, was one of ten men who attended the second meeting of the Normandy Veterans Association. The main reason for the formation of the NVA was that the D-Day Landing Association membership requirements only allowed those that had landed on 6 June, 1944, to be members. As the landings took place over a period of time, this excluded many thousands of servicemen. Arthur Flodman, on behalf of the fledgling association, went on to put an advert in the Grimsby Evening Telegraph to announce the formation of the NVA.

There was a lot of opposition to the setting up of the Normandy Veterans Association, particularly from Regimental Associations who feared that they would disappear. This was never intended, but Arthur Flodman travelled around England and wrote many letters and made numerous phone calls calming the fears of many. Even the D-Day Landing Association thought they would lose their membership and Arthur's son got him to go to a meeting in Newcastle to speak with them. Thankfully it resolved any opposition.

Arthur later designed the National Badge and Flag, for which he gave the copyright to the NVA. In the design he used a predominance of gold out of respect for the fact that Gold Beach was the name given to one of the beach landing sites. Arthur Flodman attended the 40th Anniversary celebrations in France in 1984; but ill-health caused him to hand over the National Secretary's responsibilities to Eddie Hannath, who subsequently did a fabulous job. Arthur sadly passed away in November 1985, and a memorial service was held in St Peter's Church, Cleethorpes, where there is a stained glass window incorporating the NVA badge.

Veterans and their spouses meet on the first Wednesday of the month at Westward Ho barracks in Grimsby. All newcomers are welcome to attend.

In 2004, on the 60th anniversary, members attended the functions in Normandy, where they paraded in front of Her Majesty the Queen and other dignitaries. This was televised by the BBC worldwide. Later, on the same visit, all the veterans were presented with a named chest badge from the Mayor of Colville Montgomery.

There was a memorial service at York in August 2004, attended by all the local groups. In October that year there was also a service at St Paul's Cathedral in London and later, a reception with the Lord Mayor and the Duke of Gloucester at the Guildhall.