Swimming the English Channel Content from the guide to life, the universe and everything 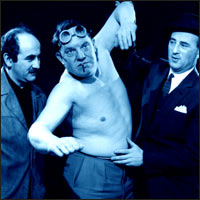 Amongst marathon swimmers the English Channel is considered the ultimate challenge.
- Duncan Taylor, Secretary of the Channel Swimming Association.

Every year, hundreds of people attempt to swim1 across the English Channel2, inspired by - what? Undoubtedly it's a challenge. The English Channel is 34km (24mi) wide at the shortest point, from Dover to Cap Gris Nez - the swimmer's equivalent of climbing a mountain. Whether it is brave or foolish to attempt the marathon swim unescorted, people still try, even though the success rate is lower than 10%.

People wishing to make an attempt to swim the English Channel must first prove that they are capable of completing it by a series of swims in trials totalling more than the distance required. The training is intense, with eight-hour swimming sessions in cold water to ensure the body is acclimatised to the very cold sea (the temperature of which is about 15°C/59°F).

The dangers speak for themselves: besides hypothermia and the risk of cramp, which can strike the fittest athlete at any time, there are external horrors to contemplate such as jellyfish and raw sewage. Then there are the 600 commercial ship movements and 80 to 100 ferry crossings between Dover and Calais every day to avoid. The weather is another problem - no matter what the local forecast says the conditions are going to be, they can change very quickly, even if the prediction is correct to begin with.

The tide is hard to predict, as it changes direction every six hours or so and the currents are very strong. If you get the timing wrong, then even if you're in sight of the coast at that stage you might as well give up, because you'll only be going backwards. In 2001, the coach of the Liechtenstein triathlon team, Swiss-born Ueli Staub, 37, spent 16 hours in the water before disappearing close to France in seven-foot-high waves. Rescue teams were unable to trace him and his body was washed ashore at Ostende in Belgium a week later.

The first (verified) person to make an unassisted swim across the Strait of Dover was Captain Matthew Webb on 25 August, 1875. His time was 21 hours and 45 minutes, a time which has since been improved upon considerably, but Webb retains his place in the history books as the first recorded successful English Channel swimmer.

The first woman to swim the English Channel, American Gertrude Ederle, went from France to England in August 1926 at age 20. Due to atrocious weather conditions, Ederle ended up swimming 56km (35mi) to avoid swells. Her time of 14 hours 30 minutes held the women's record for 24 years. In 1950, Florence Chadwick swam 37km (23mi) in 13 hours and 20 minutes, breaking Ederle's record. Ederle died at the age of 98 in December 2003.

The first person to swim the Channel underwater vied with his own wife for that record. The first ever underwater attempt was by Jane Baldasare in September 1960, who got three-quarters of the way over (under) before being forced to surface when a tank change went wrong. She tried and failed a second time before her husband, American Fred Baldasare, successfully completed the feat in July 1962.

The first recorded person to have died during a crossing was Ted May in 1954.

The current world record holder for the fastest Channel swim is Christof Wandrasch, a German athlete, who completed his swim in seven hours, three minutes and 52 seconds in August 2005. The youngest to make the crossing is Brit Thomas Gregory, who was 11 years old when he succeeded in 1988. The oldest swimmer is George Brunstad who swam across in 2004, aged 70 years and 4 days in a time of 15 hours 15 mins.

The holder of the record for most crossings is Alison Streeter who has chalked up over 40 successes, starting when she was 18 years old. When she reached the French coast on her 39th crossing, she walked into a local restaurant and asked for a beer. Declining the French coin she had kept under her swimming cap, the staff gave her the drink gratuit4.

Streeter is one of the very few people who have done it non-stop both ways - kind of like a booze cruise without the booze or cruising. Incredibly, she has chalked up a triple crossing, taking only a 10-minute break during that particular endurance feat. Alison completed seven Channel swims within five months in 1992.

Speaking about her only failure, Streeter, 42, said:

It was my 31st attempt and the weather was really shitty, far too windy, really. I shouldn't have gone, and had to give up. But in a way it was good not to complete it. I was getting far too confident after 30 crossings and here was the Channel smacking me in the face and saying, 'Have some respect'.

In 1905, Australian professional swimmer and film star Annette Kellerman (1886–1975) was the one of first women to attempt to swim the English Channel, but after three unsuccessful attempts she gave up, saying 'I had the endurance but not the brute strength'. This was no wimp, she later dived 92' into the sea and 60' into a pool of crocodiles during her Hollywood film career.

The 'non-sporty' TV star of Little Britain undertook a challenge to swim the English Channel for Sport Relief. People started sponsoring him while he was training under the guidance of Olympic pentathlete Greg Whyte, and Walliams was aiming to raise half a million pounds. Before he set off, Walliams appeared on the Richard and Judy show drumming up support and the pledges rolled in. He got a lot of support from BBC Radio 1 too. The presenters kept telling listeners to text in to support him (some of the money from each text went to Sport Relief) and he guest-starred on the station at least once talking about his planned attempt. A Radio 1 representative was in the support boat and in contact with the station by mobile phone so the listeners had regular updates. Walliams completed the crossing in 10 hours 34 minutes, ranking in the top 50 fastest of all time. In all, £1 million was raised for Sport Relief. It was a phenomenal achievement for someone with hardly any long-distance swimming experience.

I have never done anything sporty in my life. I was always useless at sport at school. It was like my body said 'Well you can have one day of exertion' and that day was today.
- David Walliams

As well as the kudos at completing the challenge and raising all that money for charity, Walliams was presented with a 'Pride of Britain' award for 'the country's most inspirational public figure' of 2006. He was also given a special award at the 2006 BBC Sports Personality of the Year presentation.

1As opposed to jump, like Ron Obvious, a character from a Monty Python sketch. He's an idiot who's always trying to do impossible feats like eating an Anglican church, running to Mercury, and jumping the English Channel.2The French call it La Manche.3Known as 'Channel grease', it is a mixture of Vaseline and wool fat.4On the house.