The Rutles - the Band Content from the guide to life, the universe and everything 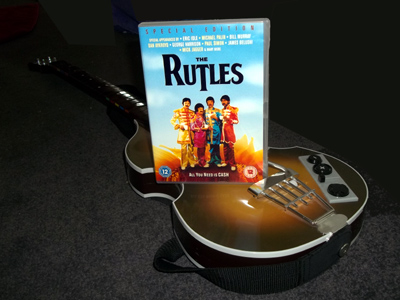 The year is 1959. A chance meeting between two would-be musicians on the streets of Liverpool sets in motion a chain of events that leads to a worldwide revolution in popular music...

'A Legend that Will Last a Lunchtime'

The two musicians were Ron Nasty (piano, guitar, vocals) and Dirk McQuickly (bass, vocals), who soon recruited three like-minded individuals to join their fledgeling band: Stig O'Hara (guitar, vocals), Barry Wom1 (drums) and 'Leppo' (having a good time). The band's early days were spent largely in Germany, at the request of their first manager, Arthur Scouse. In a mammoth 15-month stint, they played nightly at the Rat Keller club in Hamburg until they could escape back to Liverpool. Sadly, Leppo had been left behind in the chaos.

'A Couple of Jam Butties2 and a Beer'

Buoyed by their German experiences and drugs, the band managed to secure a slot at Liverpool's Cavern Club. Here, in 1961, they were spotted by one-legged war veteran Leggy Mountbatten. Although he was less than impressed with their musical ability, Mountbatten saw enough promise in their trousers to sign them for the rather whimsical fee demanded by Ron Nasty on the spur of the moment. Mountbatten immediately began hawking the band's demo tapes around the record labels of London.

After numerous rejections, the band's cause was finally taken up by Archie Macaw. He put them in touch with producer Dick Jaws, who signed the band up for the remainder of their natural lives. From there, the band went straight into the studio and recorded their first album within 20 minutes.

'The Most Exciting 20 Minutes of My Life'

'Rutlemania' - as it was dubbed by the media - hit Britain in 1963, with a string of Number One hits from the 'Pre-Fab Four'. The following year, the Rutles spread their influence across the Atlantic, where 10,000 fans were waiting to welcome them to New York's Kennedy Airport3. A year later the band returned to the USA to play the world's first outdoor rock and roll concert.

Not content with dominating the music world, the Rutles also found time to become film stars, appearing in A Hard Day's Rut, Ouch and the less successful Tragical History Tour. In 1966, however, the Rutles faced their first real critical backlash. In an interview, Ron Nasty was heard to claim that the Rutles were 'bigger than God'. Ron, in fact, said no such thing, his comment actually referring to Rod Stewart, the then-unknown singer who would later become frontman for The Faces. Before they realised there had been a mistake, a concerted hate campaign had been set in motion, with people buying Rutles albums simply to burn them on giant bonfires. Eventually, Ron issued an apology, the furore died down and the Rutles completed what was to become their last tour.

'A Millstone in Pop Music History'

It wasn't long before the Rutles were involved in another scandal when, in the summer of 1967, they became friendly with American singer/songwriter Bob Dylan. Dylan was responsible for introducing the Rutles to the illicit substance that influenced some of their greatest work: tea. When Dirk publicly confessed to using and enjoying tea - and, indeed, biscuits - there was a public outcry.

Meanwhile, Stig had become deeply interested in the teachings of the mystic Arthur Sultan, who took all four Rutles away to an isolated hideaway near Bognor to seek spiritual enlightenment. Their retreat was cut short, however, by the tragic news that their manager Leggy Mountbatten had emigrated to Australia to become a teacher.

'To Help People to Help Themselves'

While still recovering from the loss of their manager and rebuilding their image after the series of scandals, Nasty and Dirk founded the charitable 'Rutle Corps'. Unfortunately, the foundation simply haemorrhaged money as people set about helping themselves. With the financial affairs of the Rutles in ruins, relationships between the band members deteriorated to the point where, by 1970, each member of the band was suing every other member of the band4. With the release of the band's last album - Let it Rot - the Rutles story came to an end.

Hang On. This all Sounds Strangely Familiar...

'All My Friends are Pirates and They Sail the BBC'

In 1975, two ex-members of British institutions were milling around the BBC with some time on their hands after the break-ups of their respective groups. Eric Idle, late of the Monty Python team, and Neil Innes, formerly of the Bonzo Dog (Doo Dah) Band, had worked together previously on some late episodes of Monty Python's Flying Circus and the film Monty Python and the Holy Grail. When Idle began a new comedy series - Rutland Weekend Television - based on a small, under-funded regional television channel, he invited Innes along to provide the musical numbers5.

The Rutles first appeared briefly as part of a sketch about love, featuring a supposed video of the song 'I Must Be in Love', filmed in the style of the Beatles' film A Hard Day's Night. Somewhat bizarrely, however, the sketch was first seen in the USA as part of the Python-inspired Saturday Night Live show, some six weeks before the episode of Rutland Weekend Television was shown in the UK. When Idle returned to the States to host Saturday Night Live in 1977, Innes also appeared, in character as Rutles pianist Ron Nasty. The success of the Rutles sketches provided the encouragement for Idle to turn his idea into a feature film.

I'm not throwing caution to the winds, oh, no
Love is not an easy game to play
Though I may not be a man of words, yeah, yeah
There is one thing I feel obliged to say
- 'It's Looking Good' (from Rutle Soul)

The resulting film - All You Need is Cash - was filmed on a shoestring budget. For anyone even remotely familiar with the Beatles, the film is an affectionate, satirical look at the media frenzy that accompanied them around the world in the 1960s. Buried in the film are references to most of the major events of the Beatles' career, as well as hundreds of more subtle references that may be obvious only to more hardened Beatles fans. Some of the more blatant examples include an early member before they became famous (the Rutles' Leppo or the Beatles' Stuart Sutcliffe), the shortening of the drummers' names (Richard Starkey to Ringo Starr; Barrington Womble to Barry Wom) and the rumours of the mysterious death of a bandmember.

The Pre-Fab four themselves were played by Idle (Dirk McQuickly), Innes (Ron Nasty), Rikki Fataar (Stig O'Hara) and John Halsey (Barry Wom). The latter three also performed the music for the film, along with Ollie Halsall (who also played 'Leppo' and, confusingly, the Rutles drummer 'Kevin' in the early sketches) and Andy Brown. The Rutles' songs were all written by Innes, who prepared a series of stunning pastiches of Beatles' numbers, from the innocent love songs of 'Hold My Hand' and 'With a Girl Like You', to the Penny Lane-inspired 'Doubleback Alley' to the Lennon-esque nonsense of 'Piggy in the Middle' and 'Good Times Roll'. The songs from the film were released as an album (The Rutles), which reached Number 63 in the USA and Number 12 in the UK. The album was also nominated for a Grammy award for Best Comedy recording in 1978, losing to Steve Martin's A Wild and Crazy Guy.

'A Film, an Album and a Lawsuit'

At the time that All You Need is Cash and The Rutles were released, the rights to the Beatles' back-catalogue were owned by publishing company ATV. Missing the point by several miles, the company sued the producers of the Rutles' music for infringement of copyright. Rather than fighting the case, the decision was made to hand over half of the rights to the Rutles' songs to ATV, instantly halving Innes's income from his music. As a final insult, Innes was obliged to add the names of Lennon and McCartney or George Harrison to the writing credits on his songs.

Narrator: Do you think they'll ever get back together again?
Mick Jagger: I hope not.

With a less-than favourable reception for the film in the USA and disppointing album sales, Idle's creation was poised to disappear into obscurity. The Rutles were rescued by the introduction of the new-fangled technology of the VCR and video in the early 1980s. Suddenly, All You Need is Cash was available again, and began to develop a substantial cult following. Such was the success of the re-issued film, that record label Rhino secured the rights to the Rutles songs and issued a new CD, including six Rutles songs that had not featured on the original LP.

The Rutles' popularity received another revival when, during a Monty Python retrospective in 1994, a concert was arranged featuring a tribute band called 'Ron Nasty and the New Rutles'. Innes was present at the gig and was taken aback by the tremendous reception his old Rutles songs received. At the same time, the surviving Beatles were releasing a host of unreleased tracks, out-takes and demos under the 'Anthology' banner, which got Innes thinking. The result was the single 'Shangri-La', shortly followed by Archaeology, an album of new 'Rutles' numbers, performed by Innes and the original members of the band.

2002 saw the release of the film The Rutles 2: Can't Buy Me Lunch, which was essentially a series of clips from the original film together with a series of inteviews and some of the music from Archaeology. In the film, celebrities such as David Bowie, Billy Connolly, Carrie Fisher, Steve Martin, Salman Rushdie and Tom Hanks speak about the Rutles, their love of their music and the influence the band had on their careers. The film was not terribly well received by fans, with many feeling that it was a tired rehash of the same jokes featured in All You Need is Cash.

At the time of writing, All You Need is Cash is available on DVD and both Rutles albums are still in the shops. There is also perennial talk of a Rutles tour, but as yet nothing has materialised. Still, that's not bad going for something that started out as a five-minute comedy sketch on a 1970s television show.

Like ice in a drink, invisible ink
Or dreams in the cold light of day
The children of rock 'n roll never grow old
They just fade away
- 'Good Times Roll' (from Sergeant Rutter's Only Darts Club Band)

1Real name, Barrington Womble.2Sandwiches, in British slang.3Sadly, an administrative mix-up landed the band at La Guardia Airport instead.4And, in Stig's case, also suing himself by mistake.5Although the show's most famous number - 'The Pirate Song' - was written by Idle and George Harrison and performed by Harrison on the show's Christmas special.6Whose then-wife Bianca also appeared in the film.