Friends and Friendship Content from the guide to life, the universe and everything 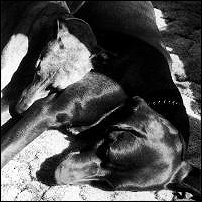 In the sweetness of friendship let there be laughter, for in the dew of little things the heart finds its morning and is refreshed.
- Khalil Gibran - author of The Prophet.

This Entry is about real-life friends as opposed to online friends, so hopefully this Entry will inspire you to turn off your computer and go visit one.

Most people know the saying A man's best friend is his dog; and that Diamonds are a girl's best friend. However, dogs can't offer advice or make you a cup of tea when you need one; and precious stones are cold comfort when you need a hug, a shoulder to cry on and a sympathetic ear.

There are many ways to describe a friend. A friend is a reflected soul. Friends1 are the family you can choose for yourself. Friends are a much better medication than medication is, and people who spend time with friends are happier with their lives as they are less lonely.

You aren't limited to the number of friends you can have, although it's probably a good idea to limit the number to however many birthdays you can remember, or how many birthday presents you can afford to buy.

A good friend will put you to bed when you've passed out through having a few-too-many, ensure you're not laid on your back, and remember to remove your shoes. You should be able to tell a true friend2 anything without being judged by them.

How do Friendships Begin?

This is an easy question: you find someone else (usually the same gender/age-range) who has similar interests to yourself. However, the circumstances through which this occurs are easier for some to cope with but more difficult for others. You now have another person to talk to about your shared interest but remember they like to talk too, so be prepared to shut up and listen once in a while. Hopefully they will have other friends and will introduce you to them, thereby expanding your circle.

Friendships which begin due to location, for example, next-door neighbours or school classmates, rarely survive transitions such as moving to other neighbourhoods, schools, colleges, jobs, emigration, and so forth. Attend a school reunion and you'll wonder what on earth you ever had in common with these people other than your age, although it is possible to have a friendship with someone you met at school, mutually maintain it, and eventually become godparent or 'uncle' to each others' children.

How Friendships are Maintained

To have a friend you must also be a friend - and be prepared to be there for them should they need you. Failure in this respect would label you a fairweather friend and you would most probably be dumped.

Like every other relationship you have in your life, there are boundaries you shouldn't cross with your friends. One of those is money: don't lend to your friend and don't ask for a loan yourself. They won't like it if you sleep with their sister/brother/mother, and then hear about it from someone else. Certainly don't sleep with their current partner, even if you did it because you think they are a bad match. Splitting them up this way would cause double the pain because your proud friend would dump you too.

Friends are unpaid counsellors - but phoning them at 2am because you're awake and fancy a chat is not a good idea. Neither is phoning them at 10am if you know they're a shift-worker. Friends are people who need some space and quiet time. Generally, it all boils down to mutual respect and understanding.

It's not a good plan to interrupt your friend while they're on a date/on holiday/attending an orchestral recital/at a funeral, if you're having a crisis. This is what blood family are for. They will forgive you.

Friends are not people you sleep with - those people are called lovers and they're a whole different ball-game. Friends are the ones you complain to about your lovers, so it's not a good idea to have sex with them. Real life rarely turns out like When Harry Met Sally3 as both participants will probably be embarrassed, or one will want more from the new relationship than the other, resulting in a stony silence and a changed mobile phone number.

If this happens and you're both lucky enough to realise your friendship is worth more than letting a small thing like a one-night stand come between you, then blame it on the booze and move on, never speaking of it again. Certainly don't have tête-à-têtes in the pub loo with their next date, about your friends' shortcomings/attributes; unless you're jealous, of course, in which case you need to re-examine the whole relationship dynamic.

Of course, this doesn't mean that it's absolutely impossible to know someone well and then fall in love with them, but this can also feel like losing a friend even though you've gained something much better.

Resist the urge to talk to your friend about a mutual friend who is your/their lover. It's most disconcerting and will put an image in their head they won't be able to forget. Don't tell them you fancy their mum/dad/both, even if you do.

Trust is the most vital element in any relationship. If you're not trustworthy then you probably don't deserve friends, so try to remember that you promised to see that naff film with them or applaud them at their first attempt at a karaoke or an Open Mic night. If you have promised to look after their clothes while they go for a streak, then make sure you do. You might like to carry enough cash to bail them out too, as you never know when that situation might be reversed.

Don't lie to your friend: if they know you well they'll know you're lying or will at least be suspicious. If you find out something that you know will hurt your friend, be tactful. Do they need to know? Would they appreciate knowing? Can you tell their Mum so she can break the news? Cowardly, yes, but Mums usually have a much better way with words. Remember, if you do decide to tell them, and it's painful, they will likely as not need some time alone, after lashing out at the closest thing - you. In that case play the waiting game. Then don't beat them up about it afterwards.

A Friend for Life

Strong friendships can last a lifetime with care and consideration. The benefits are multi-fold; you've got someone to share birthday cake with, and especially for single people, a pub meal or a trip to the cinema is no fun alone, is it? Plus it's always nice to know there's someone there for you, as you're there for them, through the bad times as well as the good. Altogether now:

- lyrics by Lennon/McCartney
from the song 'With a Little Help from My Friends' on the album Sgt Pepper's Lonely Hearts Club Band by The Beatles.

1We are so not talking about the American sitcom called Friends.2Metaphorically, a true friend is one you bring your problem to like a sack of wheat and they help you blow the chaff from the seed.3A film about two friends who become lovers, starring Meg Ryan and Billy Crystal.