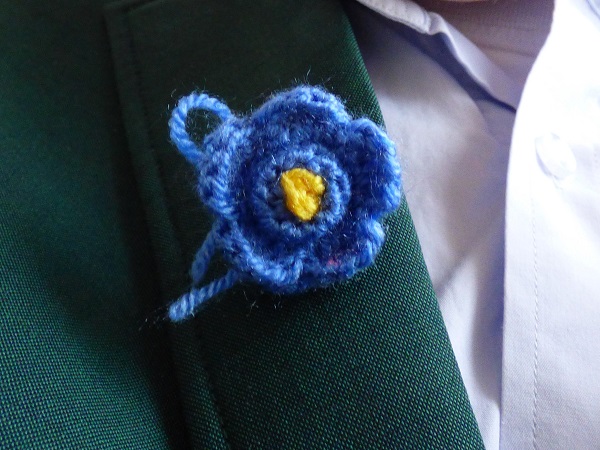 The h2g2 20th Anniversary Meet was a bit like Christmas - the event was months in the planning, but the day itself arrived eventually. I was hopeful of having a good time, as I knew I wasn't the only one planning to lurk in the pub during the Saturday Afternoon Session, but I still wasn't 100% confident that everything would go well. It was great to read in The Post that everyone had a good time. Here is a description of the Meet as I experienced it.

Pleasingly, the day started off well as the train journey to London was smooth. It took longer to get out of the destination station than expected, as there had been a number of changes since I was last there so I couldn't find the right exit, but I managed to arrive at the Meet venue not much after 12noon. I entered the pub via the accessible entrance and was wondering what to do, when I spotted a t-shirt with h2g2 on the back and realised it was being worn by Superfrenchie!

I was somewhat dismayed to discover that the badge I had made for the Name Badge Competition (which was a copy of my Join the Q logo) had fallen off my lapel somewhere between home and London, but Superfrenchie kindly supplied me with a crocheted petunia to replace it. She also provided me with my very own amigurumi Pinkie Pie Pony to go with my collection of Brony merchandise so I am very honoured and grateful! Superfrenchie's superpowers had also ensured we were able to sit comfortably - '"We knew you needed wheelchair access, but not that you needed wheelchair friendly tables", said the guy' but that was easily fixed.

Milla was next to arrive. It was great to catch up in person properly, as we had only briefly met at the 2014 Manchester Meet but have corresponded regularly via h2g2 since then. Fellow pub-lurkers cactuscafe and minorvogonpoet turned up next. I was glad of the opportunity to speak to them in the small group, so the conversation flowed as well in real life as our conversations online. I was fascinated to learn that cactuscafe and minorvogonpoet looked just as I imagined them, except mvp matched my mental image of cc and vice-versa!

It was an honour to meet paulh next, as he had travelled over from the USA for the day. It was also excellent to meet ismarah - we had interacted a bit via @h2g2_Guide on Twitter, but not via h2g2 itself, so it was good to speak in person. I learned a new phrase from Milla, 'Because reasons', and had cause to use it sooner than expected after lunch. The fish-finger sandwich I had was very tasty, and the fries were particularly good, but while ismarah was ready for more after having eaten a Quesadilla, I was having a little panic as I felt very full. I could have gone into tedious detail1 about why my stomach was too small to contemplate eating doughnuts that day, but 'Because reasons' fit the bill perfectly!

After lunch, the Meet got busier. I was pleased to meet Sho, minichessemouse and Z, then Researcher 5 arrived just before cactuscafe and minorvogonpoet left. I did some mingling, was very glad to be able to speak to Gnomon in person for several minutes, and had chats with Icy North and Florida Sailor, whom I had met in London in 2014. What with one thing and another, I wasn't able to get round to speak to 2legs, but I said hello to W, and I greeted a few others including Bald Bloke and Mol.

I was very pleased and honoured to be able to spend some time talking to Researcher 5 about life, the universe and everything h2g2, and then it was 5pm so I left to return to the station for the journey home while the Meet continued into the Evening Session. It was a tiring day, but everything went well indeed - even better than I had hoped! A great way to celebrate h2g2's special birthday!

1I spent an impolite amount of time at an event last year talking about the challenges that follow recovery from eating disorder, but to be fair my neighbour at the dinner table chose 'You're thin' as the conversational opening gambit, and we had a lot in common...