As I hadn't been to a London meet-up since 2001, and only the Manchester one in the last decade, it was probably time that I did. Especially as London is one of the few places I can get to and back in a day, even if the meet-up takes place during term time. When I heard that Florida Sailor was coming all the way over from Florida to attend a meet-up in London, I had no excuse not to come.

So on Saturday 27th September I caught a train oop North t'London1 to Waterloo, Abba's favourite railway station. After a short walk I arrived at the Imperial War Museum, the location of the meet. Here I headed for the pre-arranged meeting point, the large guns outside the main entrance.

I arrived just before 12:30pm and promptly met SashaQ, who I'd previously met for a chat one day in Southampton. And no-one else. So we caught up for a pleasant twenty minutes or so, waiting for Florida Sailor and everyone else to turn up.

I kept an eye out for people who looked h2g2-like (this normally involves a group of people wearing glasses). Sasha tried phoning MMF to no success, while I had a good look round, but no-one looked like FS'

dolphin smiley, and I wasn't prepared to go up to all the people waiting next to the guns and say 'Hello Sailor'...

Fortunately we found the rest just before 1pm - they'd perhaps not unreasonably decided to have a look around the museum, while MMF waited outside the cafe. Both MMF and Florida Sailor were wearing old blue BBC h2g2 t-shirts, while I was wearing my even older pre-BBC alabaster h2g2 t-shirt, which somehow still almost fits after 15 years2.

As it was nammet time Sasha bought a pizza3 and I had a drink. Soon after MMF told me that he hadn't heard anything from Bluebottle, but then to be fair neither had I.

After a chat over a coffee Solnushka and famous toddler arrived, as no guide to a London attraction could possibly be complete without them. (This had taken a little longer than expected, as there were two cafes in the Imperial War Museum, and Solnushka was waiting by the other one. Fortunately she was found by Bald Bloke and I, also known as BBBB for short). After some more chatting and hiding behind legs we decided to actually look inside the museum – we might as well while we were there.

Forbidden Journey To The Centre of the Museum

So just before 2pm we entered the museum, where I learned that the bit I'd most wanted to see, the Great War exhibition, was by time-allocated tickets and as I hadn't pre-booked, there went that idea. Still we headed up to the 2nd floor – all except for Florida Sailor, who was hiding somewhere. Soon after we came face to face with a puppet the spitting image of Margaret Thatcher before following the large, friendly letters advertising the Top Secret exhibition on spies.

When someone designed the Top Secret gallery, it seems as if a committee had thought to themselves,

All other major museums have flat floors, what can we do that'll be different? How can we make our museum feel like the Crooked House at Blackgang Chine? I know what, let's have all the floors slope at inexplicable angles for no reason whatsoever.

The display was truly fascinating, containing the history of spying and espionage since the Great War with an enigma machine hidden in the middle, but I think even Florida Sailor would have come out feeling seasick.

Outside the exhibition we headed towards the section dedicated to the Cold War. There I heard I think Florida Sailor talking to either Bald Bloke, MMF or Icy North, and I distinctly heard one of them say something like 'Shoo! Shoo!' which sounded a bit rude considering the distance he had travelled to be here. They all vanished soon after. I remember talking to Solnushka and SashaQ about When The Wind Blows, one of the most moving books and animated films ever4 but very soon after that, both Sasha and Solnushka5 also disappeared. I suddenly realised that I was all-alone. In a nuclear war zone. And everyone I knew had gone...

Fortunately we had arranged to meet-up back in the cafe at 4pm, so after a wander around the extremely crowded museum (where I kept expecting to bump into everyone, but didn't find them at all) I went out just before 4pm and soon everyone was safely gathered in again. Apparently Florida Sailor had had a shoe-event horizon moment where his shoes had disintegrated, and so he and some others had gone off to get a new pair. So no-one had said 'Shoo! Shoo!' at all, but instead were talking about shoes. To this day6 I've no idea where Sasha went, but still think we had all been disorientated by the uneven Top Secret exhibition.

It was at this time that MMF had a profound realisation that what we all needed to do was take photographs of a bin, and compare to see which looked the most realistic. In hindsight it seems so obvious, but it hadn't actually occurred to me. Here is the photograph of a bin that I took, and I hope that the other photos will be added to post articles too.

Sadly soon after Sasha had to leave in order to catch a train back, which is a shame as I'd've really enjoyed a longer catch-up, but there's sadly never enough time at meet-ups.

Shortly after Sasha left it was decided to head to the Head - Shakespeare's Head, a pub in the city centre. This involved travelling on a bus and the use of new-fangled Londony things called 'Oyster Cards'. I'd not used an Oyster card before and Icy North kindly lent me his. After a little while we found a large round table in a booth, and Pink Paisley arrived, having ordered Naked Ladies while Icy North swallowed his (London) pride, and food was bought by all. Florida Sailor disappeared again, possibly to look for a church from My Fair Lady, but when he returned very kindly distributed Florida state flags, and MMF gave out h2g2 badges that had undergone a long and complex journey to be there, involving Pastey and Superfrenchie, but I didn't quite follow.

Pink Paisley had to leave after dinner, and just as it was getting time for me to leave to catch my train home, Tufty turned up, unannounced. I'd enjoyed chatting to Tufty back in 2012, but only had the opportunity to say a very quick hello before I had to dash off to catch a train home, and Icy North left at the same time too as he also needed to catch a train from Waterloo. After a chat on the bus to the station, he rushed off to catch his train and I arrived with ten minutes to spare before my train left.

Another very enjoyable meet, and I look forward to the next one I can get to. 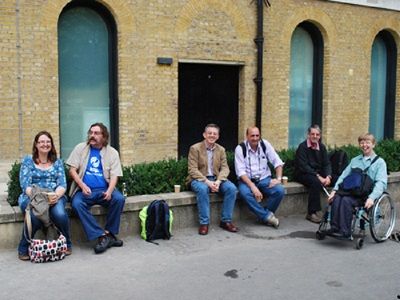 1It's north from my point of view, so there.2Soon after he saw me wearing my original h2g2 t-shirt, MMF took his off. I wonder whether he felt his was inadequate?3The Imperial War Museum, apparently unable to decide whether or not they should dispense disposable plastic or real metal cutlery, had compromised and provided a plastic fork, which promptly snapped, and a metal bread knife, which was incapable of cutting through anything more solid than a remark.4You thought that the first few minutes of Up, the death of Bambi's mother or the loss at sea of Elsa's parents were emotional? Pah! Try watching When The Wind Blows followed by Watership Down and Plague Dogs.5I thought I caught a glimpse of Sol heading to the stairs, which I can understand. If I was a toddler in a building with a five-storey staircase, that's where I'd want to play.6About 2 days later.