It was my privilege this year to write an Entry for the Edited Guide about my favourite strongman, Eddie Hall. I had followed his career for some years, and then I was amazed and impressed at Christmas/New Year 2017/18 to discover that he became the World's Strongest Man in May 2017 after seeing off the competition from Hafþór 'Thor' Björnsson (who plays Sir Gregor Clegane aka 'The Mountain' in the TV series Game of Thrones) and the previous year's winner Brian Shaw.

Fellow Researcher FWR kindly mentioned to me (on condition that I wrote it up for The Post) that Eddie was on tour during 2018 and would be visiting New Brighton on the Wirral for 'An Evening with Eddie Hall'. FWR wasn't able to go, sadly, but I was able to get tickets for me and my mum.

I hadn't been to New Brighton for years (only once or twice since the days when I used to go to the beach and the Bright Spot amusement arcade as a child), so it was a fascinating experience to go back. Modern new restaurants provided plenty of choice for dinner on the warm summer evening, and then it was pleasant (albeit further than it looked) walking from the promenade to the theatre past the Bright Spot (that was pleasingly still there and looked a bit more cared for than it had done last time I had seen it).

The theatre foyer was impressively large but easy to navigate so we made our way to the room. We were a bit early, but that worked out well - the seats were not numbered, so we were able to bag a good space just a few rows from the front. Coincidentally, we were joined by a neighbour of mine whom I had seen but not spoken to before - she was also there with her mum, so we all had a good chat before the show began.

The MC took to the stage to tell us about the agenda for the evening, and then he welcomed Eddie Hall, to rapturous applause from the audience.

When it was time for Eddie and the MC to take their seats and start the chatshow-style interview, Eddie discovered that the theatre had not been able to provide him with a chair large enough to accommodate both his legs! He managed to perch in it satisfactorily without getting stuck by judiciously rearranging his genitals and sitting somewhat sideways. Some members of the audience sympathised - quite a few superfans (strongish men with the same haircut as him) found that, even though they were not quite as muscular as Eddie, the chairs in the auditorium were similarly inadequate so they had to sit on two each - one for each buttock.

Once everyone was sitting as comfortably as possible under the circumstances, the show began. Eddie's language was stronger than I expected from what I've seen on TV, but he was a great motivational speaker even so. I knew quite a bit about his journey to becoming the World's Strongest Man from having researched my Entry, but it was very powerful hearing him talk about how weightlifting gave him purpose in life as he learned much more easily from talking to people at the gym while working out than from trying to sit still in a classroom at school.

Eddie also talked about the gruelling regime he undertook every single day in the years leading up to his big win. From eating raw steak at 2am to sitting in an oxygen-rich atmosphere for hours to help him recover from vigorous training sessions, preparing for the competition was a serious business.

Goals are important to him to help him avoid depression and stay motivated, so the audience was keen to know what he was planning next, now that he had achieved his ambition of becoming the strongest man in the world and had officially announced his retirement from the World's Strongest Man competition. He assured us that he would be fine as he is following in the footsteps of Arnold Schwarzenegger - we all need to keep a lookout as he will be appearing in films soon enough!

All in all it was an entertaining and inspiring evening. To finish the day superbly we emerged from the theatre to see a stunning sunset - glorious. 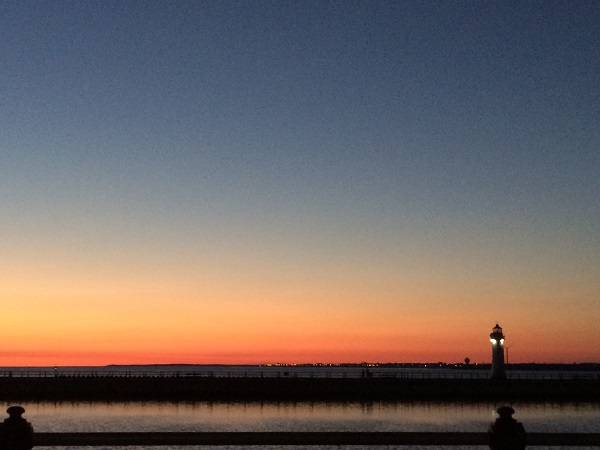