Eddie Hall - World's Strongest Man 2017 Content from the guide to life, the universe and everything 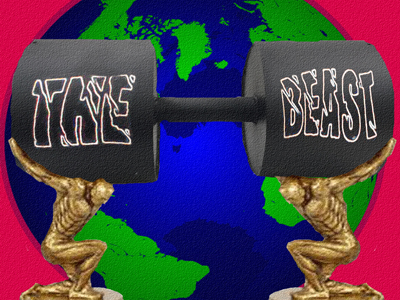 Eddie Hall, from Staffordshire in the UK, had a childhood dream to become a superman. At the age of 19, he started working towards this goal. He achieved his dreams ten years later, when he won the 40th World's Strongest Man competition in 2017.

Everybody wants to be Superman1.

Eddie Hall was born on 15 January, 1988. He developed a taste for winning from an early age when he was a successful competitive swimmer. However, his career took a different turn when he stopped enjoying being coached and taught - he gave up swimming and took up weightlifting at the gym instead.

He got a job as soon as he was able to leave formal schooling and became a truck mechanic. At the age of 19, already sporting the shoulder tattoos that would later help to define his image on the world stage, he entered a local strongman competition. Placing fifth, he knew he could do better, so kept on competing.

Eddie is a family man - he married Alexandra, a hairdresser2 and recruitment consultant, in 2013 and they have two children.

I don't wanna be an average guy - I wanna be extraordinary.

In 2013, he took part in the World's Strongest Man heats, but was not successful in getting through to the Final. In 2014, he qualified for the Final and placed sixth. That year he also achieved a lift of 461kg in the Deadlift3 but was disqualified for dropping the bar because he was too excited to celebrate what he thought was a world record so didn't finish the lift correctly. Keen to do better, he decided to leave his job and become a professional strongman4.

This paid off. He had a better time at the Deadlift World Championships the following year, when he lifted 462kg successfully to take the World Record indisputably. 2016 saw an even more massive achievement when he lifted 500kg to break the World Record in style, although this resulted in him briefly losing consciousness, while his nose and eyes bled from the force of the effort.

Also in 2015, he achieved an impressive feat in the World's Strongest Man Final, completing the Atlas Stones in 24 seconds. A traditional feature of strongman competitions, this event requires competitors to lift five stone spheres from the ground and place them on top of barrels within 60 seconds. However, this achievement was not quite enough to secure him a place on the winner's podium, as he came fourth.

Eddie's attempt at World's Strongest Man 2016 started less well when three of his fingers were dislocated during training for the heats. The audience could see how much pain he was in as he struggled to do his best in the final. Even with the injury, he lifted a massive 445kg in the Deadlift and did well in the Atlas Stones, securing him third place overall and a place on the podium for the first time.

It's now or never... This is Eddie Hall's year.

In order to qualify for the televised final of World's Strongest Man 2017, Eddie first had to get through the heats. His aim was to do well enough to get through without injuring himself or expending too much precious energy. This he achieved with relative ease by dragging a filled container, lifting a log and tossing pretend bars of gold high above his head.

The World's Strongest Man 2017 Final took place at the end of May in Botswana, so not only did Eddie have to contend with the events themselves, plus the extra pressure of taking part in TV interviews between the events, but also he had to contend with the long journey to the event arena prior to the competition and the hot weather at the venue. However, Eddie felt some confidence, as he was in good health and his third placing in the competition the previous year had shown him he was well able to compete on the global stage.

His confidence was dented slightly when he found himself in fifth place after the first event. However, the Tire Flip was his least favourite event and the massive tractor tyre that he had to flip over several times was bigger than the one he had used in training, so that helped to explain why he had not done as well as he had hoped. He knew there were better events to come, though, so he put that behind him and focused on the next task.

The second event was the 350kg Squat Lift. This involved the competitors shouldering a bar with weights on each end, and squatting down to press the weights against padded buffers before standing upright again - they needed to do this as many times as possible within 60 seconds. Eddie's stocky build made him well suited to this event - he is 6ft 3in in height, but looked short in comparison with many of the other contenders who were around the 6ft 8in mark. He won the event with a comfortable lead of 15 successful squats.

His win in the second event put him in a great position for the third event, the Viking Press. The Viking Press is a container filled with heavy sacks, which competitors have to tilt by lifting the container's handles from shoulder height to above their heads. Eddie got to go last, so he watched his competitors carefully. When it was his turn, he lifted the container 15 times to put himself into the lead with relatively little effort.

Eddie's gameplan could have been disrupted when the man he beat in the Viking Press, Hafþór 'Thor' Björnsson5, decided to appeal the result. Thor had been judged to have completed 14 repetitions in 60 seconds as his 15th rep had been disqualified for 'double-dipping' - using the force of his legs twice to help him to push the handles above his head, rather than sticking with the permitted single bend of the knees. Eddie would have had to share the first place points with Thor if the appeal was successful, but all the referees agreed that the rep had failed so Eddie moved to just half a point behind the USA's Brian Shaw (World's Strongest Man 2016) who was in first place overall.

The fourth event took place early in the morning of the next day. This was the Plane Pull, in which each man in turn had to pull an aeroplane several metres along a runway. As Eddie had won the previous event, he got to go last again, so he watched a relatively light man do better than expected by adopting a posture low to the ground, and he watched a relatively heavy man do worse than expected - Brian Shaw stood quite upright causing the rope attached to the plane to wobble around and waste energy. Eddie kept his posture low and pulled as well as he could, putting him in third place for that event, but first place overall.

The fifth event was Eddie's favourite - the Deadlift. As the world record holder in this event, Eddie made the early weights look easy, even though he was not 100% fresh after having completed the previous events. Thor decided to go for 460kg (more than 1,000lb) and completed the lift successfully after a bit of a struggle, then Eddie stepped up quickly and lifted the bar again. Thor then asked for an attempt at a heavier weight, so 472.5kg was loaded on to the bar. Thor took the bar and was able to lift it from the ground, but he was not able to lock his knees into position to complete the task. Eddie stepped up again, braced himself, and completed the lift successfully to cement his position at the top of the leaderboard.

The sixth and final event was the Atlas Stones. Although the task is seemingly simple, Eddie was well aware that things can go wrong if the stones slip as they are lifted, or are not placed securely on the barrels, so he knew he had to be careful. His turn was last again, thanks to his win in the Deadlift. He knew he was four points clear at the top of the leader board, and he knew how well his competitors had done, so he suspected four stones would be enough to secure his win but he wasn't quite sure. He covered his hands and arms in tacky glue and lifted the first four stones quickly and cleanly, then asked if he had won. Nobody could confirm his win right then so, with five seconds remaining, he lifted the fifth stone into position just in case6.

Thus Eddie 'The Beast' Hall from the UK became the World's Strongest Man 2017.

Literally on top of the world.

When the win had been confirmed, Eddie ripped his t-shirt from his chest and roared with delight. In the TV interview that followed, he revealed that he had promised his dying dad that he would be the World's Strongest Man one day, and he had done it at last. With tears in his eyes, he shouted, 'I love you, Dad!' and then announced he would be retiring from world strongman competitions as he wanted to spend more time with his family.

Having achieved his dream, Eddie resolved to celebrate his win and find new ways to enjoy himself, as he no longer had to take part in a gruelling training regime 365 days a year. He also planned to use his new-found fame to earn money to support his family, as he couldn't imagine himself working 9-5.

In 2017 he was interviewed for the World's Strongest Man: The Winner's Story TV programme, and also appeared on radio and TV to promote his autobiography Strongman that was published in October 2017. He participated in the Giants Live strongman stage show and had great fun battling against the boxer Anthony Joshua in a 'manathon' involving physically undemanding games such as Jenga and Connect 47. He finished the year by eating three Christmas dinners and enjoying family time at home.

1Quotes are by Eddie Hall and are taken from the TV programme World's Strongest Man: The Winner's Story.2In 2017 Alex opened her own barbershop.3The Deadlift requires competitors to lift a bar with weights on either end from the floor to above the knee, and then lower it to the floor again.4Since then his business affairs have been managed by Mo Chaudry, who is also the owner of Waterworld in Staffordshire.5Thor plays Sir Gregor Clegane aka 'The Mountain' in the TV series Game of Thrones (2011+).6After the event, it was revealed that he had won on points after lifting the fourth stone, but it made an impressive finale to see him complete the task with milliseconds to spare.7As 2017 was his year, Eddie won that as well.