Noughts-and-Crosses aka Tic-Tac-Toe Content from the guide to life, the universe and everything 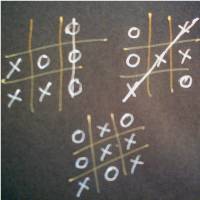 Noughts-and-Crosses is one of the first board games that many children learn.  Although it is useful for teaching the rudiments of strategy and logical thinking to young kids (and for keeping children amused on long journeys), the simplicity of the game means that few older children, adolescents, or adults play it.  As long as both players pay attention and refrain from making foolish mistakes, a draw is guaranteed every time.

In the UK, this game is commonly known as Noughts-and-Crosses; in the US, it is called Tic-Tac-Toe.

To play, all you need is a writing implement, a suitable writing surface, and two people. Examples of suitable devices include pencil and paper, stick and sand, and finger and foggy window. Alternately, instead of writing on the surface, you could place objects on it as markers.

Constructing the Playing Board

The board is constructed of four lines, making a 3x3 matrix of squares.  It looks something like the '#' symbol.

Each player chooses the symbol he or she would like to use, either an 'x' or an 'o' (these are also called 'crosses' and 'noughts', respectively).  The players take turns writing their symbols in the squares.  When one player has three of his or her symbols in a line (whether vertical, horizontal, or diagonal), that player wins.  If all the squares are filled without either player winning, the game is a draw (also called a 'cat's game').

Noughts-and-Crosses is simple enough that you'll have more fun working out the strategy on your own.

There are several common variations on Noughts-and-Crosses. Many involve increasing both the size of the board and the number of aligned symbols necessary to win, and some place restrictions on moves that can be made.

Noughts-and-Crosses can be played on cubical, or higher dimensional boards. Although using the proper strategies can have the same results as in regular Noughts-and-Crosses (forcing a draw), it is very difficult for human players to plan such strategies, making these variations much more challenging and interesting. Common rule changes include forbidding play in the centre square except as defence, and adding players (as long as the number of players does not exceed the number of dimensions of the board).

Blindfold Noughts-and-Crosses is a variation in which the board is not drawn, and play is verbal. The players must remember where each move is made, which can be tricky, especially on a board with more than two dimensions!

Connect Four is a commercially available game which uses a vertical board. The pieces slot in the top and fall down to the lowest empty cell in a column, so the player is severely restricted in where he or she can place a piece. The board has six rows and seven columns, and the first player with four in a row wins.

Go-moku and Renju are oriental games descended from Wei Chi, also called Go. In both Go-moku and Renju, the goal is to get five in a row (vertical, horizontal or diagonal) on a 15x15 board. Renju forbids certain moves by the first player in order to offset the distinct advantage (a sure win for the first player in higher level Go-moku play). Pente (registered by Parker Brothers) is a commercial version of Go-moku popular in the USA.

Historically thought of as a harmless, somewhat fatuous game, Noughts-and-Crosses' crowning glory probably came in the 1983 film War Games when it was used to demonstrate the futility of nuclear war. In the film, Matthew Broderick plays a teenager who manages to hack into a super-computer owned by the US government. Choosing to play 'Global Thermonuclear War,' he sets in motion a chain of events that will lead to the computer launching the USA's arsenal of nuclear weapons. In trying to find a way to stop the launch procedures, Broderick initially starts playing the computer at Tic-Tac-Toe and then sets it to play itself. With each game ending in a draw, he hopes to show the computer by analogy that a nuclear war cannot be won because the resulting nuclear devastation would result in both sides losing. Eventually, with only seconds left, the computer realises this and the launches are aborted.