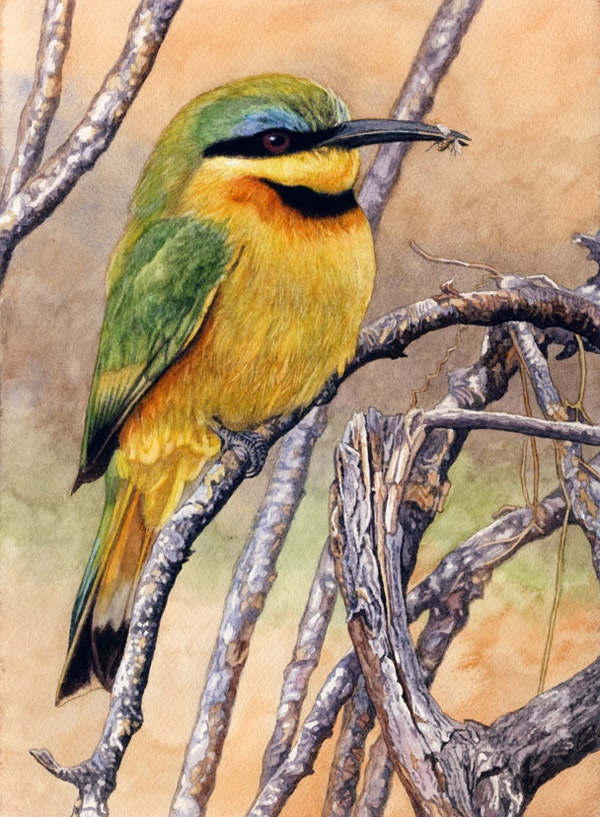 Today I bring you something very special and dear to my heart – a Little Bee-Eater, Merops pusillus. The genus name, Merops, in which most other bee-eaters are also placed, commemorates a Greek hero who was changed into a bird, while the species name ‘pusillus’ means ‘small’. It is indeed one of the smallest of the bee-eaters, reaching about 18 cm/7" in total length. But it is typical for the bee-eater family in being very pretty!

This little bee-eater is not rare, occurring all over sub-Saharan Africa except for the rainforest belt and the driest deserts. In South Africa they're mostly absent from the colder, drier southern regions, favouring in the hot, open savannah of the north. Still, I don't see it much, and it's always a pleasure to encounter it. They are somewhat less conspicuous than the larger bee-eaters. They're also not very loud, making soft, high-pitched whistling sounds. They also occur solitarily or in pairs, most of the time. Other local bee-eaters occur in small to large flocks, and are quite vocal, their mellow to harsh calls announcing them as they fly around. Little bee-eaters spend most of their time on perches, from where they spy out the environment, launching themselves at intended prey items every now and then. They hunt bees, as their name indicates, but also a variety of other insects. Mine has caught a fly! They also eat small beetles and aphids.


All insects have external skeletons, these sometimes being especially hard and thick as in the beetles. Bee-eaters often don't digest these hard parts, but regurgitate them as small pellets which fall and collect beneath their perches. These offer direct evidence of what the bee-eater has been feeding on! They appear to be able to eat other insects than wasps and bees that also possess a degree of noxiousness, like blister beetles, or butterflies (many of the more brightly-coloured ones being highly distasteful). Bee-eaters are only interested in flying insects. They will totally ignore one on the ground or on a bush – until the moment it takes flight! Then it will swoop towards it and try to catch it.


Spotting a little bee or fly several dozens of metres/yards away demands excellent eyesight. Bee-eaters must indeed possess extremely acute vision; they can fix on a little insect in mid-flight – and insects can fly quite fast, to the human eye being just a faint blur – and then keep it in sight until they can close the tips of their bill down upon it, the insect of course trying to escape as soon as it becomes aware of the predator! Some of the forest-living bee-eaters of Asia can spot small bees flying against the confusing backdrop of the forest canopy at a distance of 100m/yards! The bee-eater will set a course aiming for slightly below the position of its quarry; then, when right beneath it, will reach up and grab the insect in its bill. Grasping the insect with the tip of the long, curved bill, its sting is out of reach of the bird's face. It beats a stinging insect head-first against the perch to kill it, then works it around in its bill so that it can beat or rub the sting against the perch, to expel the venom and often to detach the sting itself. It also will expel the bowel contents, this making some of the yuckier insects slightly more tasty. Finally it swallows the insect whole.


Little bee-eaters usually perch fairly low, in spots not as conspicuous as for instance those favoured by rollers. They're alert little birds. They need to keep watch not only for prey, but also for larger birds intending to make prey of them! These little birds keep small territories, and stick to favoured perches in these territories, sallying forth to grasp their catch and returning to the perch to feed. They are excellent fliers, not so much fast as highly manoeuvrable, using their long wings and tails for rapid changes of direction. Bee-eaters all have small and weak feet; these are suited mainly to perching, and bee-eaters are very rarely seen on the ground.

Like their relatives the rollers and the kingfishers, bee-eaters nest in holes. These they often excavate themselves, not in trees, but in earth banks, such as riverbanks or sloping land, even the sides of ditches or ploughed furrows. They sometimes dig down into level land, and sometimes excavate their nest tunnels in the roofs of aardvark holes. They start digging by pecking at the earth with their curved bills. Once they've excavated a big enough hollow, they will climb into it, and use their little feet to scoop up more earth and shove it backwards and out of the holes. They dig the burrow to a length of 50 to 70 cm/20" to 28", and excavate an oval nesting chamber at the end. They lay 4 to 6 eggs per clutch. The newly hatched bee-eaters are naked and helpless. Sometimes another kind of bird, a honeyguide, will parasitize their nests, the baby honeyguide killing the bee-eater chicks and then being raised alone by the bee-eater parents. Most clutches are not parasitized, and bee-eaters tend to have remarkable breeding success, raising most of their chicks to the point of fledging.


Although little bee-eaters have fixed territories, they don't always occupy the same ones. They appear to move around in response to environmental factors, though we don't quite know yet exactly how. They aren't migrants as their relatives the Eurasian Bee-Eaters are, but may respond to rainfall, moving from drier to moister regions where there will be more insects available. So, in some places in some years they will be abundant, in other years scarce. Overall, they are not endangered, having a very wide range and being able to survive in a variety of habitats.


Bee-Eaters and their Relatives

I hope to feature more bee-eater species in this column. All of them are exquisitely beautiful birds. They are related, as I've mentioned, to kingfishers, to rollers and to todies, and a bit more distantly to hornbills and hoopoes. A group of relatives that are very similar to them are the Motmots of the tropical Americas, which I hope to feature here some time. Bee-eaters seem to have originated in the tropical forests of Asia, where three unusual forest-living species still occur. From there they spread into open regions, reaching Australia, Europe and Africa, where they are today most diverse. A few forest-living bee-eaters are found in Africa as well, but the majority are specialized for hunting in open regions such as savannah or grassland. Numerous bee-eater species congregate in large flocks, breed socially, and migrate, sometimes over long distances. Some of the larger bee-eater species are especially attracted to periodic mass congregations of insects, such as locust swarms or insects fleeing before bush fires. Some follow or even ride on large foraging mammals (or birds), swooping forth to catch insects disturbed by them. A few bee-eaters even occasionally catch small fish! All in all, they are remarkable, fascinating and beautiful birds.