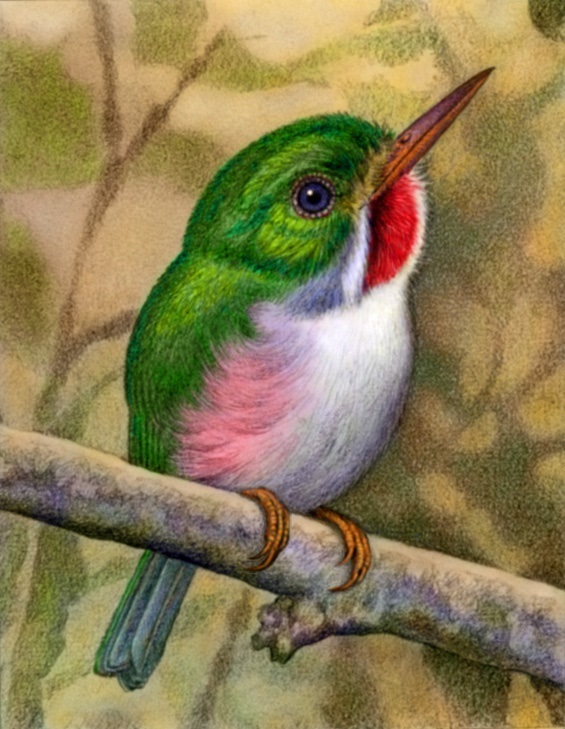 Today I feature a pretty little birdie! This is a Cuban Tody, Todus multicolor. The scientific name just means 'multicoloured toddy'. Todies are tiny, very pretty birds that are related to kingfishers, rollers, bee eaters and the Motmots of the tropical new world. Todies don't occur in South Africa but I decided to feature one, since I absolutely need to get to the amazing bird diversity of the neotropics. Todies are interesting for being a group of very distinctive birds that only occur on the islands of the West Indies, to be precise the islands called the Greater Antilles. The Cuban Tody, as you might be able to work out, occurs on the island of Cuba, and small adjacent islands. There are four other species: the Jamaican Tody (occurring on Jamaica, who would have known?), the Puerto Rican Tody (from guess where?) and then the Narrow-billed and Broad-billed Todies, both occurring on the island of Hispaniola (that is to say the island shared between Haiti and the Dominican Republic). Those two tody species also partition the island between them, living in different habitats and feeding in different ways. The five todies comprise a single bird family, the Todidae. Since they are all so similar, I will use the Cuban tody as a representative, and speak about the entire family here.


Tiny Fly-catchers of the Forest

Todies are all very much alike, being from 4" to 4.5" (about 10-11.5 cm) in total length, a mere 5-7 g in weight, all being bright, glossy green above with lighter underparts and a brilliant red patch on their throats. They are very round in overall appearance, with short wings and tail, and comparatively large heads. They have fairly long bills that are flat and broad. The edges of their beaks have fine serrations. They use these bills to catch flies and other invertebrates, and will on occasion also catch tiny geckoes. They are not at all closely related to the birds called flycatchers proper. Those are Passerines or Songbirds, while todies are not songbirds but near-songbirds. The group the todies belong to, the Coraciiforms, was very much more diverse a few dozens of millions of years ago, and the dominant kind of bird you might have met up with in the steamy forests back then, but the songbirds evolved faster and greatly surpass them in diversity today. Todies themselves are known as fossils from over 30 million years ago, the genus Palaeotodus having been found in France and Germany. Their current occurrence on those few Caribbean islands is therefore a tiny relic of what their distribution was in ages past.


The hunting strategy of the tody is to sit still on a small twig and scan its surroundings. Its greenish back can make it quite inconspicuous against the forest foliage. Todies have a characteristic resting posture with their bills pointing upwards at an angle of 45° or so. They usually watch the bottoms of leaves above their heads. Many little insects creep about the bottoms of leaves, this making them inconspicuous to many other potential predators, but not to todies! If a tody spots one, it flies upwards and grabs the insect in its bill, making an audible snapping sound, the fine serrations maintaining its grasp. Sometimes todies catch prey on the ground, swooping down to grab it. Mostly their flights are short. Todies, with their short, broad wings, are not good distance fliers. Their legs and feet are tiny, and on the rare occasion they're on the ground, they move with short hops. They occur singly or in mated pairs in the forest, and will stake out and defend small territories. They sometimes join other bird species in mixed foraging flocks. They use calls to proclaim their territories, and also produce a whirring, rattling sound with their wings during their short display flights. Todies can apparently control this, making the whirring sounds when they want to, not always when they fly. This is an example of birds deliberately using their feathers to make sounds, which is rare among birds but is found in a number of distantly related groups; in South Africa an example is the little cisticolas called 'Klop-kloppies' in Afrikaans, which make weird knocking, tapping sounds with their wing feathers.


Like their relatives, todies nest in holes at the ends of tunnels. They usually excavate these themselves in earth banks. Because they are so small, they need only minimally elevated soil banks, even having been recorded making their tunnels in the sides of deep car wheel ruts! The tunnels are only about 3 cm/a bit over an inch wide, and run horizontally for up to 60 cm/2", at the end of which is the nesting chamber, 3"-5"/7.5 cm-12.5 cm long and about 3"/7.5 cm high. They lay two to four eggs. These are white but soon become stained with soil. Both parents care for the young. They've been recorded bringing food to the chicks up to 140 times in a single day, the highest feeding rate so far seen in any kind of bird!


Being so small, todies are usually inconspicuous, but are not particularly shy and will sometimes allow themselves to be approached quite closely. They're exquisite little birds to see. You can find them in the forest by listening for their calls. The Cuban tody has a distinctive, soft, 'prreee-prreee-prreee' call, from which it got the common Cuban name 'Pedorrera'. The other todies have distinctive calls of their own. The Cuban tody has other calls as well, such as a 'tot-tot-tot' call given while perching. Todies are quite vocal, but their calls are rather simple chatters, buzzes, beeps and rattles. Their colourful throat feathers puff out with each note.


The Cuban tody is, today, at least still quite common on the island, and not under any threat of extinction.