Colours of Wildlife: The Greyheaded Kingfisher – A Misnamed Feathered Jewel 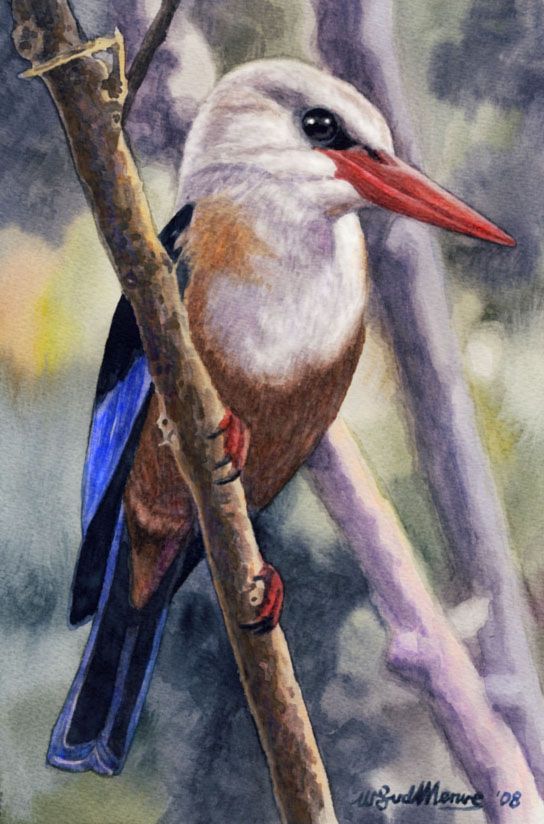 Today's picture is of a Greyheaded Kingfisher, Halcyon leucocephala. This bird species is inappropriately named in English on two different levels. First, by being named for its grey head, which is the dullest and least distinctive part of it. The rest of its body is very colourful: bright red bill and feet, rich rufous underparts, and deep blue wings and tail. Its pale grey head and velvet black back merely set these bright colours off. To make matters worse, the scientific name means 'WHITE-headed Halcyon' (Halcyon being derived from the mythological Alkyone, daughter of the wind-God Aeolus, who was changed into a kingfisher) although only the race on the Cape Verde islands (a tiny part of the total range) actually have white heads.

Secondly, though called a Kingfisher, it rarely catches fish. Its food consists mostly of invertebrates like grasshoppers, locusts, crickets, cockroaches, praying mantises, ants, beetles, and even spiders and scorpions, caught far away from water. Sometimes it will even catch mice, frogs, lizards, baby birds – and fish. But again the fish are just a minor side item on its menu.

Having gotten beyond the name: these are beautifully coloured little birds of Africa, flying gems that live in the dry savannahs and woodlands and are predators of a variety of little creatures.

Greyheaded Kingfishers occur all over sub-Saharan Africa, except in wet forests, very dry deserts, treeless grasslands, or mountainous regions – and also not in the very far South. In South Africa it is rather rare, only occurring in the warmer far northeastern regions, and I haven't seen a living one yet. The species also ranges to Arabia and is found in the Cape Verde Islands – the white-headed ones mentioned above. Over its African range it moves around a lot, in the wetter parts being a visitor during the dry season, and in the drier parts visiting during the wet season – so avoiding either extremes of wetness or drought. All over, its habitat has to be lush enough to support lots of insects but open enough that it can watch and see what's happening on the ground from a high perch – of which there need to be sufficient, conveniently sited ones.

Sitting on its perch most of the time with its back hunched and its head forward, it will scan the ground methodically, bobbing its head every now and then. When it spots something it will rapidly jerk its head up and down a few times – perhaps to help it gauge the distance – and then swoop down to try and catch it in its long bill. If successful it will return to the perch and beat its prey to death against it before swallowing it. It will catch small fish in shallow pools by swooping over the water rather than diving into it like the true kingfishers do. It will also very occasionally catch a flying insect in the air, but most of its prey is caught on the ground.

So is this a kingfisher or not? It does look similar in shape to the kingfisher that is well known in Europe. For a long time it, along with all other birds called kingfishers, was classified in the same family, even despite different feeding behaviours. All of them have short legs, bodies and tails, large heads, and particularly large or long, straight bills – except for a few deviations, such as the stout bills of the Kookaburras with somewhat hooked tips, even more pronounced in the Hook-billed Kingfisher, and the broad, short, stout bill of the Shovel-billed Kingfisher … but even these species are clearly related to the others. Almost all are perch-hunters, either sitting over water to dive down when a fish is spotted, or sitting on a perch in bush or woodland and catching prey on the ground. Again there are exceptions: the amazing Pied Kingfisher hovers over open water, sometimes miles away from the nearest land, diving down to catch fish; the Shovel-billed Kingfisher at the other extreme actually feeds sitting or shuffling along on the ground, ploughing through the soil with its broad bill, catching earthworms! The Hook-billed Kingfisher might also dig in the ground with its bill. It is also unusual in being largely nocturnal. But again it is clear that these birds, too, are kingfishers by relationship.

Or so it seemed until recently when relationships were investigated on the molecular level. It was then found that kingfishers actually constitute three different groups, that had already begun to separate from each other forty or fifty million years ago, or maybe even earlier! So, they should properly be classified as three different families, despite the similarities in form and the overlap in behaviour and feeding. First there are the Dacelonid kingfishers: this is today the most diverse assembly. Most are general feeders; a few are specialized to fish or hunt crabs and other aquatic or marine animals, but few dive into the water. The unusual Kookaburras, the Hook-billed Kingfisher, and the Shovel-billed Kingfisher, also belong to this family (it is actually named after the Kookaburras, genus Dacelo). Dacelonids are most diverse in the New Guinea region spreading to Australia, Southeast Asia and the Pacific islands, with many species in Africa and the warmer regions in Asia, but none in Europe or the Americas.

Then there are the Alcedinid kingfishers: these are the ones that are most typical, including the Eurasian or River Kingfisher, Alcedo atthis. Although many fish in the traditional diving-into-the-water manner, there are also many who don't, that mainly hunt insects and invertebrates in woodlands or forests. They are diverse in Asia and Africa, but with only two species in Australia, a single species in Europe, and they never reached the New World or the more isolated of the Pacific Islands.

Then lastly there are the Cerylid kingfishers, all of whom are specialized fishers, including the Pied Kingfisher, Ceryle rudis, which is the most highly adapted fisher of all. This family is probably the newest, with the fewest members, found mainly in the Americas but also in sub-Saharan Africa and parts of Asia. This is also the family that has best adapted to cold regions, with the Crested Kingfisher, Megaceryle lugubris, inhabiting the high mountains of Asia and Japan, and the Belted Kingfisher, Megaceryle torquata, occurring into Alaska and Canada.

And yet, all kingfishers are related to each other, the relationship just being rather more distant than was believed before. The Greyheaded Kingfisher belongs to the Dacelonidae, the most diverse group. It is probable that this family is the 'core' from which the Alcedinidae and the Cerylidae later separated. The perch hunting of invertebrates is perhaps the 'primitive' feeding strategy of all kingfishers, from where many subsequently developed the ability to fish, with the Alcedinidae and the Cerylidae specializing more particularly in this strategy. The genus Halcyon, to which the Greyheaded Kingfisher belongs, is the largest genus of kingfishers in the world – sometimes split into many separate genera – which in Africa includes several other species called Woodland Kingfishers, of which the Greyheaded is quite representative. It is average in size, being between eight and nine inches in total length, and its habits are also typical, except for it being the most migratory of the African Woodland Kingfishers. And it is one of the most colourful as well.

Another interesting aspect is that Greyheaded Kingfishers can be quite social. Close relatives often remain close to each other and on migration they might form small flocks. They will also roost together, up to 24 having been found in a single tree. But it hunts and breeds singly or in pairs.

Like pretty much all kingfishers, this one nests in excavated holes. Using its bill, it will dig tunnels in riverbanks, the walls of erosion gullies, or large, earthen termite nests – these being ubiquitous in grassland and savannah regions in Africa. (Even inhabited termite nests are used – the workers simply sealing off the interior walls of the tunnels without bothering the birds.) It may sometimes use the large subterranean excavations of Aardvarks [link!], digging its nest tunnel in the walls. They defend their nesting areas, having territories that are larger in poorer habitats, smaller where the feeding grounds are rich. Males and females display to each other, first with a circling flight, giving their trilling call, then descending to a perch where they sing and fan their wings open, displaying the bold underwing pattern of black, white and rufous, while dancing by swaying from side to side and vibrating their wings.

The nest tunnels are straight and up to a meter long. No nesting materials are used. Two to six eggs are laid, and the male brings food for the female while she broods. Incubation is probably around two weeks. Greater Honeyguides, Indicator indicator, sometimes lay their eggs in these nests, their offspring biting the kingfisher chicks to death to be raised by their unwitting parents in their place. This is called brood parasitism. When the nest hasn't been parasitized though, the kingfisher chicks will be fed by both parents, and fledge in probably about three weeks. Like all kingfisher nests, the nest becomes rather filthy and smelly towards the end, since the parents do not remove any of the leftover scraps or the chicks' wastes.

Despite this kingfisher being fairly common and widespread, there is still much we don't know about it. That is why I use the words 'probably' in the above paragraph: science still doesn't know exactly how long the incubation and fledging periods are. Also we still don't quite understand all the aspects of its migratory movements. As I've said this is one of the rarer species in South Africa and it hasn't been photographed as often as some of the other species. Individuals in Africa are rather wary, but apparently the ones in the Cape Verde islands, where there are no natural mammalian predators, can be very tame.