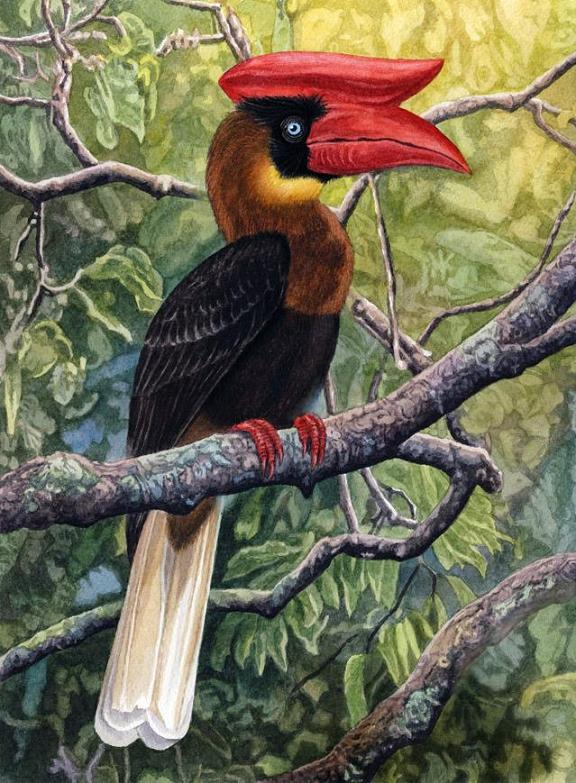 Yet another hornbill! I want to feature every last one of them in this column! Here you have one of the most spectacular species, the Rufous Hornbill, also known as the Philippine (or Great Philippine) Hornbill, Buceros hydrocorax. To be exact, the one I illustrate here is the subspecies from the island of Luzon, which has an all-red bill. The subspecies from Mindanao has a bill with a yellow tip, while the subspecies from Samar also has a yellow-tipped bill, but a reduced casque, which does not protrude forward into a sharp point.


In this hornbill species, the female looks much like the male except for having a slightly smaller casque. The juvenile is very different-looking, though, having a whitish grey body and a blackish bill and casque. It looks like a completely different species!


One of the Rarest

This hornbill is rare, and I could not find many reference photos of it. The Philippine Islands have suffered massive habitat destruction. Once they were covered almost completely by tall, lush rainforests. Today some islands have been completely deforested and the remaining forests are in small patches. Many if not most of the wildlife of the islands are threatened with extinction. A great many species are endemic to these islands– they occur nowhere else. Even worse, many species occur on only one or two or a few of the Philippine Islands and, as in the case of this hornbill, the populations on different islands may differ subtly, making them into different subspecies. Overall, in spite of the destruction there is an amazing diversity of plants and animals on the Philippines. Indeed, new species are still being discovered.


The rufous hornbill occurs in Luzon, Mindanao, Samar and a few other islands. It lives in tall lowland evergreen forest dominated by trees of the dipterocarp ('two-winged fruit') family. It can also be found in secondary forest (forest regenerating after having been logged) and mangrove forests (forest along the seaside and around the mouths of rivers, adapted to grow in salty water). In a few places, such as the Sierra Madre of Luzon, it is still common and easily seen.


Apart from suffering from its habitat being destroyed, this hornbill is also sometimes hunted. Traditionally, some peoples use the skulls of these hornbills in ceremonial head-dresses.


Living rufous hornbills are spectacular. They are very large birds, reaching 65 cm/26" in overall length, and a weight of 1.8 kg/4 lbs. Like many other hornbills, their huge bills and casques seem too big for their bodies, but the internal hollow, honeycomb-like structure of the casque means that it is much lighter than it looks.


Clock of the Mountains

The large casque, as in many other hornbill species, might play a role in amplifying or modifying the sound of the bird's calls. The main call is a resonant honking, with the female's at a higher pitch than the male's. They also have barking and squawking calls. Groups of hornbills roost together, and then in the morning before setting out to feed, they call together. They also call together in the evening when they return to their roosts. These calls can be heard 1.5 km/about a mile away. They call always at the same times, so precisely that they are called the 'clocks of the mountains'. They also call on the wing when moving from one tree to another, or from one hillside to another.

Like other Asian hornbills, they are primarily fruit eaters, fond of figs. They especially like fruits that are very sweet and/or red in colour. They also take seeds and insects. Sometimes they will come down to the ground, taking grubs, ground-living insects and centipedes. They are also surprisingly agile fliers and sometimes catch insects in the air. Captive birds offered animal foods become very excited, acting like juveniles begging for food.


This hornbill's breeding behaviour is not well known, but it is probably like most of the other hornbills that incarcerate the females in tree holes, with the male bringing her and her chicks food. In the rufous hornbill, the nest can be very high up in the tree, 30 m/100' or more from the ground. They have been noted to use their big bills like chisels to excavate and enlarge the tree holes, and have also been observed in holes where the entrance was not sealed up as in other hornbills. They've also been noted to have helpers, probably chicks from previous seasons, helping the male feed the female and chicks in the nest. The helpers, together with the male, also bring the dominant female food as a form of courtship-feeding before the breeding actually starts. Overall therefore it would seem that this might be a species to watch for interesting unusualness!