Colours of Wildlife: The European Roller 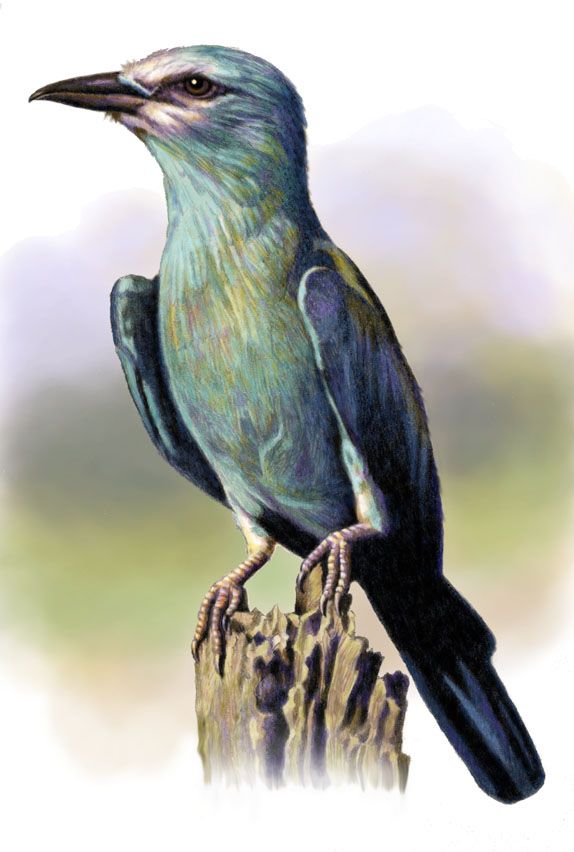 This picture started as a pencil sketch; I then scanned it in and added colour with a graphics program. It depicts a European Roller, Coracias garrulus. Just as with the Grey-headed Kingfisher, this bird has a somewhat inappropriate name, this time because it doesn't just occur in Europe. It breeds in southern and eastern Europe, but also in western and central Asian countries from Turkey to Kazakhstan. In the northern Winter months, it comes to Africa and is a common sight here in South Africa in our Summer.

Rollers are actually relatives of Kingfishers, having a similar build – large head, short legs – as well as a similar lifestyle to the generalist Kingfishers, being perch hunters. Rollers are generally larger and more robust, with stout bills with sharp, hooked tips. They are not as diverse as kingfishers, constituting only two genera, Coracias and Eurystomus, and only about twelve species. Coracias is the largest genus, with nine species, most of which occur in Africa.

Rollers get their name from their tumbling, cartwheeling and rolling territorial display flights. The European Roller is typical in this, first climbing almost vertically, then diving while flapping its wings to gather more speed, and finally leveling out while rocking and rolling its body from side to side. It calls at the same time, having a very harsh, raucous voice. My guide states it as sounding like 'rairairrairrairr …' or a football rattle. In Africa it is largely silent.

This roller is a bit over 12" in length (31-32 cm) and stoutly built. Like all rollers, it has beautiful, mostly bluish plumage: a bright cyan on the head and belly, with deeper blues on the wings, tail and rump. Its back is brownish, while the bill and eyes are black. In several European languages its name translates as 'Blue Crow'. Its Afrikaans name, 'Troupand' means, roughly, a pledge to symbolize faithfulness, i.e. a wedding ring.

In their breeding areas, European Rollers prefer warm, sunny and open habitats – again, as with the Greyhooded Kingfisher, the main requirements being perches and a clear view of the ground. They enjoy open oak forests or clearings in pine woods. In Africa they occur in bush and savannah regions, also including clearings in mountain forests, only avoiding the driest deserts and the lowland rainforest belt. Like other rollers they have adapted well to man-made habitats such as farms and orchards, and also make use of fences and telephone poles for perches, this enabling them to exist in otherwise open grassland. This makes them some of the most easily spotted birds, whether in game reserves or on car trips through the countryside. They are abundant in some parts of Africa: in the Sudan, on one trip of 50 km, 500 were counted sitting on roadside wires. But for some reason they are rare in West Africa. Their numbers also seem to be declining in parts of Europe and Asia. Nevertheless, the total population must number in the millions, and so this is at least one bird species that is fairly secure.

This species migrates on a rather spectacular scale – though it is by no means a record holder. The typical flight from Eastern Europe or Asia to the African feeding grounds is around 10 000 km, and this is completed at a rate of about 67 km per day. Then, in April, they start returning. Most of them are channeled along the coast of East Africa, and in some places in Tanzania, Kenya and Somalia, hundreds of thousands can be seen passing a single point within a few hours. They fly at an altitude of about 300 to 500 m and in a column several kilometers in width. From the 'horn' of Africa in Somalia, they cross the sea to the Arabian Penninsula, crossing the desert in Oman, and from there to their northern breeding grounds. I think there might still be more we could learn from their migration patterns if we should carry out more detailed studies; I've been checking out the site tracking the migration of Eurasian Cuckoos from Britain to Africa, and it surprised me greatly how far and how fast those cuckoos went, what routes they chose, what halfway stops they took (or didn't take) and where they ended up.

Like the generalist kingfishers, rollers are predatory birds, catching insects and invertebrates, as well as vertebrates like frogs, lizards, snakes, small mammals and birds. When not migrating they occur spaced out, singly or in pairs, favouring one or a few perches. They sit and scan the ground, swooping down when a prey item is spotted. Smaller animals will be swallowed straight away; larger ones will be taken to the perch and beaten to death against it before being eaten. They will regurgitate the indigestible bits as a brownish pellet; like owl pellets these can often be seen around their perching sites. In Africa they make especial use of the vast eruptions of fertile, male and female, flying termites (alates) that occur in the rainy season, as well as locust swarms. They are also attracted to bush fires, from which many insects and other small animals are forced to flee. In the aftermath of such fires there will even be some nicely barbecued tidbits lying in the ash.

In its northern range, the European Roller nests in holes in trees – either natural or excavated by larger woodpeckers such as the Black Woodpecker – about 5 to 10 m from the ground. Sometimes a pair will excavate a cavity in a sandy riverbank, like kingfishers do. The nests are left unlined. Two to six eggs are laid and the female does most of the incubation. The chicks fledge in 26-27 days. The juveniles are slightly duller versions of the parents.