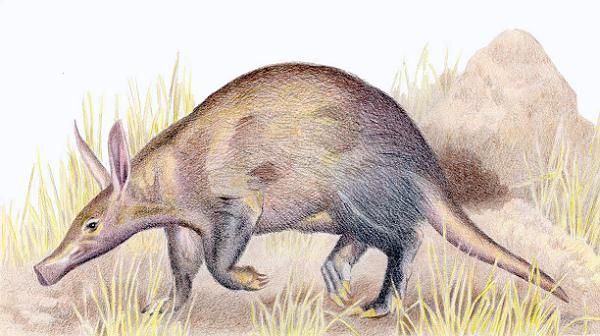 Today's article features the Aardvark, Orycteropus afer. The scientific name means 'digging foot from Africa'. This is a coloured pencil sketch. I've written an Entry on Aarvarks which you can find here. I will not repeat too much of what I'd written there, instead telling you some personal and interesting new stuff. For those of you who don't want to read the article: aardvarks are expert diggers and feed mostly on ants and termites (but read on!) and reach a length of over 2 m/7 ft with their tails included, and a weight of over 70 kg/150 lbs. They stay in their burrows during the day, coming out to feed at night.


I say in that article that aardvarks are relatives of ungulates like pigs. This idea has been overturned by recent genetic studies. Now it seems aardvarks belong to the Afrotheria, a lineage that includes Elephants, Hyraxes, Sengis, Sirenians, Golden Moles and Tenrecs. I hope to cover the latter three groups sometime. Within this group aardvarks are quite unique and only very distantly related to the others. They are in many ways very conservative in their build and genetics, which is perhaps why there is much similarity between them and the condylarths (ancient hoofed mammal precursors of the various modern kinds) that lived 50 million or so years ago.


Another very interesting thing about aardvarks that I've recently learned more about is that they eat fruit – just a single species of wild cucumber, Cucumis humifructus. This species is unique among the wild cucumber and gourd family for producing fruit that are underground – as much as 12 inches below the soil surface! They produce flowers above ground and are pollinated in the usual way, but then push the flowering stalk into the soil where the fruit develops. They are completely dependent on aardvarks for distributing the seeds. The fruit is protected by a thick skin which the aardvark breaks with its claws; then it will eat the succulent fruit. The seeds will be deposited in its dung, which fertilizes them as they germinate and grow. The aardvark in turn derives benefit from the cucumbers too, since they provide it with fluids and probably some vitamins and other nutrients also. The ranges of the two species therefore correspond. It is probably because the aardvark still eats this little bit of plant material that it hasn't lost its teeth entirely. 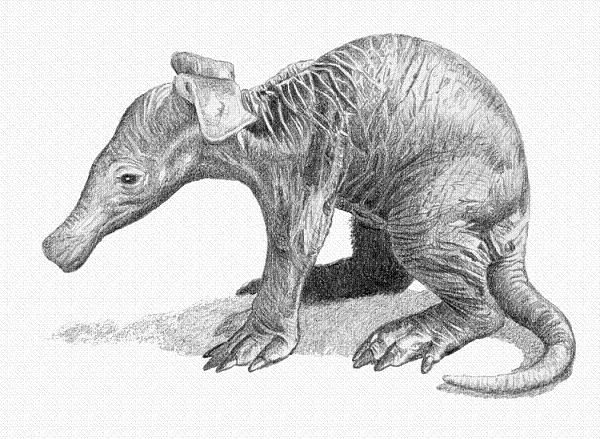 Here's a picture of an aardvark baby. These are born naked, wrinkly and very weird-looking! They weigh about 2 kg/4.5 lbs at birth. Aardvarks have been recorded as living as much as 24 years in captivity, but we don't know their average lifespan in the wild.


My father only hunted a few times in his life. He told me that he had once shot an aardvark, and that he always felt sorry afterwards that he had done it, it being such a strange and innocuous creature. Aardvarks aren't really hunted these days any more. I've heard of them, very rarely, being kept as pets … imagine going to visit someone and finding one of these in the house along with the cats and dogs! Some people will perhaps get the fright of their lives, having no idea what it is that they're looking at. 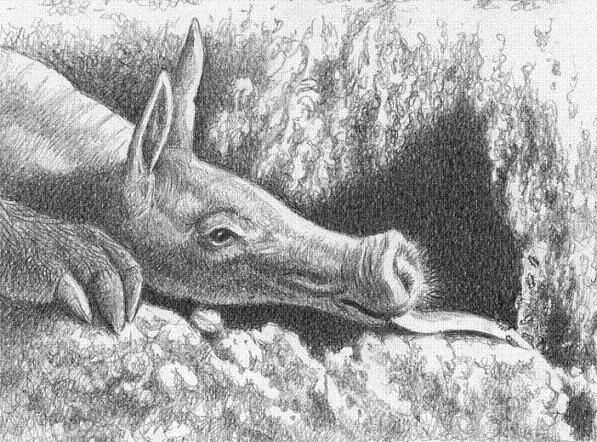 Here's a picture of an aardvark inside a termite nest, licking up the juicy little insects. Aardvarks will rarely eat other insects they encounter, like grasshoppers; there is a record of them having eaten mice, but I don't think that's a regular occurrence.


Editor's note: Aardvarks are so interesting, we're going to need two pages to do them justice. See the rest of Willem's aardvarks, and learn their story, on the next page.