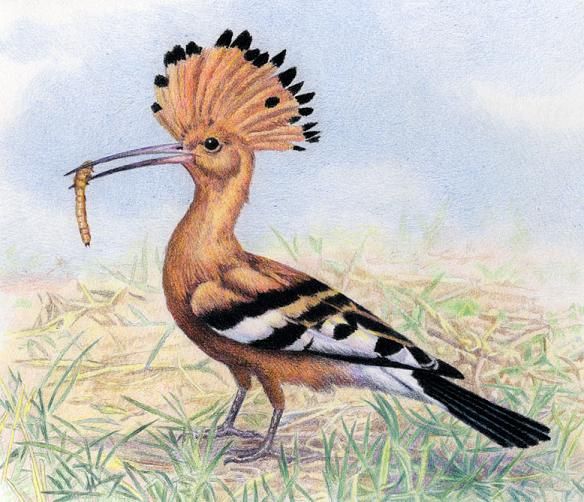 Here I have a Hoopoe for you! It has just caught a beetle grub. This is an African hoopoe. Sometimes it is considered a species in its own right, Upupa africana, sometimes it is only thought to be a subspecies of the Hoopoe proper, Upupa epops. In science, it is not really possible to make a clear distinction between a species and a subspecies. All that we can establish is that the African hoopoes differ from the Eurasian ones by not migrating and by being deeper reddish-brown in colour and having a slightly different black-and-white wing and tail pattern. Apart from that they're very similar. Another species, or subspecies, of hoopoe lives in Madagascar, and there used to be a 'giant' hoopoe on Saint Helena – though that one was not actually gigantic, only a bit larger than the surviving hoopoes. It went extinct fairly recently as a result of human activities, but we have no pictures of it, only some subfossil bones.

Hoopoes are instantly recognizable by their crown-like crests. When relaxed, they 'wear' their crests flat, pointing backward, but when they are excited, up the crest goes. The crest raising is a form of display by which birds signal each other and probably also predators. A hoopoe with raised crest looks alert and formidable, not an easily caught snack. The crest might also make it look bigger. The striking appearance of the hoopoe has made it one of the most easily recognizable birds where it occurs and it has been incorporated in myths and legends, and portrayed in the art of the Egyptians, Greeks, Chinese and many others. In Aristophanes' play 'The Birds' the hoopoe is the king of the birds – it does wear a crown after all! In medieval bestiaries it is praised for taking care of the elderly – the children of old hoopoes are said to pull out their old feathers, lick the 'mist' from their eyes and so rejuvenate them. (Needless to say this is not true!) The hoopoe is the national bird of Israel, state bird of Punjab, and a pair of hoopoes feature on the logo of the University of Johannesburg.

No less striking than its crown is its mellow hooting call, 'hoop-hoop-hoop' from which its common name and also its scientific name Upupa are derived. It also has other calls though, the most frequently heard being a sort of growl it gives as an alarm call or when it takes flight.


The bold black-and-white wing and tail pattern makes the hoopoe very conspicuous in flight, giving it a somewhat butterfly-like appearance. The wings are rounded and seem quite large compared to the hoopoe's body size. They fly with light, jerky wingbeats and although they look a bit slow they are expert fliers and can even evade falcons. The bold pattern is also evident in a pose the hoopoe sometimes adopt, spreading its wings and tail over the ground surface and tilting its head back. This was thought to be a defensive posture, making it seem bigger to a falcon or other bird getting ideas of trying to catch it, but is now considered to be a sun-bathing pose. Hoopoes also take water and dust baths to keep their fine plumage in shape.

Hoopoes forage by probing their bills into the soil. They have very strong muscles that help them open their bills even while sticking it deep into hard soil. The bills can sense the presence of yummy worms, grubs and mole crickets, which the hoopoe grabs and extracts. Hoopoes sometimes catch animals like small lizards, and may eat plant foods like berries and seeds, or even catch insects in flight. Their favourite areas for foraging are where the soil surface is open, not densely covered with vegetation. They therefore mostly live in areas of grassland, savannah and open woodland. The Madagascar hoopoe however is able to forage in the open understory of forest. Overall, hoopoes have adapted well to humans, being found in gardens, orchards and fields, where they play a helpful role in controlling insect pests. They are not persecuted except in a few places where they are shot for food. But suburban gardeners are usually delighted by their presence. In Britain, where it rarely occurs, it is said to favour the gardens of vicars!


While needing fairly open land for foraging, hoopoes are also dependent on nesting sites, most typically trees with holes in them. Although hoopoes look somewhat like woodpeckers – and are sometimes confused with them – they cannot excavate their own nesting holes. They can use their bills for flaking off pieces of bark in search of insects, but not for digging or hammering into hard wood. They therefore either need natural tree holes, or holes previously excavated by woodpeckers or barbets. Sometimes they use holes in steep earth banks, or the walls of buildings. They may line their nest holes with a thin scattering of grass, leaves and other scraps, or leave them unlined. In these they lay four to twelve eggs, sometimes even more. Their clutches are smallest in the tropics and largest in temperate areas. This may be because hoopoe chicks of northern Asia and Europe need to make the long migratory flight to warmer climes at the end of the summer, and not many of them survive. So, more chicks means more chances.


Hoopoe nests are notorious for their foul stench. Some of this is due to the accumulating wastes of the chicks, which the parents don't remove, to the point where the chicks' down becomes smeared and caked with it. If this isn't bad enough, the chicks also have glands producing a noxious substance making them stink worse. The incubating mother also produces this secretion, and rubs it all over her chicks. This is most probably a defense of the chicks against predators. Only a very hungry predator, or one with a very strong stomach, would still be interested after investigating a tree hole and being confronted with such a smell. To top it, the chicks will squirt streams of poop at any predator still bold enough to try something with them. They will also hiss like snakes and defend themselves with their bills and wings.


Hoopoes always remind me of my friend zendevil. She always asked me to say hello to the hoopoes whenever I saw them! I am fortunate in that I see them a lot – they are common in my garden and all over the city of Polokwane, not to mention the rest of South Africa. Globally they are widespread and numerous and consequently not threatened.