Our reporter was on the spot at the hottest event in the UK last week. 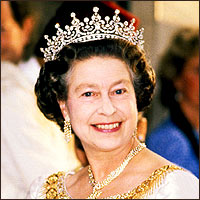 Unable to be in London itself on 4 June, the next best thing was to claim a comfy seat and total control of the TV remote. First up was Robbie Williams, 'Let Me Entertain You' accompanied by the Guards Drummers and Trumpeters. Talk about a rousing start! Comedian Rob Brydon introduced Will.i.am who did a Tigger impersonation while singing 'Tonight's Gonna Be A Good Night'. He was joined by Jessie J, who later performed 'Domino' alone. After JLS wowed the crowd with 'Everybody In Love', the audience were introduced to the concert organiser Gary Barlow, who said he would be joined by a surprise guest for special duet... it's not possible to rate the disappointment factor when Cheryl sashayed on in an extremely tight dress to join him and the pair screeched out 'Need You Now'.


This was followed by Lee Mack introducing Sir Cliff, resplendent in a pink suit and sparkly tie. He'd been on several TV programmes earlier, threatening to perform a medley of his hits from each decade in the 6-minute time slot. Beginning with a snatch of 'Dynamite', a tad more of 'The Young Ones', 'Devil Woman', 'We Don't Talk Anymore' and 'Wired For Sound', thankfully there wasn't much time left for the full 'Millennium Prayer'. And yes, he sang 'Congratulations' in full, even though the Queen hadn't turned up yet. Next up was Lang Lang - a quite magically-gifted Chinese concert pianist who played 'Hungarian Rhapsody #6' and 'Rhapsody In Blue' on a Steinway piano. Staying in the classical genre a while longer, Alfie Boe's first performance of the night went down a storm when he pulled off 'O Sole Mio/It's Now Or Never' with aplomb. I got the feeling that if he hadn't been an opera singer he would have made a great Elvis impersonator. Jools Holland then took his place at the Steinway and as he was tinkling the ivories he introduced the fabulous Ruby Turner who belted out 'You Are So Beautiful To Me'.


Next guest Grace Jones, looking astonishingly very much the same as she did when she starred as Strangé in Boomerang 20 years ago, decided to add a new dimension to her performance of 'Slave To The Rhythm' by hula-hooping her way through the whole song. Talk about multi-tasking! How do you follow that? Ed Sheeran needn't have worried, his magnetic solo performance of 'The A Team', accompanied only by his guitar, held the audience spellbound. Close your eyes and imagine Annie Lennox wearing a long, sparkly dress, long gloves and sporting a pair of white wings. Now open your eyes and find the whole orchestra are wearing wings too. It must be 'There Must Be An Angel' coming up, right? Correct! Just what she was doing mimicking The Who in the 1960s though, is anyone's guess. I wonder if they'll send her the bill for the wrecked microphone?


Renée Fleming's 'Un Bel Di Vedremo' was warmly received, but she had a much greater spotlight to come!
Sir Tom Jones appeared and belted out 'Mama Told Me Not To Come', sounding just the same as he had in the 1960s. He really got the crowd going with a Spanish-style version of 'Delilah', including just about everyone in the Royal Box! Lenny Henry then introduced the arrival of the Queen (including telling her off for being late and missing Tom Jones, which raised a laugh). The first act the Queen watched was Robbie Williams' 2nd slot of the evening; he surely was born to sing 'Mack the Knife', even though he tweaked the lyrics somewhat to include some of the Royal Family! Rolf Harris then introduced Gary Barlow and Andrew Lloyd Webber's specially-written tune for the Diamond Jubilee, 'Sing', with the Commonwealth Band; over 200 musicians and singers graced the stage for the performance, during which the crowd were treated to highlights of Her Majesty's visits to Commonwealth countries on the giant screens.

Another tough act to follow, but Dame Shirley Bassey was up next, belting out the fabulous 'Diamonds Are Forever' (of course). Kylie Minogue's outfit was much anticipated and she didn't disappoint with her skimpy version of a pearly queen suit. Renée Fleming and Alfie Boe appeared on a Buckingham Palace balcony and sang 'Somewhere' from West Side Story, which itself is a modern-day re-telling of the Romeo and Juliet story, so the balcony positioning was just perfect for lovers of the Bard. Sir Elton John had been suffering from a respiratory infection, but possibly only being on his death bed would have kept him away from this concert. He wore a sparkly cerise jacket and managed to get through 'I'm Still Standing' and 'Crocodile Rock' (the latter with help from the audience). The delightfully poignant 'Your Song', which had been a favourite of Princess Diana, must have been performed especially for Prince Harry and the Duke of Cambridge, who appeared visibly moved by the gesture.

Lenny Henry was told to fill in some time so he invited Rolf Harris to sing a capella. When he got over the shock, Rolf began to sing 'Two Little Boys', getting through the first verse before Lenny asked him to stop because the next act was ready. Rolf asked him if he could finish the song but Lenny said no, which invoked boos from the audience! So Rolf asked if he could just finish off the song with the last line, and he sang it to the delighted audience. The extended preparations had been for Motown legend Stevie Wonder who sang 'Isn't She Lovely' and 'Happy Birthday'. Back to the palace for the next act, they didn't blow the roof off, they were singing on it! The group Madness sang 'Our House' and 'It Must Be Love' while images of houses with people dancing inside were projected onto the palace front. Bringing the concert to a close was Sir Paul McCartney, who was bizarrely introduced by comedian Peter Kay as 'Paul Winston McCartney' (Winston was Paul's fellow Beatle John Lennon's middle name). All the performers came back on stage during 'Ob-La-Di Ob-La-Da'. Sir Elton grabbed Sir Cliff for a whirl-around, and I spotted some kissing going on, lucky Dame Shirley! Gary Barlow escorted the Queen onto the stage. I swear I have never seen anyone so nervous as Gary. He was trying to direct her to the correct place and watch she didn't trip up, while not touching her. Poor man! Prince Charles' tribute to his mother was very moving, especially when he mentioned his father's absence due to illness, and asking the crowd to shout loudly so that the Duke in hospital might hear them. The crowd cheered then spontaneously broke into a chant of 'Philip, Philip, Philip' – something I have never heard before. The Queen bit her bottom lip; she looked close to tears. The Prince of Wales continued: 'Your Majesty, you make us proud to be British'. Indeed, she does. Roll on the Platinum Jubilee: God Save the Queen.