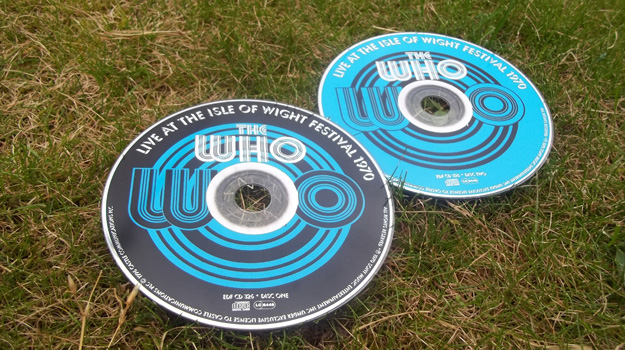 The Who, one of the greatest British bands of all time are particularly famed as one of the best bands to have seen live1. 1969-71 is considered the period when they were at the peak of their career.

The Who Live at the Isle of Wight Festival 1970 captures an evocative performance of them at their best, in front of an audience of 700,000, their largest ever crowd. Although they performed noteworthy appearances at the 1969 Isle of Wight Festival, Woodstock and Live Aid, it is the 1970 Festival that is often considered to have been their greatest live appearance.

The Isle of Wight Festivals

The 1970 Isle of Wight Festival

The Who at the Isle of Wight Festival

Having been one of the highlights of the 1969 Isle of Wight Festival, The Who were quickly signed up to return in 1970. Although Jimi Hendrix was the overall star of the Festival, they were a second headline act. After all, they were the most popular band never to have had a UK number one single. Advertised and billed as performing in the evening of Saturday 29 August, 1970, after The Doors, due to severe delays and overrun they did not actually appear on stage until after 2am on Sunday morning.

They played a similar set to their 1969 appearance. This not only included their own work, both a mixture of their established hits and back catalogue and songs from their Tommy concept album, it also involved material showing their rock'n'roll roots. Other artists' songs like 'Summertime Blues', 'Shakin' All Over' and 'Young Man Blues' were performed live on stage.

Renowned for their theatrical performances, built on dramatic instrument destruction performed live on stage. At Woodstock they had benefitted from a dramatic sunrise during their climax of Tommy. For the 1970 Isle of Wight Festival11 The Who wanted to create something equally dramatic, but were unwilling to leave things to chance. They secretly smuggled some airport lights to the festival, which they planned to use to create a similar dramatic moment. At 4:15am these powerful floodlights were switched to illuminate both the stage and the audience. Unexpectedly, this attracted a vast cloud of moths, which flitted like snowflakes over the audience's heads, creating an outstanding visual accompaniment and natural ovation to the music. For the 1970 Isle of Wight Festival John Entwistle performed dressed as an illuminous skeleton.

The Who played more songs than they had at Woodstock. The last song they performed was 'Magic Bus', one of their weaker songs and perhaps an odd choice for the grand finale. However, this had not been intended to be the last song. Ray Manzarek, organist with The Doors12 who had left the stage before The Who came on to perform, recalled,

'The Who were just amazing. They seemed to be on for two hours or more, and they would have kept on playing but Pete Townshend's guitar13 broke. I remember he came off stage furious that he couldn't keep playing.'

This was an ironic end to the largest performance for a band famous for deliberately breaking their instruments to create a dramatic spectacle.

Message To Love, The Isle Of Wight Festival Film

As it was known that the festival would be a historic occasion, it was planned to film and record the entire 1970 Isle of Wight Festival, using high-spec film cameras and then state-of-the-art 8-track tape. Peter Harrigan, the Press Officer for Fiery Creations, the company that had organised the Isle of Wight Festival, announced,

'It won't be another "Woodstock", this will be something entirely new in cinema'.

Sadly the financial fall out from the festival caused the liquidation of Fiery Creations, and the film and soundtrack of the festival, originally intended to be called The Last Great Event, was at first delayed and later trapped in the legal wrangling. Murray Lerner's feature length film summarising the festival finally emerged in 1995, on the 1970 Isle of Wight Festival's 25th Anniversary, named Message To Love: The Isle of Wight Festival 1970, along with an accompanying album. This contained two Who songs: 'Young Man Blues' and 'Naked Eye'.

The Who - Live At The Isle of Wight Festival 1970 Release

All songs were written by Pete Townshend except where stated.

Chris Charlesworth, the reporter for Melody Maker, said on the album's release,

'This is The Who as they never were before or again, at the height of the triumph of Tommy before it became a millstone around the group's neck. This is The Who, a group that could have big hits and still be cool, sell millions and still be 'underground'.'

Listening To You: The Who Live At The Isle of Wight Festival 1970 - The Film

The lengthy-titled Listening To You: The Who Live At The Isle of Wight Festival 1970 film of this performance was finally released in 1996 on VHS and later re-released on DVD. It is credited as being directed by Murray Lerner, who recorded the entire festival.

Curiously the song order has been re-arranged to have all non-Tommy material at the beginning, and does not contain all the songs performed, lasting only 85 minutes. The concert is rated 15.

The inside cover of the DVD contains the classic 1970 Isle of Wight Festival poster design by Dave Roe17 and contains a contemporary press cutting review of the festival from Melody Maker and NME.

Performances on the Listening To You: The Who Live At The Isle of Wight Festival 1970 film are:

When John Entwistle died in 2002, it was this film footage wearing the black jumpsuit with an illuminous skeleton outline that was most-used to accompany the television news reports of his death.

In 2004 The Who again headlined the Isle of Wight Festival, for the third and, to date, final time. The Who's set included nine songs that they had played at the 1970 Festival; 'I Can't Explain', 'Substitute', 'Naked Eye', 'My Generation', 'Pinball Wizard', 'Amazing Journey', 'Sparks', 'See Me, Feel Me' and 'Magic Bus'. Six of these had also been played at the 1969 Isle of Wight Festival18.

Roger Daltrey, when interviewed and asked about his previous Isle of Wight Festival appearances, simply said,

'It feels good to be back on the Island, it doesn't seem like anything has changed...

All I can remember about playing in '70 is getting drunk with Jim Morrison19, but [he] died and never bought his round.'