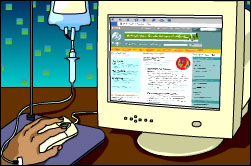 It's summertime, which means it's holiday time for many, so hootoo can seem like it's sort of 'aestanating'1 (which isn't really all that different from hibernating this 'summer') at times. Still, a few undeterred and brave Researchers joined the ranks of the ACEs, and as with the Scouts, they've been thrown in at the deep end. Let's welcome (in alphabetical order): Aries, Aximili, Bob Stafford and Fizzymouse.

In other news: after many people had suggested it, the Front Page now features one 'old' Edited Guide Entry alongside two new ones, hurrah!

Another feature that has been suggested and discussed ages ago is the 'Entry of the Month' — with no results so far. Let's see if we can kick it off, please; your feedback is wanted!

I'm constantly trying to challenge people to write for the Edited Guide and was once again lucky to have some (rather unexpected) feedback there. bomdon, who wrote his very first entry about 'Cooking with Steam' as an answer to an entry I had in Peer Review at the time, came into my journal and said:

Come on, prod me into writing another article. I don't seem to get off my lazy bum without a push and a nudge!

So I challenged him to write an entry about carpets. I was so pleased about his request that I wrote a little poem for him. That's the spirit of h2g2: people finding inspiration by reading and discussing other Researchers' Guide entries.

Do you read the Talking Point on the Front Page? There is a new, mostly very interesting topic every week. One of the last topics was about Learning Languages. Do you speak a second language? If not, do you regret that you don't? I'm glad I do; knowing English and being able to join hootoo opened up a fascinating, new world for me. I've never written anything in my native language, but since I started writing for hootoo, I've become addicted somehow. It's a challenge which is hard to resist. You now may argue that you'd all be better off if I'd never started writing, but hey. And on that note, I'll stop for today.