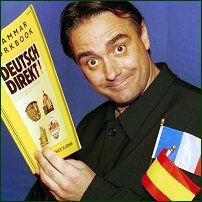 Many of you will be reading this across the globe; and the chances are that there will be quite a few of you for whom English is a second language. However, only a fifth of 15-year-olds in the UK now learn a non-English language.

The somewhat idealistic creator of Esperanto, a Pole called Lazar Zamenhof, thought if everybody had the ability to speak an international second language, one which was entirely neutral and had no political connotations, then maybe there would be no more wars.

Or do you think even if Esperanto had really caught on, maybe it wouldn't have solved mankind's lust for war?

After all, just look at the unfortunate Babel Fish:

'Meanwhile, the poor Babel fish, by effectively removing all barriers between communications, has caused more and bloodier wars than anything else in existence.'