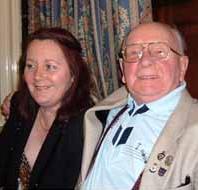 ...to be willing to march into Hell for a Heavenly cause

- 'The Impossible Dream' by Joe Darion

Frank Wolstencroft was born on 3 March, 1918, the sixth of a family of ten children, in Ashton-under-Lyne, Manchester, England. He studied to become a dental technician but when war was declared against Germany in 1939, Frank enlisted in the Army and was assigned to the Lancashire Fusiliers.

Frank and his comrades were ferried across the English Channel to fight on the beaches of Normandy, just after D-Day. He was shot in the leg and the bullet travelled up inside his body and came to rest embedded in his lung. He contracted peritonitis, and was given three weeks to live by the triage doctor.

Violet, his wife, received a postcard saying her husband had been wounded, but it was two weeks before she heard any more news:

For a whole fortnight I didn't know whether I was a wife or a widow.

Determined not to die, he defied the doctor and death itself and returned to the arms of his loving wife to convalesce. The bullet is still there to this day, as it is deemed too deep to remove without killing him.

They received a congratulations card from Her Majesty the Queen on the occasion of their diamond2 wedding anniversary in 2001.

Their extended family has grown to nine grandchildren and one great-grandchild (as of 2007).

When he was demobbed, Frank, like many others, struggled to gain regular employment. He worked in shops as a glorified delivery boy but with a wife and child to support, he never stopped looking for a better opportunity. They were living in Leeds, Yorkshire at the time and a rare treat was a visit to Elland Road to see Leeds United AFC play football. The tickets were supplied by John Charles, the famous Leeds player, whom Frank used to give a lift home to (on his motorbike), after Charles' training sessions. In those days, footballers were not paid enough to run their own transport.

In 1954, they seized an opportunity to purchase a grocery shop with living accommodation above in Cleethorpes, Lincolnshire. Violet was already expecting their first daughter, Ann, but they didn't know for sure until after the move. Nobody told them that during the great storm of 1953, the shop, one street away from the coast, had been flooded. Frank had to renovate the living area as well as learn the business from scratch, working in the shop six days a week and spending every Sunday cleaning it and all the machinery.

Holidays were spent with relatives in Plymouth and Ashton-under-Lyne, with Frank doing all the driving, as Violet never learned how to drive. As they were self-employed and had no family nearby to help, the shop had to be closed for a holiday, so they were infrequent. Violet had two more children: another daughter, Yvonne, and at last a son, Robert, was born. They attempted to sell the shop due to the increase in the family and the lack of living (and sleeping) space.

Unable to find a purchaser, the shop was rented out on six-monthly leases to the same woman. Further attempts to sell the shop were scuppered by the tenant grocer refusing to allow the prospective buyer to view the business books. The shop rent wasn't enough income to feed a family of six, so Frank set about trying to find a job, which, being in his mid-forties and poor health, wasn't optimistic. For a few months Violet took on a 'Lollipop Lady' post to help the family finances.

Having been originally turned down by the police authority, upon reapplication Frank was offered the post of traffic warden. Ever the affable, friendly and concerned man, he soon learned where all the OAPs on his 'beat' lived, especially those living alone. They got used to him calling to see if they were all right and frequently invited him in for a welcome cuppa. Frank used to joke that he got through more cups of tea than he gave out tickets, but no one at Cleethorpes Police Station complained and you would be hard-pressed to find anyone who spoke badly of him.

One day, a massive car parked on double yellow lines in St Peter's Avenue, the main shopping centre in Cleethorpes. Out of the car stepped a glamorous woman, the actress Diana Dors, who excused her bad parking on account of being a woman. Frank issued his ticket but Ms Dors spent twenty minutes trying to talk him out of it, garnering quite a crowd in the process. In the end she accepted her fate and said the fine was worth meeting such lovely people.

Another memorable occasion for the family was when a huge truck pulled up outside the house. It was in a cul-de-sac, so this was a very unusual event. Out of the cab jumped Frank and a young man who spoke not a word of English. Violet was used to her husband bringing home waifs and strays and over cups of tea, a hot meal and lots of gestures and sign language, it turned out he was Polish and he was heading for Hull. When the driver left to continue his journey clutching a hand-drawn map, Frank and Keith walked up the street directing him, as he had to reverse the lorry quite some way. A few weeks later Frank received a postcard from Poland — perfectly addressed with the message 'Thank You' and an indecipherable signature.

Frank had his first heart attack in 1977 at the age of 59. He was forced to retire early but he missed his job and he continued to visit the old friends he had made until they had all passed away.

Frank still does all his own DIY and gardening and he enjoys cooking. His own recipe for chicken soup is legendary in the family. He steadfastly refuses to 'employ digital tv', but he enjoys the wrestling programmes his daughter tapes for him every week.

At the age of 84, Frank and Violet bought a home computer, which they both enjoy using. He regularly reads entries on the h2g2 Front Page and is very proud of his daughter's Edited Entries.

Frank is an active member of the Normandy Veterans Association, Grimsby Branch No 1, and in 2004 he and his old comrades paraded in front of Her Majesty the Queen in France.

He laid a wreath on Remembrance Sunday, 14 November, at Cleethorpes Cenotaph on behalf of the Lancashire Fusiliers, looking very smart in his NVA blazer and beret with distinctive yellow plumage.

Frank collected donations for the Poppy Appeal outside a large supermarket one Saturday a year for over 30 years. Dressed in his NVA blazer and wearing his war medals, not many passed him by without contributing. The Royal British Legion recognised this achievement in 2005, bestowing upon him a long-service medal and framed certificate. He laid another poppy wreath in 2005, watched by his loving and proud family. Frank compiled an entry for the Edited Guide on the History of the NVA.

Frank buys flowers for his wife every week. He says he won't be taking them to her grave, so she might as well have them while she's alive and can appreciate them.

If your mother goes before me, I hope I die the very next day.

Another Battle to Fight

On 8 December, 2005, Frank was diagnosed with inoperable stomach cancer. Chemotherapy was not advised due to what it was expected would happen to his quality of life, so the prognosis was enjoy the time you have left. He is having great difficulty eating and digesting food so he's practically on a liquid diet, he says he feels like a baby again. Frank spends his time with his wife and family and reading the new Edited Entries on the front page of h2g2.

And I know if I'll only be true, to this glorious quest,

That my heart will lie peaceful and calm when I'm laid to my rest...

And the world will be better for this:

That one man, scorned and covered with scars,

Still strove, with his last ounce of courage,

Frank was admitted to St Andrew's Hospice, Grimsby, on 6 November, 2006, for continued palliative care. A highlight was watching the Queen lay her wreath at the Cenotaph on Remembrance Sunday, the first Frank and Violet had watched 'live' on television. A week later, on 20 November, 2006, Frank passed away. He received full military honours at his funeral on 28 November; a Union Jack covered his coffin and atop was a wreath of poppies from the Royal British Legion.

1The author.2Sixty years of marriage.