Great Circle Routes Content from the guide to life, the universe and everything 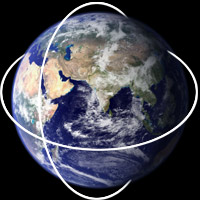 Simply stated, the shortest possible route between two points on the Earth's surface follows a great circle. It should also be stated that following the shortest distance to your destination does not necessarily mean you will spend the least time getting there if, for example, you're on foot and the Alps happen to be in the way, or you're sailing and the doldrums happen to lie along your path. Outside of these and other similar inconveniences, a great circle route is ideal.

You can find the great circle route between any two points on a globe by pulling a string tightly between both hands and pressing the string down on the globe while also keeping it taut. If you manage to do this so that the string touches the two points, you have found the route in-between that uses the least string and is therefore the shortest distance. Congratulations.

Unfortunately, globes do not fit handily into small spaces such as control rooms or cockpits and it is more likely that you will find a map drawn on a flat sheet instead. We will return to this problem later, but firstly, a definition is in order.

A Great Circle is the largest circle that can be drawn on a sphere1. To see this, picture the trace of an imaginary sphere as it is held above a sheet of imaginary paper and slowly lowered so that it passes through the sheet. When the bottom of the sphere first touches the sheet a dot will appear. As it continues, a circle will appear on the sheet that will become larger and larger until the sphere is exactly halfway through. Then the circle will diminish down to a point again and disappear. So, the largest possible circle occurs when half of the sphere is above the sheet and half is below.

Early navigators would have preferred a course on which the compass bearing remained constant. While following a course of constant bearing is harder on the legs because it will generally be longer, it is easier on the brain because it requires no computation. On Mercator projections3, which were common among early maps made by Gerardus Mercator4, and which also required no computation5, a line of constant bearing is any straight line drawn on the map - this was in fact the goal of Gerardus. On the Earth, such a path will appear as a spiral. On the other hand, great circle routes that follow neither the equator nor any meridian always appear curved on Mercator projections6.

If you must use a map to navigate a great circle route, then it is best to use one made for the purpose. The gnomonic projection makes just such a one. The gnomonic projection is accomplished by holding a flat sheet of paper against a lighted globe so that the centre of the sheet touches the globe at the point you wish to depart from. Then any straight line drawn through this point on the projection represents a great circle. Handy, but a new map will be needed whenever you wish to change your point of departure.

A Modification to the Great Circle

As stated at the outset, things can get in the way of your great circle route. The following is taken from Bowditch, American Practical Navigator, 1938, page 105:

It frequently happens when a great circle route is laid down that it is found to lead across the land, or carry the vessel into a region of dangerous navigation or extreme cold which it is expedient to avoid; in such a case a certain parallel should be fixed upon as the limit of latitude, and a route laid down such that a great circle is followed as far as the limiting parallel, then the parallel itself, and finally another great circle to the port of destination. Such a modification of the great circle method is called composite sailing.

The Polynesians were known to navigate by the stars and follow great circle routes. To understand this, first suppose that you are somewhere in the northern hemisphere and you wish to travel to the North Pole. It happens that Polaris, also called the Pole Star, hangs out above the North Pole. So, if you set your course straight for this beacon, you will be travelling due north along a line of longitude and your route is a great circle. If you wish to travel to some place other than the North Pole, well then, you have a problem because all other stars in the sky appear to rotate about Polaris and won't stay put. However, if you were able to stop the universe for just a moment, then at that precise moment some star would be stationary above your chosen destination. You could set your course straight for that star and, here's glory for you, you will be on a great circle route.

Suppose that you, as an ancient or at least antique Polynesian, while unable to stop the universe, are instead very observant and you have kept track of which stars pass above which islands. You notice that the same stars pass over the same islands, but appear somewhat earlier each evening. If your sense of time is reasonably acute, as it very probably is7, then you have a very good idea when a particular star is above a particular island based on when that particular star appeared over your horizon and how far away you reckon that island to be. Now, putting this all together, say that you know it is about two hours after sunset and that a particular star is above Hawaii. If you set a course for that star, you are on a great circle route to the Big Island. Well - at least for a little while, but now it's three hours after sunset and you know which star is the next above Hawaii, and so on. You can adapt this method to modern times by calling or emailing someone at your destination and asking which star is directly overhead and then setting your course for it. Unfortunately, cloudy skies will foil this method.

If you enjoy this kind of thing, then you may want to read Finding Your Way Without Map or Compass by Harold Gatty. Most libraries have it - first, call the library some evening and ask them which star is overhead at the moment, then you can go straight there.

1It should be noted that the Earth is not actually a sphere, but an oblate spheroid - this is a satisfyingly technical way of saying that it is flattened at the poles. In fact, the polar radius is 6,356,752m and the equatorial radius is 6,378,137m - a difference of 0.3%. Navigation tends to involve a lot of approximations and calling the Earth spherical is a relatively minor one.2Actually, compass bearings generally deviate from true bearings by an amount that varies as you move about the earth. This variation is referred to as the declination and is really a nuisance. Let's just ignore it for the sake of this discussion.3Map projections are so-called because, conceptually, they are arrived at by installing a light bulb in the centre of a transparent globe and allowing the features on the globe to project onto a sheet. How the sheet is held, whether it is flat, rolled, or folded and where and how it touches the globe all determine the type of projection.4It may come as no surprise that the Mercator projection was named after someone - in this case Gerardus Mercator (1512 - 1594), but it is actually known to have appeared at about the time of his birth on a small map on the cover of pocket sundials made by Erhard Etzlaub (1462 - 1532) of Nuremberg. In any case, Mercator developed his map to aid navigation because any straight line drawn on it will be a line of constant bearing.5The early maps of Gerardus Mercator showed longitudes as equally-spaced vertical lines, and latitudes as horizontal lines progressively spaced further apart towards the poles. We moderns used to use secant tables and now we use computers to determine the spacing, but Gerardus more likely made this determination graphically.6To actually see what a great circle route looks like on a mercator projection, link to Great Circle Mapper. You will be required to enter the IATA codes for points of departure and arrival. Here are two to get you started: London Heathrow Airport (LHR) and Roswell Crash Site (ROW) - so you would enter 'LHR-ROW'. Have fun.7But please do not test this by removing your watch on a day with an important meeting scheduled.