The Legend of the Tower of London Ravens and the Fall of the British Monarchy Content from the guide to life, the universe and everything 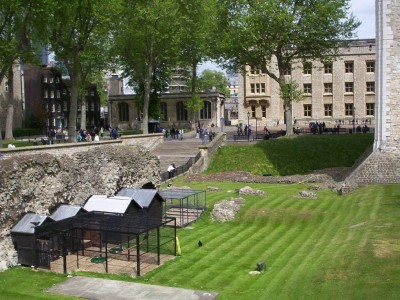 Ravens are jet-black members of the corvid family, stealthy, intelligent birds which have distinct personalities. They can mimic mobile phone ringtones and emergency vehicle sirens. Captive pet ravens can also be taught to say words1. There is a legend that the ravens at the Tower of London protect the kingdom, and if the last one ever leaves, the Tower will crumble and the Monarchy will fall. The Tower of London has a bloody history which dates back to the 11th Century. It is a fortress castle which houses the UK's Crown Jewels, including the Koh-i-noor diamond and the Black Prince's Ruby2. The Tower is reportedly haunted, but we're not concerned with ghosts here, headless, blue-blooded or otherwise. This entry features another queen entirely – the 14-year-old queen of the Tower ravens, Merlina, who disappeared from the Tower's grounds during late 2020 and now feared to be deceased.

The legend of the ravens at the Tower of London began with King Charles II, who was the first monarch following the Interregnum (1649 – 60). Restoration of the Monarchy involved the creation of new crown jewels as the old ones had been sold off and the gold melted down to create coins. There is a great deal of pomp and ceremony surrounding royal life, but there are times when some personal advice is needed, and who better to supply this than an astrologer? Charles II was a superstitious man, and he didn't want to make the same mistakes as his father, Charles I, who had not only lost the monarchy but his head, too. Allegedly, the royal astrologer told the king that the monarchy and the kingdom itself depended upon the continued residence of the ravens at the Tower of London. We don't know why the astrologer favoured ravens, whose appearance was thought to be a bad omen3. Perhaps one was his animal spirit guide, or he felt sympathy for their bad publicity, or maybe he believed in therianthropy4. He must have been persuasive, because the king ordered the Tower ravens' protection – against the wishes of the very first Astronomer Royal, John Flamsteed5, who had an observatory in a turret of the White Tower, which is known today as the Flamsteed Turret. There's another story that it was Flamsteed who persuaded the king not to have the birds culled as it was deemed unlucky to kill a raven. Charles II could hardly be considered a lucky king, the plague and the Great Fire of London occurred under his watch, and there was an attempted theft of the Crown Jewels at the Tower; albeit botched, the crown and sceptre suffered damage and people were injured during the robbery. He was a canny king though, and he managed to please everyone. He founded the Royal Observatory at Greenwich so Flamsteed could continue his important work away from avian distractions, and the ravens have been catered for at the Tower through successive royal dynasties.

However their reprieve came about, the Tower ravens have enjoyed royal protection since the 17th Century. One of the Yeoman Warders, colloquially known as Beefeaters6, is in charge of their care. His title is the Ravenmaster, of course. At least six ravens are in residence at all times, on the orders of Sir Winston Churchill, who became alarmed when the royal ravens dropped to just one pair, Gripp and Mabel, just after the Second World War. Gripp was named after Charles Dickens' pet raven Grip, who was so beloved by the author that when Grip7 died, his owner had him stuffed and put on display8.

The royal ravens are kept in pairs in aviaries next to the Wakefield Tower overnight to protect them from marauding urban foxes9. After a breakfast of raw chicken legs they are allowed out to roam the grounds, where they delight and tease human visitors with their attention-seeking antics. They are tempted back into their quarters at suppertime with dry biscuits soaked in animal blood. Also on the menu are mouse tartare, rat carcass and rabbit filet, Tower kitchen scraps, and eggs once a week. They are also partial to offal - when Hardey passed the milestone of 21 years' service at the Tower, he was rewarded with a sheep's heart to feast on. Tower visitors are discouraged from feeding the royal birds due to the risk of injury (but ravens are, by nature, scavengers, and will try to steal a tourist's snacks).

All of the Tower ravens are named and ringed in case they venture a little too far from barracks. One, named Grog, who had lived at the Tower for 21 years, made his escape in 1981 and was last seen near a pub called the Rose and Punchbowl in the East End. One miscreant, who took a fancy to local television aerials, was unceremoniously discharged from royal duty and despatched to the Welsh Mountain Zoo. Sadly, a Tower raven called Black Jack dropped dead from shock at the sound of cannon fire marking the funeral of His Grace the Duke of Wellington on 18 November, 1852. As was fashionable then, Black Jack was sent to a taxidermist where he was stuffed and mounted. He still resides, resplendent in a carved wooden display case, in the Tower's private museum. One prodigious royal raven, Jim Crow, lived at the Tower until he was 44 years old. A breeding pair, Huginn and Muninn, arrived at the Tower in 2018. They have their own private aviary built in the castle moat. Their first batch of eggs produced four chicks; one, named George after the patron saint of England, remained at the Tower. The other three chicks were sent to Mike Keen, landlord of The Boot pub in Freston, Suffolk, to be raised alongside his own pet raven. So the disappearance of queen Merlina, leaving just seven ravens on duty at the Tower: Erin, George, Gripp, Harris, Jubilee, Poppy and Rocky, needn't ruffle too many feathers. There are ravens to spare, just awaiting the call of the Ravenmaster. 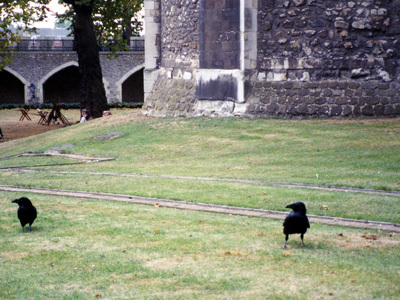 1'Halloa old girl' was a favourite expression of Grip, one of Charles Dickens' pet ravens.2Which isn't a ruby at all, it's a red spinel.3Ravens were present at the Tower during the executions of Queen Anne Boleyn (1536) and Lady Jane Grey (1554). 4A human who can change into an animal, allegedly.5Astronomers today know that birds can be a pest around observatories, so we can understand Flamsteed's angst.6This is an elite group. More people have been in space than have been Yeoman Warders. (At the time of writing, the figures are 569 astronauts vs 410 Beefeaters, in case you're interested).7Grip the raven is immortalised in Barnaby Rudge. Edgar Allen Poe was inspired to write his famous 1845 poem The Raven after he reviewed Barnaby Rudge.8After Dickens died in 1870, the stuffed-and-mounted Grip was bought by Colonel Richard Gimbel. This curiosity from a bygone age can still be viewed (when circumstances permit) at the Free Library in Philadelphia.9Two royal ravens were killed by a red fox in 2013 and security was beefed up.