Common Kingfishers Content from the guide to life, the universe and everything 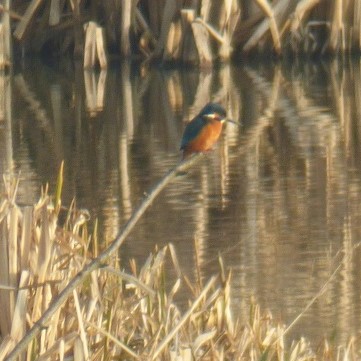 The Common Kingfisher (Alcedo atthis) is a small but distinctive bird that can be seen across Europe and in parts of Asia and Africa. Some members of the species stay relatively close to where they hatched (such as in the UK), while others migrate over longer distances (for example Common Kingfishers from northern Europe travel to the Mediterranean for the winter).

These house sparrow-sized birds have colourful plumage - the feathers on their heads, backs and tails shine with an iridescent blue colour, and their chest feathers are orange. Females look similar to males, but their bills are orange and black, rather than all black. Despite their bright colouring, Common Kingfishers are still camouflaged against reeds or water, for example, so you have to look carefully to spot them out and about. Even if you don't see the flash of blue as they zoom past, or notice them perching near a water source, you may hear their distinctive high-pitched 'shreee' call when they are nearby.

Common Kingfishers mainly catch and eat fish, as their name suggests, but they may also eat water-based insects such as dragonfly nymphs. They dive into the water from a perching post when they see a fish or other food item swimming by - nictitating membranes ('third eyelids') protect their eyes, and their wings and short tails enable them to manoeuvre around under the water. If the dive is successful they return to their perch and bash their catch against it, then they swallow the food head first and whole. Some time later the bird ejects a pellet from its beak that contains fish bones and other indigestible items.

Common Kingfishers are usually solitary birds who each have their own feeding territories, but they come together in summer for the breeding season. A pair will build a nesting tunnel in a riverbank or similar vertical structure near water. They may be able to make use of a tunnel that has been dug by another creature, such as a vole. They could use an artificial structure such as a pipe, or they may have to dig a tunnel themselves, using their beaks to dislodge the mud and their tails to sweep the particles out. At the end of the tunnel they create a nesting chamber where the female lays up to seven eggs.

Both parents take turns incubating the eggs and finding food. The eggs hatch after about three weeks. Although the newly-emerged chicks are completely bald, and their large eyes are not able to open, they can eat small fish whole. Their eyes open after about a week, and feather shafts emerge when they are about two weeks old. The fledglings leave the nest three to four weeks after the day they hatched. They are fed by their parents for a few more days, but quickly learn how to dive for their own fish. The oldest Common Kingfisher known to the Royal Society for the Protection of Birds (RSPB) was 21 years old.

There are estimated to be around a million Common Kingfishers globally, so they have been classed as Least Concern on the International Union for Conservation of Nature’s Red List. However, the population in Europe has decreased in recent years, mainly because of river pollution. Cold winters are a threat to them because if the water in their territory freezes, they are not able to feed. Common Kingfishers are food for other creatures such as sparrowhawks, rats, cats and mink. In the 19th Century they were killed by collectors for their beautiful plumage, and they were also persecuted for eating 'game fish' (fish that were bred for sport). In the UK Common Kingfishers are now a protected species, so their numbers have increased since the 1980s.

There are several species of bird around the world that are named 'kingfisher'. They all have the distinctive long and broad bill and most of them are brightly coloured, but not all of them eat fish. For example, the Greyheaded Kingfisher, Halcyon1 leucocephala, from sub-Saharan Africa, has some iridescent blue feathers like its cousin, but mainly eats land-based insects such as grasshoppers, locusts, crickets and cockroaches. The Laughing Kookaburra, Dacelo novaguineae, from Australia, is also a member of the kingfisher family.

1'Halcyon Days', meaning peaceful days of times past, are named after kingfishers, as the birds were believed to have the power to calm troubled waters (perhaps because many kingfishers that eat fish find it easiest to go out to hunt on days when the water in lakes is still and clear).