Odonata - Dragonflies, Damselflies and Demoiselles Content from the guide to life, the universe and everything 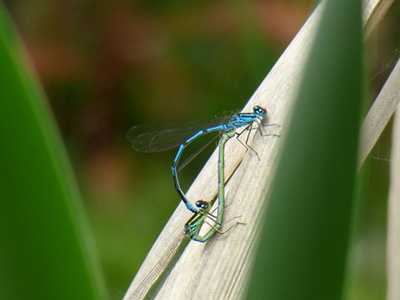 Dragonflies, Damselflies and Demoiselles are beautiful and distinctive insects that can often be found darting about near ponds or other watery places during the warmer months of the year. Their iridescent wings glint in sunlight, and their bodies shine with colours such as bronze, metallic green, bright red or electric blue. They are all members of the Odonata1 order of insects. Dragonflies are in the suborder Anisoptera, meaning 'unequal wings', and Damselflies and Demoiselles are in the suborder Zygoptera, meaning 'paired wings'.

Dragonflies, Damselflies and Demoiselles are all insects, so they have a head, thorax and abdomen, two eyes and six legs. They also have two pairs of wings, and their abdomen is long and divided into segments, giving them the characteristic long-tailed shape.

As the suborder name suggests, Damselflies and Demoiselles have wings that are all similar in shape. When at rest, their wings are folded to be almost parallel with their body. Dragonflies have wing-pairs that are different shapes and the wings tend to sit at right angles to their bodies when they are at rest. Demoiselles have coloured wings, while Damselflies and Dragonflies have clear wings with one coloured cell, called the pterostigma, near the tip of each wing.

All these insects start life as eggs that are usually laid in fresh water such as ponds or streams. The larvae, or nymphs, hatch out of the egg and become voracious underwater predators. As they grow by moulting their smaller skins, so the size of their prey increases, from single-celled organisms to other insect larvae and even snails, tadpoles and small fish.

Before the final moult, which takes place weeks, months or years after hatching depending on the species (and also related to how warm the environment is), the nymph climbs up a leaf, stem or other support and then the adult insect emerges from its skin. It takes several hours for the newly-emerged adult to stretch out its body and wings and dry off enough to be able to fly.

The adults feed on mosquitoes and other small insects. After they have matured, which can take a few days to a few months, again depending on species and climate, they become ready to reproduce.

The eggs and sperm are produced at the very tip of these insects' long abdomens. Males transfer their sperm to 'accessory genitalia' near their legs, leaving the tip of the abdomen free to clasp the neck of a female. If the female is willing to accept the sperm, she moves the tip of her abdomen up to the male's accessory genitalia. After the sperm has been transferred, the female lays eggs in or near water, usually while being guarded by the male. The insects live in adult form for only a few weeks, but the cycle begins again when the eggs hatch.

Dragonflies, Damselflies and Demoiselles are found around the world, from Alaska to Australia. They range in size from the tiny East Asian dragonfly Nannophya pygmaea with a 2cm wingspan, up to the Central American demoiselle Megaloprepus coerulatus whose body is up to 15cm long.

Odonata in the UK 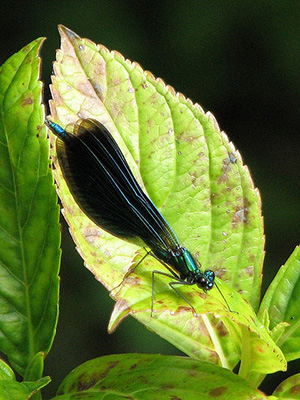 Near canals, ponds or marshland, the Common Blue Damselfly is common2. The male is blue with black markings, and the female may be blue or green. The rarer Azure Damselfly is very similar except the tip of the male's tail is blue and black rather than all blue, and there is a black U-shape just below its thorax rather than a black dot. Emerald Damselflies are also common - the male is bluey-green and the female is green and bronze. The Large Red Damselfly is of course red, but the female may have more black markings than the male. Southern Damselflies are rarer, but flocks of the tiny iridescent blue needle-like insects can be seen in southern England3 on warm sunny days.

There are a number of other Dragonflies and Damselflies you may encounter, but there are good books and field guides you can get to help you to identify them. So, on the next warm and sunny day, take a moment to sit by a pond or stream and see if you can spot one or more of these delightful insects. 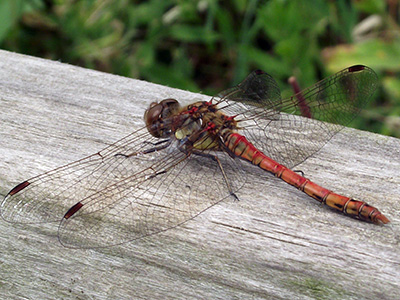 1Meaning toothed-ones, as they have jaws that can shoot out to catch prey.2As you might expect from its name.3For example at Titchfield Haven in Hampshire.