HMS Victory - First Rate Museum Ship Content from the guide to life, the universe and everything 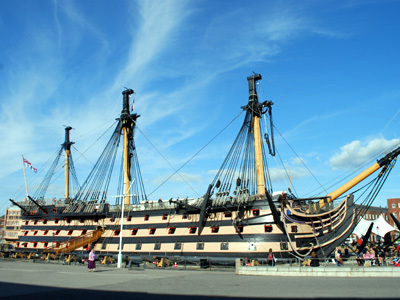 HMS Victory was launched in 1765. She1 is best known as the flagship in Horatio Nelson's fleet of the Royal Navy and the ship on which he died during the Battle of Trafalgar in 1805. HMS Victory now forms part of the Portsmouth Historic Dockyard museum complex in Hampshire.

In 1758, during the Seven Years War between Britain and France, construction of the ship that would become known as HMS Victory commenced. Based on the design of HMS Royal George, HMS Victory was known as a 'First Rate ship of the line' because of having three gun decks and being able to carry 100 guns ('Second Rate ships of the line' had three gun decks and 90-98 guns, while the most common ships of the line were Third Rate, with two gun decks and 74 guns). Like her sister ship, HMS Victory was made from wood (mainly oak), weighed about 3,500 tons fully laden, had a hull over 200ft long and more than 50ft wide, featured three masts with 6,500 square yards of sail, and had a top speed of 10 knots (approximately 12 miles per hour). The Seven Years War ended in 1763, so although HMS Victory was launched in 1765, she did not see service until 1778 when she was engaged in the Battle of Ushant against a fleet of French ships in the Channel.

In the early 1790s, HMS Victory served in the Mediterranean Sea but by 1797 she was considered only fit to be a hospital ship. In 1799 the Royal Navy was in need of a ship with three gun decks, and the decision was made to restore HMS Victory. Over the following three years, 'The Great Repair' took place, during which time weak timbers were repaired, the masts were replaced, and the gun decks were fitted with lighter, longer-range guns. She was also painted in black and yellow rather than red as previously.

The Battle of Trafalgar

HMS Victory was relaunched in 1803, and became Vice-Admiral Nelson's flagship. By 1805 she had a crew of 821, including 211 Able Seamen under the command of Captain Thomas Hardy, and a complement of 146 Royal Marines.

The Battle of Trafalgar took place on 21 October, 1805, in accordance with Nelson's plan. HMS Victory attacked the French flagship Bucentaur and engaged in close combat with Redoubtable. As a result of the battle, 57 of HMS Victory's crew lost their lives, including Nelson himself, and 102 were injured. The ship sustained damage to the masts and was towed to Gibraltar where repairs were carried out to enable her to travel to Portsmouth. 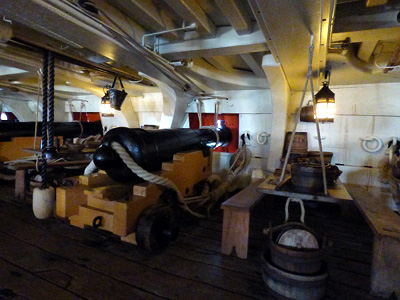 Between 1808 and 1812, HMS Victory saw service in the Baltic Sea as a Second Rate ship defending merchant shipping routes. On 7 November, 1812 she returned to Portsmouth. In 1814 a refit took place, reparing some damage and adding iron brackets to strengthen her structure. The masts and the shape of the bow were altered, to bring her more up to date with the technology of the time. In 1823 HMS Victory's role was as a Guard Ship in Portsmouth Harbour. She was fitted with just 21 guns, but also provided Navy accommodation.

A visit to HMS Victory inspired William Gilbert (of Gilbert and Sullivan fame) when writing the libretto for the comic opera HMS Pinafore (1878).

Two years before the Centenary of the Battle of Trafalgar, a steel battleship (HMS Neptune) collided with HMS Victory in Portsmouth Harbour. The damage was repaired in time for the Centenary in 1905, but the ship's condition deteriorated after that. In 1921, HMS Victory was moved into dry dock. Restoration took place, and the ship's shape was changed to reflect how she would have looked during the Battle of Trafalgar, with the 19th Century additions being removed.

HMS Victory became a visitor attraction between 1928 and 1939. She sustained damage to her keel in 1941 during the Second World War when a bomb hit the dry dock. Another 'Great Repair' took place in 1955, including fumigation to prevent damage by deathwatch beetle. In 2011, laser scanning of the ship identified that the sides of the hull were moving - they were bulging outwards because the supports that had been put in place in the 1920s were not as supportive as water would have been. A multi-million pound project commenced in 2017 to replace the supports with steel props, and to continue the restoration of HMS Victory to her appearance during the Battle of Trafalgar, using the latest technology that enabled detailed examination of the timbers and layers of paint on the ship. 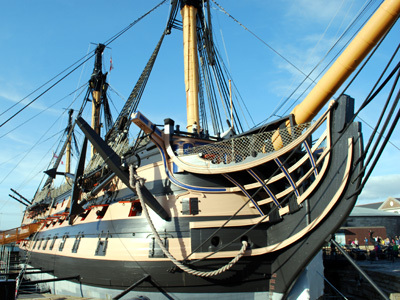 HMS Victory is still the Flagship of the First Sea Lord of the Royal Navy so is the oldest commissioned warship in the world. She is also now part of the National Museum of the Royal Navy, based in Portsmouth Historic Dockyard. There is a charge to enter the ship2, but various types of tickets are available, including ones that are valid for 12 months and allow you to visit all the Portsmouth Historic Dockyard attractions, such as The Royal Navy Submarine Museum, HMS Warrior and the Mary Rose Museum. The Main Deck is not accessible to wheelchair users, but people who cannot climb steps may enter the ship through a gun port to explore the lower gun deck. A DVD documentary plays, to give visitors a view of the whole ship, and a flavour of what life was like aboard HMS Victory when she was in active service.

The Orlop Deck is below the Lower Gun Deck. It contains the Boatswain's Store of ropes and equipment that could be used to repair the ship at sea, and the Carpenter's cabin. The Surgeon worked on that deck, and it was there that Nelson was taken after he had been mortally wounded during the Battle of Trafalgar. The Orlop Deck is so called because it overlaps the Holds where ammunition, food and barrels of fresh water were stored.

On the Lower Gun Deck, visitors can see guns in position at the gun ports, as well as lanterns, ropes, hammocks, mess tables and other objects that the crew would have used in everyday life. Also on this deck are four chain pumps that could pump sea water out of the lowest part of the ship (the bilges).

The Main Deck is also known as the Upper Gun Deck, which could house up to 30 guns. The Forecastle at the bow of the ship houses the Ship's Bell that was used to mark time. Four guns could be housed there, and it contains the Sick Berth, where the medicine dispensary is kept, along with cots rather than hammocks for the ill or injured crewmembers to sleep in.

The Admiral's Quarters are in the stern of the Main Deck, and include private toilet facilities, the Bed Place3, the Dining Room, with furniture that could be folded away during battle and the Day Cabin where Nelson worked on strategy, issued orders, and wrote letters.

The Captain's Quarters, where Hardy was based, are above the Admiral's Quarters, and also include a Dining Cabin and a Day Cabin. The Captain's Quarters opened out on to the Quarter Deck, giving easy access to the Wheel and Compass, to enable the control of the ship. A plaque marks the spot where Nelson fell during the Battle of Trafalgar.

Various events take place during the year. There are 'Family Days', when visitors can meet 'Captain Hardy'. On 'Trafalgar Days', visitors can partake of a meal in the lower gun deck, served on the mess tables, or visit areas of the ship that are usually not open to the public, such as the Ship's Bar.

1'It' has been used as the pronoun for ships by Lloyd's List since 2002, but this Entry will use 'She' in the 'respectable maritime tradition'.2Blue Peter Badge winners get in free.3Nelson slept on a 'campaign bed' or 'tent bed' that could be folded into a chair or table when not being slept in. It was easier than a hammock or cot for him to get into and out of with his one remaining arm (his right arm having been amputated in 1797), as the sleeping surface was not very high off the floor.