The Mary Rose Museum, Portsmouth, UK Content from the guide to life, the universe and everything 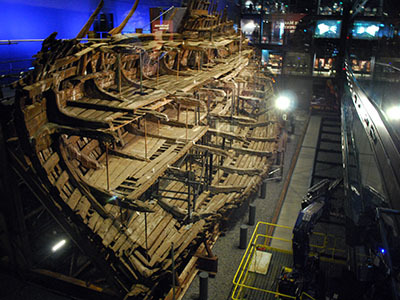 The Mary Rose Museum in Portsmouth, UK is a ship-shaped building that was purpose-built to protect and display the remains of King Henry VIII's warship  Mary Rose. The Museum contains the preserved timbers of the ship, and artefacts from the ship, plus it features the stories of the crewmembers who perished when the ship was wrecked in 1545.

The Mary Rose was launched in 1511. The ship incorporated the latest technology of the time, including improved manoeuvrability, and gun ports on the main deck to enable damage to be inflicted on enemy ships from a distance. The Mary Rose saw battle in the French Wars of 1512-1514 and 1522-1525, but it was at the Battle of the Solent in 1545 between the fleets of Henry VIII of England and Francis I of France that disaster struck.

The evidence for what happened is not conclusive, but the most likely cause of the sinking of the Mary Rose is that the gun ports on one side of the ship were opened, the cannons were fired, and then the ship tried to turn so as to bring the cannons on its other side into firing position. Whether there was a gust of wind that caused the ship to heel too far, or whether the ship was overladen, water entered the open gun ports and the Mary Rose capsized, and sank off the coast of the Isle of Wight.

There were attempts at the time to salvage the wreck of the Mary Rose but they were unsuccessful although some of the objects that the ship had been carrying were able to be rescued from the water. The wreck was rediscovered in 1836 by divers working on the remains of the Royal George, which had sunk in 1782. The Mary Rose had been buried in silt, so several of its guns were able to be recovered, along with longbows and part of the main mast, but a large portion of the ship was not able to be excavated.

The approximate location of the remains of the Mary Rose was worked out by a group of amateur SCUBA divers in the 1960s. In 1967 a committee, including military historian Alexander McKee and archaeologist Margaret Rule, raised money to lease the underwater land where the wreck was most likely to be found. Sonar located a buried feature in 1968, and in the 1970s more guns were found, plus preserved timbers.

Prince Charles dived to visit the Mary Rose in 1975. When it was decided that the ship should be recovered from the water, he became president of the Mary Rose Trust in 1979. The first phase of the project saw more than 19,000 objects excavated, including items such as leather shoes, silk fabric and plant material that would have decomposed if they had been buried on land. The second phase saw the timbers lifted into a cradle so that the ship could be raised from the water. The Mary Rose returned to the surface of the Solent on 11 October, 1982. 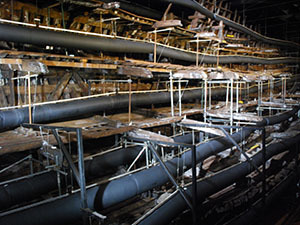 The Mary Rose was taken in the cradle to Number 3 Dry Dock in Portsmouth, and a spray system was installed to ensure that the timbers did not dry out and start to decompose. An arched building including a viewing bridge was constructed over the dry dock and it opened to the public on 11 October, 1983. The cradle was moved into an upright position in 1985 (it had previously held the Mary Rose at the angle the ship had lain on the seabed). The timbers were treated with Polyethylene Glycol between 1995 and 2013. The sprays were turned off in 2013 and pipes were laid along the length of the ship on each level to circulate air around the timbers (so the view for visitors continued to be obscured). The air-drying process was completed (and the pipes were removed) in 2016, effectively preserving the ship for the future.

A new museum building was built around the old one, and it opened in 20131. The building's architects envisioned the Mary Rose as being the pearl in the centre of an oyster. As the new building was larger, it enabled more items to be put on display, including reconstructions of the faces of crewmembers with specific jobs, such as the surgeon, carpenter and an archer. Interactive elements were also included, such as a cannon-shooting game to enable visitors to learn about the different capabilities of the various guns found on board the Mary Rose. Artefacts on display include a backgammon board and other leisure items, food containers, and even the skeleton of the ship's dog, as well as the specialist equipment used by the crew. All this helps to tell visitors what life was like in a 16th Century warship. The range of items that survived thanks to the unusual underwater conditions makes the Mary Rose a valuable time capsule from Tudor England. 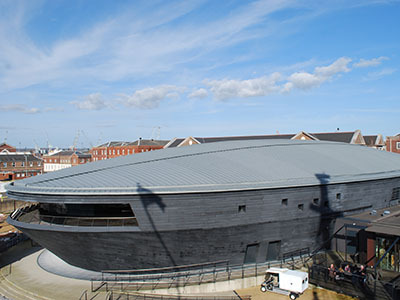 The Mary Rose Museum includes walkways on three levels so that visitors can look2 at the ship from the perspective of the main deck, the lower deck and the upper decks3. Items such as buckets, barrels, coils of rope and cannons are on display opposite the timbers of the Mary Rose itself, in the positions that they would have been in before the ship sank. To add to the poignant atmosphere, occasionally the lights dim and scenes are projected on to the timbers4, so that visitors can see people carrying out the tasks that would have taken place on those decks when the ship was in active service, such as carpentry and cooking in the lower decks, or the loading of guns on the main deck.

Seeing the Mary Rose now compared to in 1984 when all I saw was a mist is a completely different experience ... now the glass walls and curves of the floor really make you feel part of the ship.
- An h2g2 Researcher

The Museum is situated within the Portsmouth Historic Dockyard set of attractions, but is separate from it. There is a charge to enter the Museum, but concessions and family tickets are available, and Blue Peter Badge winners can get in free. There is also a discount if you have a ticket for the Portsmouth Historic Dockyard. Tickets are valid for 12 months so you can get value for money from repeat visits. The Museum is cleverly laid out, and is wheelchair accessible5 - lifts and staircases in various places enable visitors to explore all three floors of the building by flowing through a one-way system, like in an IKEA warehouse (although if you find you need to exit the building before having completed the circuit, Museum staff are available to help you find the quickest way out). Events take place throughout the year, including guided tours, trips to the shipwreck site (which is marked with a buoy) and activities for children.

The car park (including spaces for disabled people with Blue Badge parking permits) is quite a distance from the entrance to the Museum6 and there is a charge to park there. The Museum building contains a small café, and a shop selling a range of books, clothes and souvenirs.

1The old building was dismantled and was completely removed by 2016.2In 2016, glass walls were installed, so that the view of the ship was not obstructed by the window frames that had been installed initially.3An airlock on the upper level enables visitors to enter Number 3 Dry Dock and see the Mary Rose directly, without having to look through glass.4This Researcher was glad not to be alone in the main deck viewing gallery when that happened, as the effect was very dramatic and somewhat spooky.5Unlike the old building, which only had steps up to the top of the viewing bridge.6More than 250m (820ft).