The Royal Navy Submarine Museum, Gosport, Hampshire, UK Content from the guide to life, the universe and everything 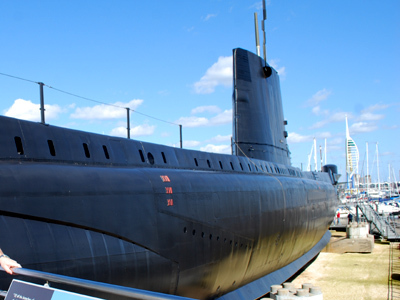 The Royal Navy Submarine Museum is a visitor attraction in Gosport, Hampshire in the UK. As its name suggests, the Museum is a showcase for the history of the submarines of the Royal Navy. It explores what life was like aboard such vessels, and considers the future of submarine technology.

The main museum building contains artefacts from submarines and other vessels that were used to explore the underwater world through the ages. At the back of the entrance foyer is X24, the last surviving example of a 'midget submarine' that served during the Second World War. Exhibits on display elsewhere include engine machinery, toilets and even a folding organ that was small enough to fit through the hatch of a submarine and was used to provide music during religious services. There are hands on activities to help visitors of all ages to get a feel for the submarine technology and the sights, sounds and smells of life underwater.

An adjacent building contains a timeline describing the history of underwater exploration (and warfare) from the time of Alexander the Great onwards. The building's main attraction, though, is Holland 1, the first submarine ordered by the Royal Navy, which was launched on 2 October, 1901. A ramp allows Museum visitors to see right round (and inside) it. Holland 1 was built in Barrow-in-Furness in the UK, to a design1 by the US-based submarine pioneer John Philip Holland.

The Museum also maintains a memorial garden and a memorial plaque commemorating all those who lost their lives in submarine service for the Royal Navy. 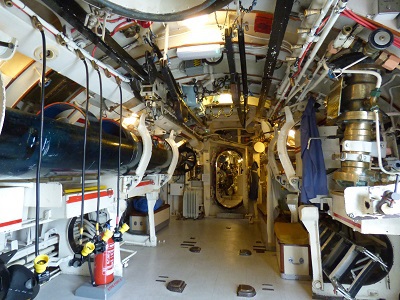 The centrepiece of the Royal Navy Submarine Museum is the submarine HMS Alliance. At 86m (281ft) long she dominates the skyline outside the main museum building. Guided tours are sometimes available, and visitors are free to climb the stairs to explore the length of the vessel by themselves at other times. A lift allows people who cannot manage steps to enter one of the submarine's hatches and see the compartment containing an escape hatch, oxygen masks, bunks and torpedo tubes. The virtual tour on Google Maps gives a good flavour of the layout of that compartment and the other compartments within the submarine.

HMS Alliance was built in 1945, during the Second World War, but didn't enter service in the Royal Navy until 1947. Even though she was bigger than previous submarine models, she was faster than them and had a maximum range of 15,000 miles. In addition to periscopes, guns and torpedoes, she was fitted with new technology - a 'snort mast' to enable the diesel engines to work even when the submarine was submerged.

The submarine contains facilities for a crew of 65 including Officers, Engine Room Artificers, Stokers and Ratings. At any one time, a third of the crew would be working, a third would be sleeping and a third would be awake but off duty. The crew slept in their clothes so as to be ready in case of a call to 'Action Stations' when everybody would have jobs to do. The amount of fresh water that could be stored on board was limited, so it was prioritised for drinking - the men could have a bath in salt water during times when the submarine was safe enough to spend time on the surface of the sea.

In 1958, HMS Alliance was upgraded to enable her to play a role in the Cold War. She was fitted with sonar and new torpedoes with the ability to target enemy submarines as well as ships. To make the submarine even stealthier, the Conning Tower and deck guns were removed to create a sleeker silhouette.

HMS Alliance served well during her long career, but experienced two notable incidents. In January 1968 she ran aground on the Isle of Wight but all the crew was rescued and she was able to be refloated the next day. In September 1971 the crew was not so fortunate when there was a build-up of hydrogen gas that occurred while the batteries were being charged - the gas exploded, killing one man and injuring others. By 1979, HMS Alliance was the last surviving submarine of her class, so she was retired from the Royal Navy Submarine Service and turned into a museum and memorial.

The Museum is part of the Portsmouth Historic Dockyard set of attractions. There is a charge to enter the Museum2, but various ticket options are available, including ones for all attractions that are valid for 12 months so you can get value for money from repeat visits. A waterbus3 operates to take visitors across Portsmouth Harbour between the main Historic Dockyard (which includes the Mary Rose inside the Mary Rose Museum, HMS Victory and HMS Warrior) and the Gosport attractions (the Submarine Museum and the Explosion! Museum of Naval Firepower).

The car park (including spaces for disabled people with Blue Badge parking permits) is quite a distance from the entrance to the Museum4 but there are items for visitors to look at as they make their way along the footpath, such as a submarine's conning tower and a diving suit. There is a small play area for young children, a picnic area, a coffee shop, and a shop selling a range of books, clothes and souvenirs.

1The first submarine designed as well as built in Britain was the A1 that launched in 1902.2At time of writing (2019) Blue Peter Badge winners can get in to the museum and entire dockyard free with their valid badge and card, but must be accompanied by a paying adult.3The waterbus is not accessible for wheelchair users at time of writing (2019).4More than 250m.