The Ultimate Studio Ghibli Film Guide: 1991 - 1994 Content from the guide to life, the universe and everything 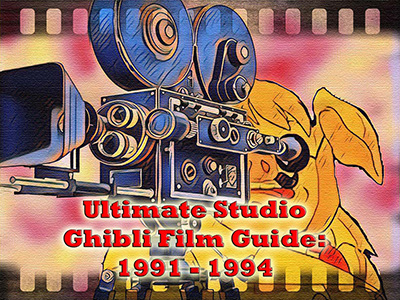 Japan's Studio Ghibli1 animation studio has famously and justifiably risen to worldwide prominence for their superb and unique films. Many of these films were made by the legendary Hayao Miyazaki, although the films made by other directors retain the Studio Ghibli quality and ethos. The studio has also been unafraid of pushing the boundaries in theme, making both lighthearted and harrowing films, as well as covering topics not usually considered likely to attract an audience.

Studio Ghibli films emphasise themes of belonging to one's environment, peace, magic, hard work, wonder, flight, strong and wise elderly women and determined young girls. The spirituality of all living things, as emphasised in Shinto polytheistic beliefs and customs, is particularly significant: all animal and plant life is respected. Other themes include magical castles, which may even walk or fly, and travelling on important journeys by train. Military vehicles or locations tend to be horribly beweaponed, bristling with multiple gun turrets. From the 1990s onwards, the idea of transformation also becomes a key theme, with key characters changing their physical appearance, with humans becoming animals or animals becoming human, which often leads to a transformation of their outlook on life, opinions and attitudes. Miyazaki is a Europhile, and many of his films have European features, including aircraft and architecture. Art nouveau and vehicles from the 1920s to the 1950s are strong artistic influences.

Studio Ghibli at this time became a more coherent, established studio in this period by changing its staff policy. By employing animators directly rather than on a piecework basis it was hoped that that more animators could be trained to become directors and to this end a development programme was introduced. Ocean Waves, a made-for-television film released during this period, would be the first fruit of this plan, .

Below is a summary of Studio Ghibli's films during this period. Also mentioned is whether the films pass the Bechdel Test. This can be summarised as whether the film involves two or more named female characters who have a conversation together that is not focused on men.

During the 20th Century Studio Ghibli's films were little seen outside Japan. In 1996 Disney signed a 15-year agreement to release Ghibli's films on home media worldwide, though it took a surprising amount of time for Disney to release these Studio Ghibli films on the home video market in English - few were released before the 21st Century. As well as the original Japanese actors who voiced each character, the English actors are also listed.

Only Yesterday was inspired by an existing manga about Taeko's life experiences as a young girl, but the scenes featuring Taeko as an adult were an invention for this film. It was considered a risky proposition to make an animated film in Japan aimed at an adult female audience, only for it to attract adults of both sexes and become Japan's highest-grossing domestic film of 1991. In 2014 Time Out Magazine listed it as 61 of the World's Top 100 Animated Films as chosen by animators.

Once again the Shinto belief in nature is to the fore. Taeko prefers a natural life as an organic farmer, living and working hard in harmony with the spirits of nature, than a much higher-paid job in the city. Her love interest, Toshio, also expresses his belief in organic farming by not only discussing not using pesticides and chemicals but also noting how, by working with nature, humans have created the picturesque natural world.

Trains often symbolise journeying through life in Ghibli films and it is notable that both of adult Taeko's significant journeys are taken by train. Not only does Taeko initially come to the countryside by train, it is in a railway carriage heading away from the countryside that she makes her key decision not to leave everything she has just gained behind but to get off at the next station and catch the next train back. The end credits sequence, which like many in their films show what happens next, implies that she did indeed return to her new friends, probably pursuing a relationship with Toshio.

Curiously, Disney never released Only Yesterday. The stated reason for this was that the schoolgirls learn about menstruation at school; despite this topic affecting half the world's population, Disney feels it is completely taboo. It was not until their 15-year contract expired that the film was released in English, by Universal Pictures in the US and Studio Canal in Europe, in time for its 25th anniversary. Most of the English cast, including Daisy Ridley, are younger than the film.

The film developed out of a project for Japan Air Lines, who wanted an animated film celebrating flight to show on their aeroplanes. Though the project developed into a full-length film, JAL remained a major sponsor. They also developed an English-language version of the film, which has since been superseded by the English language version authorised by Disney in 2005. To allow the film to be accessible to all JAL's potential customers, the introductory text appears in ten different languages simultaneously. The English text translation states that the titular character is called 'Crimson Pig', yet this is a name which no-one uses in the film at any point as he is known as 'Porco Rosso' even in the English dub.

Miyazaki developed the project from his manga Hikōtei Jidai (The Age of the Flying Boat). The Yugoslav Wars and fierce fighting in the Adriatic countries of Croatia and Bosnia at the time the film was made particularly encouraged him to add more detail concerning the threat of Fascism in Italy in the 1920s.

The film is a homage to early, pioneering aviators. Curtis is named after the Curtiss Aeroplane and Motor Company that developed many racing aircraft in the period. The Piccolo aircraft company is a fictional combination of early Italian aircraft companies Piaggio and Caproni – the company that developed the 'Ghibli' aircraft the studio is named after - while other characters are Bellini, named after a test pilot, and Ferrarin, after both aircraft designer Carlo Ferrarin and Arturo Ferrarin who flew from Rome to Tokyo in 1920. In the film Porco gets a secondhand Ghibli aircraft engine from Italy's aircraft that came second in the 1925 Schneider Cup. In reality no Ghibli aircraft participated in this race. Marco Pagot, though, is named after Nino and Toni Pagot, who made the first Italian animated feature film, I fratelli Dinamite (The Dynamite Brothers) (1949); Miyzaki had earlier in his career worked with Nino's sons Marco and Gi Pagot.

This film features prominent Ghibli themes including hard-working young women, transformation – other humans would be turned into pigs in Spirited Away - and, of course, flight. Flying pirates had previously featured in Laputa: Castle in the Sky. The film is left very open ended, which led to rumours of a sequel. Miyazaki would again explore his interest in the development of early aviation 20 years later in The Wind Rises (2013).

After making this film, the company moved into new studio facilities.

Ocean Waves was conceived as a television special for Nippon TV to give some of the junior people working at the studio some directing experience that would help the studio continue after Miyazaki and Takahata retired. The film was the first by the studio not made by the founding directors. Although it had been intended to be made quickly, cheaply and with quality, the film went over-budget and soon fell behind schedule, with some sequences not fully finished. It was not originally released in cinemas in Japan, but has subsequently been shown cinematically.

Disney never released this film on home media when they had the rights to; like Only Yesterday, it is a coming-of-age story set in a high school. It only very briefly mentions menstruation in one short conversation but this makes it, in Disney's view, entirely unacceptable. In the UK it is rated 'PG' for containing mild violence and scenes of smoking. As of 2020 this remains the only Studio Ghibli film that has never been dubbed in English. It didn't even have an official English title until 2010 and so was often referred to as I Can Hear the Sea, based on the novel's title. Neither ocean waves nor the ability to hear the sea play a part in the film. It remains the shortest film the studio has made, and has a very open-ended conclusion.

As with other Studio Ghibli films, railways play an important symbolic part and are a metaphor for the journey through life; the film is bookended with a scene set in a Tokyo railway station where Taku and Rikako are reunited after years apart. Similarly Taku proves to be a reliable friend because he is seen riding a bicycle: villains never ride bicycles in Ghibli films. He is also shown as working hard both at his studies and in a restaurant.

Released in Japan as Heisei Tanuki Gassen Pompoko, the title refers to Japanese folklore in which tanuki use their bellies as drums to make a 'pompoko' noise. In these myths tanuki do indeed have the ability to change their appearance as well as having super-stretching scrotums. These are very-much visible throughout the film. Curiously Disney, who refused to release Only Yesterday or Ocean Waves because of the brief mentions of menstruation, had no objection to releasing Pom Poko despite this. In the English dubbed version the testicles are never mentioned by name, presumably being a testy topic; instead they are referred to as 'raccoon pouches'. As tanuki are not native to the United States, they are referred to as 'raccoons' in the English dub.

In 2014 Time Out Magazine listed it as the 70th of the World's Top 100 Animated Films as chosen by animators with the words 'one of the weirdest movies ever made'. Think Watership Down (1978) with scrotum. Visually the film is fantastic, particularly the spectre parade which features cameo references to previous Ghibli films, although the story itself does drag in places.

Once again when the film's protagonist accepts the new way of life, he is seen riding on a train which represents his journey through life. A tanuki is also seen riding a bicycle briefly. The film certainly has a very strong environmental message, though the ending is very downbeat as the tanuki's home is bulldozed.

By the mid-1990s Studio Ghibli had well and truly established itself as an exciting studio within Japan, with the turning point almost in sight. For in 1996 Disney would sign a 15-year agreement to release Ghibli's films worldwide. This would, slowly but surely, allow their films to be seen internationally, starting with Princess Mononoke before the end of the century.

1Pronounced 'Jib-Lee'.2The difference as defined by Sir Winston Churchill is that a seaplane has floats to prevent the body of the plane touching the water, whereas a flying boat's fuselage is shaped like the hull of a boat and floats in the water. Confusingly, in America flying boats are known as seaplanes, and seaplanes are known as 'floatplanes'.3There are two main female characters, Gina and Fio, but they do not meet until the very last moment of the film. There are numerous other female characters who talk among themselves in the background while building Porco's aircraft.4Also known as 'raccoon dogs', these members of the fox family have badger or raccoon-like markings.