The Ultimate Studio Ghibli Film Guide: 1995 - 1999 Content from the guide to life, the universe and everything 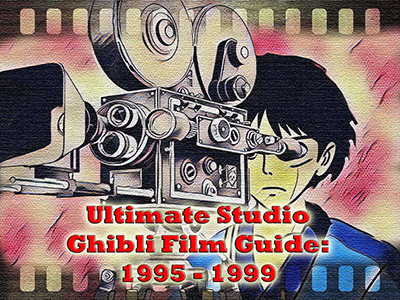 Japan's Studio Ghibli1 animation studio has famously and justifiably risen to worldwide prominence for their superb and unique films. Many of these films were made by the legendary Hayao Miyazaki, although the films made by other directors retain the Studio Ghibli quality and ethos. The studio has also been unafraid of pushing the boundaries in theme, making films on topics that other studios feel are unlikely to attract an audience.

Studio Ghibli films emphasise themes of belonging to and protecting the environment, peace, magic, hard work, wonder, flight, strong and wise elderly women and determined young girls. The spirituality of all living things, as emphasised in Shinto polytheistic beliefs and customs, is particularly significant: all animal and plant life is respected. Other themes include magical castles, which may even walk or fly, travelling on important journeys by train, and the threat of total or nuclear destruction. Military vehicles or locations tend to be horribly beweaponed, bristling with multiple gun turrets, while trustworthy friends ride bicycles. From the 1990s onwards, the idea of transformation also becomes a key theme.

Below is a summary of Studio Ghibli's films during this period. Also mentioned is whether the films pass the Bechdel Test. This can be summarised as whether the film involves two or more named female characters who have a conversation together that is not focused on men. As well as the original Japanese actors who voiced each character, the English actors are also listed.

During the 20th Century Studio Ghibli's films were little seen outside Japan. In 1996 Disney signed a 15-year agreement to release Ghibli's films on home media worldwide, though it took a surprising amount of time for Disney to release these on the home video market in English - few were released before the 21st Century. Even when they were released there were criticisms over whether the translated words were the closest possible match or if elements such as the spirituality of nature were interpreted correctly or watered down, or even filtered out, in order to keep the dialogue matching mouth movements as closely as possible2.

This was Yoshifumi Kondō's only film as director before his sudden death from a ruptured aneurysm in 1998; Miyazaki had hoped that Kondo would replace him and Takahata as the studio's lead director.

The film is set in real locations around the Tama Hills, the area of Tokyo being developed in Pom Poko (1994). A sequel, The Cat Returns (2002), would be Studio Ghibli's 13th film. This would also feature cat Moon aka Muta and The Baron anamorphic statue. The film features the John Denver song 'Country Roads'. This is initially sung by Olivia Newton-John while later Shizuku composes new Japanese lyrics4.

Like many Ghibli films the young sisters are expected to work hard and help out with the housework. The protagonist's life is changed forever after riding on a train, on which she discovers the cat Muta who gets off at her stop, leading her to follow the cat to the antiques shop. As with many Ghibli films the heroine's best friends, both Yuko and Seiji, ride bicycles, thus proving their trustworthiness. As flight is a key concept in Ghibli films, in Shizuku's story the Baron can fly, as do the flying islands that they encounter.

Princess Mononoke is the film that really put Studio Ghibli's foot in the door worldwide, introducing the studio's films to a wider audience. It was briefly the most successful film in Japan until James Cameron's Titanic (1997). Cameron later stated that Princess Mononoke was a key influence on his Avatar (2009). In 2014 Time Out magazine listed it as 28th in the world's Top 100 Animated Films. Yet it very nearly was not made: Miyazaki had already announced his retirement in 2013. After being tempted back to work he was undecided whether to work on his ideas for what became Princess Mononoke, feeling that he had already explored many of the keys themes with Nausicaä of the Valley of the Wind (1984). He was also tempted to make a film, titled Boro, about a caterpillar's epic journey from one tree to a neighbouring tree5. Ghibli's producer Toshio Suzuki convinced Miyazaki to concentrate on Princess Mononoke first on the grounds that it was more complicated and it would be better to make an action-packed film when he still had the energy to do so; there would be time enough to make a more sedate film when he was older. It would also better showcase the studio's capabilities.

'Mononoke' is not a name but roughly translates as 'werewolf' or a supernatural shape-shifting being. San, raised by wolves and, by wearing a wolf skin and mask, is a girl in wolf's clothing. Transformation is once again a key theme, with both gods and humans cursed, and three gods transformed into demons. The importance of the natural order is emphasised; like Nausicaä the central character is a young girl in conflict with a successful female ruler who seeks to destroy a nearby forest, earning the wrath of the godlike animals within who will stampede and attack. Just as Nausicaä ends with the threat of the vast Warrior unleashing nuclear destruction, the decapitated Forest Spirit will turn into a mindless demon the touch of whose shadow brings death.

Once again hard work is shown as being a key component in leading to a successful life – the women of Irontown proudly work the bellows feeding the fire that smelts the iron and the lepers in the town design and create the muskets that Eboshi uses the iron for. When Ashitaka seeks to understand life in Irontown he does so by not only looking around and talking to the people, but undertaking a work shift. Yet the film has sympathetic characters on all sides, with Lady Eboshi having many positive characteristics, particularly the way she cares for those around her despite them being society's outcasts.

In 1996 the Walt Disney Company, through its subsidiary Miramax that specialised in independent films, began releasing Ghibli's films dubbed into English in America. Princess Mononoke was the first film to be made following this deal. Miramax's chairman Harvey Weinstein, however, felt that the film was far too long for American audiences and planned to edit the film down to 90 minutes. On learning this Studio Ghibli sent Weinstein a katana sword engraved with the words 'No Cuts'. Following this gesture the terms of Disney's distribution deal included agreement that Disney would not edit Studio Ghibli's films and the English language versions would be direct translations of the Japanese language that did not change the meaning of what was said. Author Neil Gaiman worked closely on the English translation. Though the film failed to have much impact on original release in US cinemas, it met much greater appreciation in Europe and began to find an audience when released on home video formats6.

When making this film Miyazaki announced he was planning to retire when it was completed, but once again would be tempted out of retirement with another outstanding idea.

Also known as My Neighbors the Yamadas in the United States, this was the penultimate film by Isao Takahata. Quite a departure from Ghibli's style, it was designed to look like a moving watercolour painting and thus was Ghibli's first completely digital animation. Though a hit with critics, audiences were largely unimpressed and it was a box office failure. The lack of central storyline and concentration on moments in the family life, though giving each character their moment to shine, also failed to appeal. The film was based on a comic book series published by Tokuma Shoten Publishing Co, Ltd, Studio Ghibli's parent company that was also owned by Yasuyoshi Tokuma.

Many of the key themes present in other Studio Ghibli films do not occur in My Neighbours the Yamadas. Whereas most films involve characters embarking on a train journey as a symbolic moment during their journey through life, in My Neighbours the Yamadas Takashi Yamada misses his train. Who the Yamada's neighbour is is never revealed, unless it is the narrator. The film is rated PG in the UK – some scenes are unsuitable for younger children and it contains scenes of smoking (including in restaurants).

By the end of the 20th Century the future of the company looked bright. While owned by the Tokuma Shoten publishing company Studio Ghibli continued to inspire audiences in Japan and was on the verge of discovery by the rest of the world following the incredible success of its very next film, Spirited Away.

1Pronounced 'Jib-Lee'.2This is known as the 'Sub or Dub' debate. Subtitles have more freedom to provide more accurate and potentially longer translations of the original dialogue, although some claim this can prove too distracting.3Violin craftsman.4'Concrete roads everywhere I go covering West Tokyo. Chopped down forests, buried the valleys, my home town's down concrete roads.'5This eventually became short film Boro the Caterpillar (2018), which he directed for the Studio Ghibli museum.6When the US DVD release originally planned to contain only the English dub a fan petition called for both the English translation and Japanese language original to be included, with Princess Mononoke a key film in the 'Sub or Dub' debate.