The Ultimate Studio Ghibli Film Guide: 2000 - 2004 Content from the guide to life, the universe and everything 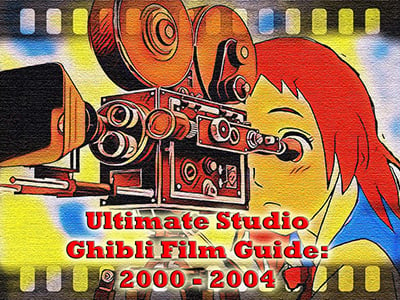 Japan's Studio Ghibli1 animation studio has famously and justifiably risen to worldwide prominence for their superb and unique films. Many of these films were made by the legendary Hayao Miyazaki, although the films made by other directors retain the Studio Ghibli quality and ethos. The studio has also been unafraid of pushing the boundaries in theme, making both lighthearted and harrowing films, as well as covering topics not usually considered likely to attract an audience.

Studio Ghibli films emphasise themes of belonging to one's environment, peace, magic, hard work, wonder, flight, strong and wise elderly women and determined young girls. The spirituality of all living things, as emphasised in Shinto polytheistic beliefs and customs, is particularly significant: all animal and plant life is respected. Other themes include magical castles, which may even walk or fly, travelling on important journeys by train, transformation, and the threat of total or nuclear destruction. Heroines share a magical flying experience with their heroes. Military vehicles or locations tend to be horribly beweaponed, bristling with multiple gun turrets.

Miyazaki is a Europhile, and many of his films have European features, particularly with regard to architecture and aircraft. Art nouveau and vehicles from the 1920s to the 1950s are strong artistic influences.

Studio Ghibli had long been virtually unknown outside Japan. This changed in 1999 with the release of Princess Mononoke (1997) in Europe and the United States following a distribution deal with Walt Disney Pictures. Though Princess Mononoke allowed Studio Ghibli to put its foot in the door and gain international attention, it was the release of their first film of the 21st Century, Spirited Away, that kicked the door wide. Yet this success came at a time of uncertainty: Yasuyoshi Tokuma, the studio's financial founder and head of Tokuma Shoten Publishing Co, Studio Ghibli's parent company, died in September 2000. Following his death different parts of the companies were sold off, making Studio Ghibli's own future uncertain.

Below is a summary of Studio Ghibli's films during this period. Also mentioned is whether the films pass the Bechdel Test. This can be summarised as whether the film involves two or more named female characters who have a conversation together that is not focused on men.

During the 20th Century Studio Ghibli's films were little seen outside Japan. In 1996 Disney signed a 15-year agreement to release Ghibli's films on home media worldwide, though it took a surprising amount of time for Disney to release these films on the home video market in English - few were released before the 21st Century. As well as the original Japanese actors who voiced each character, the English actors are also listed.

Quite simply a masterpiece that became the first and only non-English language film to win the 'Best Animated Film' Oscar. It has also appeared on many critics' lists of the best films of the 21st Century. In fact in 2014 Time Out Magazine listed it as the second of the World's Top 100 Animated Films as chosen by animators, behind only Pinocchio.

The English translation was supervised by Pixar's Chief Creative Officer, John Lasseter, and in return a bouncing lamp, inspired by Pixar's logo, features in the film. The film's story was inspired by a bathhouse that Miyazaki regularly visited when he was young that had a little door he felt must be magical. Many of the buildings in the spirit world inspired by buildings at the Edo-Tokyo Open Air Architectural Museum.

Themes include Chihiro's coming of age, with her discovering her place through hard work - common themes in these films. Once again a train journey plays an important part in the lead character's journey through life, though this time the train is in the spirit world. As Haku is a dragon, Chihiro and Haku share a magical flying journey together – his name means 'soul'. The soot sprites seen in My Neighbour Totoro also appear. Other key themes are greed and pollution: greed transforms Chihiro's parents into pigs and also corrupts No Face, but hard work, thinking of others and purity not only save Chihiro but allow her to save them all in the end. No one can help themselves unless they are also able to help those around them.

A sequel of sorts to Whisper of the Heart (1995), which featured The Baron as a small figurine that inspired the central storytelling schoolgirl to write a story. In this film he is a figurine who can come to life and help others who come to the Cat Bureau. Muta also appears in both films but his appearance changes, particularly colour; in this film he was inspired by a stray cat that had adopted Studio Ghibli as his home.

This film began when Ghibli were asked to create a 20-minute cat-based short film by a Japanese theme park. Aoi Hiiragi, the author of the manga that had inspired Whisper of the Heart, was asked to write another story featuring the Baron. Although the Japanese theme park deal fell through it was decided to proceed with the story and develop it as a 45-minute direct-to-video film as a training exercise for the next generation of directors. After Hiroyuki Morita impressed Ghibli's heads with his storyboard proposals, particularly the believability of main character Haru, it was decided to make the film a full-length animated film to be released in cinemas.

The film features key Ghibli themes, particularly transformation. The heroine also shares a flight with the Baron, descending from a vast height with the help of numerous crows that allow them to walk in the air. The film also has a beautiful idea that anything that people have put their spirit into creating can gain a spirit and life of its own.

Not many animated films feature a 90-year-old woman being the true love of two young men, a prince and a wizard. This film was made as a response to the 2003 Iraq War with Miyazaki determined to make an anti-war statement. As he had retired (again) following Spirited Away, initially another director, Mamoru Hosoda3, had been approached to direct but Hosoda and Studio Ghibli parted directions.

Many of Miyazaki's key themes occur. It is notable that Sophie's home is adjacent to a railway and she indeed rides the rails shortly before her life is transformed forever. Like many Ghibli heroines, she is seen walking in the air and flying with her true love, and like in Laputa: Castle in the Sky, something – in this case a ring given to her by Howl – is able to direct her back to the castle. Like all Miyazaki's heroines, Sophie takes on hard work - particularly cleaning Howl's castle - in order to find her place in the world, although she had been shown as working hard in her hat shop earlier. The film also moves in unexpected directions, particularly regarding the Witch of the Waste who becomes a sympathetic character by the end.

As the film was based on English author Diana Wynne Jones' novel that is set in Wales with Howl himself Welsh, the film has a Welshness about it, yet elements of the fictional land of Ingary are also inspired by Colmar and Riquewihr in France to give a pan-European feel. The film changes several plot elements from the novel, adding the anti-war theme but also removing the novel's revelation that Sophie has an innate magical ability herself. The steam-driven castle walks on legs rather than floating as in the novel, presumably because a floating castle had appeared in Laputa: Castle in the Sky.

A huge success, it became Japan's second-most successful film at the box office behind only Spirited Away. Howl's Moving Castle was nominated for Best Animated Film for the 2006 Oscars, losing to Wallace and Gromit: Curse of the Were-Rabbit.

By the end of 2004 Studio Ghibli had well and truly established themselves on the international stage and were finally achieving the recognition earned for their artistic achievements. The studio was also able to regain a period of stability when in 2005 it was spun-off from Tokuma Shoten Publishing and became its own independent company once more. Though arguably the studio would never again make a film reaching quite the same peak as Spirited Away, the world was now watching and waiting for each new film with great anticipation.

1Pronounced 'Jib-Lee'.2A Japanese character is pronounced 'chi' as part of 'Chihiro' but 'Sen' on its own, which means 'Thousand'. 'Chihiro' means 'Thousand questions'.3Hosoda has since enjoyed great success directing his own films, founded his own animation studio and was Oscar-nominated in 2019.