The Ultimate Studio Ghibli Film Guide: 2005 - 2010 Content from the guide to life, the universe and everything 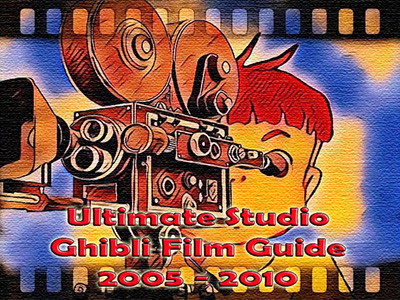 By 2005 Japanese animation company Studio Ghibli1 had truly established itself as being at the forefront of traditional cel-animated magical films, becoming the first studio to win the Best Animated Film Oscar for a film not originally in English for the phenomenal Spirited Away (2001). The studio had been founded by two animators, Hayao Miyazaki and Isao Takahata, alongside producer Toshio Suzuki, with investment from Yasuyoshi Tokuma, head of Tokuma Shoten Publishing Co. Tokuma died in September 2000 and his companies were sold off. In 2005 Studio Ghibli gained its independence with Suzuki becoming the company's first president.

Studio Ghibli films emphasise themes of belonging to one's environment, peace, magic, hard work, wonder, flight, strong and wise elderly women and determined young girls. The spirituality of all living things, as emphasised in Shinto polytheistic beliefs and customs, is particularly significant: all animal and plant life is respected. Other themes include magical castles, which may even walk or fly, travelling on important journeys by train, transformation, and the threat of total or nuclear destruction. Heroines share a magical flying experience with their heroes. Military vehicles or locations tend to be horribly beweaponed, bristling with multiple gun turrets.

Miyazaki is a Europhile, and many of his films have European features. This includes both architecture and aircraft. Art nouveau and vehicles from the 1920s to the 1950s are strong artistic influences.

Studio Ghibli's success was now marked with uncertainty; both Takahata and Miyazaki were growing older and new directors were needed for the studio to continue, yet their previous attempts to inject new blood into the studio had failed to bring longstanding directors. The first film made during this period was directed by a first-time director found surprisingly close to home.

Below is a summary of Studio Ghibli's films during this period. Also mentioned is whether the films pass the Bechdel Test. This can be summarised as whether the film involves two or more named female characters who have a conversation together that does not focus on men. As well as the original Japanese actors who voiced each character, the English actors are also listed.

Earthsea adaptations are like buses; you wait since 1968 for one, then two come along in the mid-2000s. Tales from Earthsea followed 2004's two-part miniseries Wizard of Earthsea2. Author Ursula Le Guin didn't particularly like either. This is unsurprising; Hayao Miyazaki had been trying to persuade her to let him adapt Earthsea for several years and, following the success of Spirited Away, she finally gave permission, only he was busy adapting Howl's Moving Castle so his son Gorō made the film instead. This adaptation was inspired by The Farthest Shore (1972) and the penultimate novel, Tehanu: The Last Book of Earthsea (1990) but deviated widely from the stories and included material from Hayao Miyazaki's graphic novel The Journey of Shuna (1983), particularly the references to widespread famine. Overall the film feels incoherent and is generally considered to be one of Studio Ghibli's weaker entries.

This film was inspired both by Hans Christian Andersen's The Little Mermaid and Disney's adaptation of the story, with strong elements too from Richard Wagner's Die Walküre. Miyazaki was determined to create the most ambitious and stunning purely-traditional animation film ever made, with the film using a reported record of 170,000 drawings. The underwater scenes are particularly stunning. Sosuke's home town was inspired by Tomonoura in Setonaikai National Park, near Hiroshima while Sosuke himself was inspired by Hayao Miyazaki's son Gorō when he was five. Toki, an old women who lives in the care home where Lisa works, was inspired by Miyazaki's mother.

As well as the theme of transformation being key, other Studio Ghibli traits are present, including the importance of valuing elderly women. This can be seen when Lisa leaves her own five-year-old son at home to rescue the elderly vulnerable women who are stranded and isolated in their care home. Both children in this film are seen as hard working and caring, independent and resilient and able to look after others. No-one questions why two five-year-olds are crossing the heavily flooded towns on their own without adult guidance or supervision.

Also known as Arrietty the Borrower and simply Arrietty, this film was the directorial debut of Hiromasa Yonebayashi. As befits a film from a new director, while this film is visually visibly Ghibli, it has a different focus and approach so many of the recurring themes present in Miyazaki and Takahata's films are absent. That said, Arrietty enthusiastically embraces the value of hard work and a tanuki from Pom Poko cameos near the end.

Yonebayashi's next film for Studio Ghibli, 2014's When Marnie Was There, would also transpose a mid-20th Century British children's novel, featuring a convalescing child staying with relatives in the countryside who befriends a magical, mysterious friend, into a story set in 21st-Century Japan.

Unusually there are two English dubs: one by Optimum Releasing, part of StudioCanal, was released in the UK in 2011, and one by Disney was released the following year in the US.

The studio had finally found two new directors who were capable of making films in the Ghibli style while taking the studio in new directions. Both would return to make more films alongside Miyazaki and Takahata in the years ahead.