The Ultimate Studio Ghibli Film Guide: 2011 - 2015 Content from the guide to life, the universe and everything 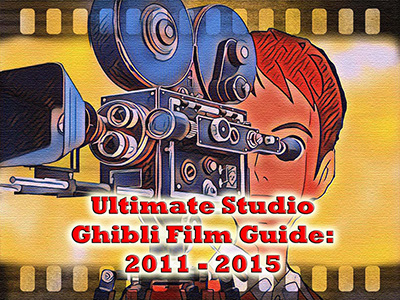 By 2010 Japanese animation studio Studio Ghibli1 had truly established itself as being at the forefront of traditional cel-animated magical films, becoming the first studio to win the Best Animated Film Oscar for a film not originally in English for the phenomenal Spirited Away (2001). The studio had been founded by two animators, Hayao Miyazaki and Isao Takahata, alongside producer Toshio Suzuki. Since 2005 Studio Ghibli had been an independent film studio and their reputation ensured that their films were seen worldwide.

Studio Ghibli films emphasise themes of belonging to one's environment, peace, magic, hard work, wonder, flight, strong and wise elderly women and determined young girls. The spirituality of all living things, as emphasised in Shinto polytheistic beliefs and customs, is particularly significant: all animal and plant life is respected. Heroes use environmentally-friendly methods of transport, travelling on important journeys by train while those who cycle can be relied upon. Other key themes include transformation and heroines often sharing a magical flying experience with their heroes. Recuperation, and taking time to take stock of your place in life, is also vital.

Miyazaki is a Europhile, and many of his films have European features. This includes both architecture and aircraft. Art nouveau and vehicles from the 1920s to the 1950s are strong artistic influences and frequently appear, while novels from that period have been adapted.

Studio Ghibli's success was marked with uncertainty; both Takahata and Miyazaki were growing older and new directors were needed if the studio were to continue. It seemed that they had finally found two new directors who were capable of making films in the Ghibli style, and they both returned to make more films in this period alongside films directed by each of Miyazaki and Takahata.

Below is a summary of Studio Ghibli's films during this period. Also mentioned is whether the films pass the Bechdel Test. This can be summarised as whether the film involves two or more named female characters who have a conversation together that does not focus on men. As well as the original Japanese actors who voiced each character, the English actors are also listed.

A stronger and much more coherent film by Goro Miyazaki than his 2006 debut Tales From Earthsea, featuring the mystery of a father lost during the Korean War who may well prove to be the shared father of the two protagonists. Both main characters go to school at Konan Academy, where presumably they are taught how to be barbarians – the school's plan to demolish a historic building certainly seems barbaric.

The film has several key Ghibli themes. Umi is a hardworking girl who is seen preparing food and washing clothes, and she falls in love with Shun, a boy who is frequently seen riding a bicycle in a trait shared with other Ghibli heroes. Umi's grandmother is particularly wise and the head of the household, showing the importance of elderly women in these films, and Umi's life is improved for the better when she follows her advice. Yet no major moment in the journey through life could take place unless it was accompanied by a corresponding train journey, and naturally enough Umi and Shun declare their love at a train station.

The film takes place near a port, a common location in Ghibli films, with many ships being visible. One in particular carries a plaque labelled 'Ghibli'.

This is a cross between a fictional story based on a 1930s novel combined with the real events that led to the creation of one of the greatest aircraft of the Second World War. Essentially the world events and aircraft are based on real life, yet Jiro's domestic life is all a work of fiction. As the film shows, Japan's 1920s aircraft industry was far behind that of Europe and the USA yet managed to create the War's supreme carrier-based fighter aircraft. While the fact that this aircraft was used to attack and invade other countries, resulting in terrible loss of life, cannot be underestimated, in terms based purely on design it is a masterpiece of engineering3.

The designer obsessed with creating the ultimate aircraft frequently experiences dreams featuring Caproni, the founder of the aircraft company that designed the Caproni Ca.309 Ghibli aircraft that the studio is named after. The Wind Rises contains many of Miyazaki's themes, including trains symbolising key parts of an individual's journey through life: Jiro meets Naoko on a train and ultimately she is last seen catching a train. Tuberculosis is another key theme, with films involving characters recuperating from this disease featuring in The Secret World of Arrietty and When Marnie Was There and it being likely that this is the unknown disease the mother in My Neighbour Totoro was recuperating from.

This film was long held to be Hayao Miyazaki's last and, when completed, was followed by him announcing his retirement (again).

This Oscar-nominated film's visual style was intended to resemble traditional Japanese watercolours. At time of production it was the most expensive Japanese anime film yet made, and is also by far the longest Studio Ghibli film. Sadly it would prove to be Ghibli co-founder Takahata's final film before his death in 2018. The titular character's full name is Nayotake no Kaguya-Hime, which means 'bright and glowing princess from the mountains'. The story is an adaptation of a 10th Century Japanese story titled The Tale of the Bamboo Cutter about a humble, childless bamboo cutter who finds a tiny baby inside a bamboo stalk. The baby grows up to be extraordinarily beautiful and is wooed by all who encounter her before it is revealed that she comes from the Moon. This has been called the first science-fiction story.

This is a haunting mystery that was nominated for the 2015 Best Animated Film Oscar, losing to Pixar's Inside Out. It was based on Joan G Robinson's original novel, which was set in London and the Norfolk Broads and had been nominated for the 1967 Carnegie Medal, losing out to The Owl Service. While some elements seem old-fashioned, such as being sent to the countryside to convalesce for asthma, the haunting tale is open to many interpretations, particularly with regard to what actually happened. During their encounters, was Anna only ever reliving Marnie's best friend Kazuhiko's experiences all along?

Hiromasa Yonebayashi had previously directed The Secret World of Arrietty, based on another mid-20th Century British children's novel, featuring a convalescing child staying with relatives in the countryside who befriends a magical, mysterious friend in a story changed to be set in Japan.

When Marnie Was There was the last Studio Ghibli release before Ghibli went into a 'temporary production break' following the complete retirement of co-founder Hayao Miyazaki. This led to director Hiromasa Yonebayashi and producer Yoshiaki Nishimura leaving Studio Ghibli to establish their own animation company, Studio Ponoc, in 2015. Since then Studio Ghibli has only released one further film to date: the international co-production The Red Turtle (2016). It has announced that Miyazaki came out of retirement (again) to work on How Do You Live?, which was provisionally expected to be released to coincide with the 2020 Japan Olympics.

1Pronounced 'Jib-Lee'.2'Coquelicot' is French for Poppy.3The Mitsubishi Zero was more than a match for early Merlin-engined Spitfires such as the Mark V when dogfighting at low altitudes and low speeds, especially when RAF pilots used tactics that had worked well against the Messerschmitt Bf 109, although Spitfires were faster and better at higher altitudes. Spitfires, however, continued to develop and improve whereas the Zero had already reached the pinnacle of its design.