A Sin by Any Other Name: Robert W Lee Talks About Racism Content from the guide to life, the universe and everything 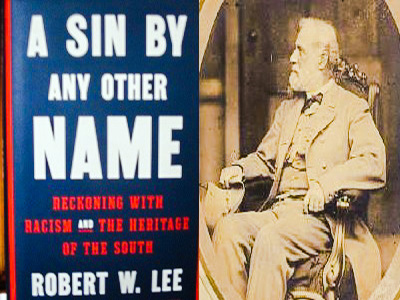 A Sin by Any Other Name: Reckoning with Racism and the Heritage of the South, Robert W Lee, Convergent Books, 2019

The memoir of a spiritual journey is a form with a long tradition. Arthur Dent's 1601 The Plain Man's Pathway to Heaven is one such. Some spiritual memoir writers have gone to great lengths to acquire their insights: in the 14th Century, Julian of Norwich had herself walled up in a church so that she could write about the visions she saw in her near-death experience. Other journeys were fraught with personal danger, such as Corrie ten Boom's harrowing sojourn in Ravensbrück concentration camp. Kurt Gerstein's last act was to record an eyewitness account of the Holocaust and its effect on his spirit. Atheist orator Robert Ingersoll wrote extensively about his opposition to the 19th-Century American religious attitudes that had led to the persecution of his clergyman father.

All of these memoir writers have a theme in common: spiritual journeys are personal, but they can be shared in writing. The writers have experienced a process of alteration in their thinking. Their insights come from the interaction of outside events in their lives with inward reflection and, as they see it, inspiration from a spiritual source. Spiritual memoirists may call this spiritual source by different names: God, the Holy Spirit, the ruach Adonai, the Tao, or the Sophia, to name but a few. The intent of spiritual memoirs is to chronicle personal change, share insights, and encourage others to reflection.

Robert Wright Lee IV's personal journey was coloured by the fact that he grew up as a devout Methodist child in a well-to-do community in the southeastern United States. His respectable family has an unusual legacy: they are descended from Robert E Lee, the leading general of the Confederacy, the Southern side in the US Civil War (1861-1865). Since that war, Robert E Lee has become something of an icon, particularly among people who are prone to regard the past with nostalgia, often based on incomplete information. As late as the 1920s, statues of Lee and other Confederates proliferated in public places throughout the former Confederate states. Even their horses have been commemorated. Rob's discovery that he was related to this famous person was not an unalloyed blessing – it was 'complicated'.

Some in the community said that changing the name [of a school named for Robert E Lee] would be a concession to creeping political correctness, which is usually what people say when they don't want to admit that part of their culture is actually problematic to others.
- A Sin by Any Other Name, p 33

Rob Lee, now a Methodist theologian, considers all this statue-worship to be idolatry, and unchristian. He has said so, on national television. He said so at the 2017 MTV Music Video Awards ceremony in Los Angeles, to tumultuous applause. He returned home to find his parish church in unhappy discussion about their young pastor. To avoid embroiling the congregation in further acrimonious debate, he resigned. He continued teaching in a university, working on his doctorate, and speaking when invited, both on and off television. He also began writing this memoir.

'Never let this be normal, because it isn't normal,' he [Prof Jonathan L Walton of Harvard Divinity School] said. 'You are not normal folks and God is not a normal god.'
- A Sin by Any Other Name, p 150

A Sin by Any Other Name isn't just a diatribe against the sin of racism: it seeks to contextualise the origins of contemporary attitudes. Rob Lee's memoir explores the dilemma of millennials faced with the burden of the historical complications they've inherited. A lot of these complications make little sense to them, but they represent roadblocks to the social progress they personally desire to see in their lifetimes.

By telling his story in memoir form, Lee lets the reader see how he reached the decisions he did. He shares childhood experiences, such as the cognitive dissonance of realising that something was not right about the way the grownups reacted to race, which for a preschooler is a non-issue. This realisation has been a common experience for children in the southern United States since as far back as 1865, but the memoir makes clear that it is still part of life in the 21st Century.

Lee shares other key moments in his understanding of racism, such as the first discussion he had with his father on the topic. The discussion was triggered by an episode of Star Trek: The Next Generation that they watched together. He credits Guinan's remarks in 'The Measure of a Man' (an episode about AI autonomy) with opening his child's eyes to the legacy of slavery1. He maps his own ambivalence from his reaction to a visit to Arlington, his famous ancestor's home, where he bought a picture of Lee and a Confederate flag, to his later decision as part of his religious confirmation to take these items down from his bedroom walls.

The choice and chance for change is now. We can and must be better. People's lives depend on it.
- A Sin by Any Other Name, p 110

Rob Lee has become involved in 'public theology'2. A Sin by Any Other Name is, in a sense, a manifesto of intent for this form of religious ministry. It is also an updating of the idea of the spiritual memoir. Memoirists of the past had to confront the issues of their day: medieval plagues, early-modern religious wars, even mid-20th-Century ethnic hatreds. The 21st-Century spiritual journey has to deal with the legacy of all that, but it has more tools to do it with – not only the legacy tools of scripture and the writings of the past, but also new forms of parable, like those found in science fiction, and new ways of discussing, such as social media.

The aim of advocatory books is to stimulate discussion and drive social change. A Sin by Any Other Name has a thesis: that Christians in the United States can and should be leaders in the drive to root out racism from their daily lives – a goal many share but are uncertain how to accomplish. The book demonstrates the need for this discussion by describing specific contemporary instances of injustice and issues in human thinking. It also describes efforts to confront these issues. For an international reader, this book is a worthwhile aid to understanding US public policy questions. Some may agree with Whoopi Goldberg that it is important to 'share ideas of how we all can do better, as Christians, non-Christians, and as human beings.' She adds, 'I think he may be on to something3.'

1'Guinan' actress Whoopi Goldberg has interviewed him on The View, and provided a quote for the jacket copy of his book. His father, a long-time Star Trek fan, was thrilled.2But what is public theology? For me it is a mode of religious thought, ethical discourse, and expression of opinion on public issues , chiefly those that concern the understanding and resolution of the problems of contemporary society, polity, and economy, the conduct of everyday social life, and the operation of the social, political, and economic institutions in the collective life of people.
- Ausaf Ali, 'An Essay on Public Theology', Islamic Studies 34:1 (1995).3Jacket cover text.