Arthur Dent and 'The Plain Man's Pathway to Heaven' Content from the guide to life, the universe and everything 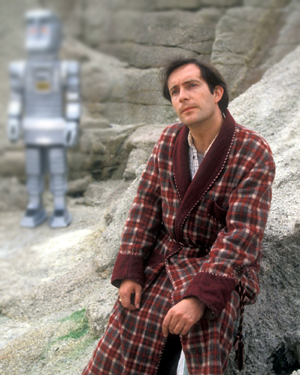 Given the astronomical popularity of Douglas Adams'  The Hitchhikers Guide to the Galaxy series, it is perhaps not surprising that there should be speculation about how the characters in that series came to be named. It seems apparent, based on what is stated in the series, that the name of Ford Prefect, for example, was chosen because it is the name of a car that sounds like it could be a person1. Hotblack Desiato, Adams plainly admitted, was the name of an estate agent in the area he was living in at the time. But for the central character - the famously tea-seeking, bedressing-gowned Arthur Dent - there must be a more complex explanation.

It's a Joke, Surely?

The name of Arthur Dent does sound like it should be a joke, and a really funny one at that, but it's not entirely clear why. Maybe it's because Arthur sounds a little like 'half a' when said in a London accent2. Putting that rendering alongside the surname therefore gives 'half a dent', which is surely impossible. It is no more possible to have half a dent than it is to have half a hole. And since lots of impossible things happen to Arthur, that thought would seem to fit.

That line of thinking becomes even stronger when you add Arthur's daughter - Random Dent - into the mix. Surely all dents are random by their very nature? Not one of them is ever completely intentional. And yet, despite this all tying up nicely, it does leave the feeling that, perhaps, this answer isn't quite clever enough.

So it's an Elaborate and Involved Joke, Then?

There are those that consider it a possibility, mainly because of another book. This is over 400 years old, is called The Plain Man's Pathway to Heaven3, and was written by a Puritan called Arthur Dent. It all seems to fit. The Arthur Dent in the Hitchhikers series is most definitely a plain man, who with the help of Ford, and the Guide itself, manages to find a pathway for himself through the heavens. A confused and meandering pathway, certainly, but a pathway nonetheless.

Who is this Arthur Dent?

Given the time that has passed, it's not surprising that we know little about the real Arthur Dent. We do know, from the Cambridge Alumni records, that we was born in Melton in Leicestershire, and that he attended Christ's College Cambridge from 1571. He was ordained as a priest in 1577 - he was 24 at the time, and so we can work out that he was born in 1553 or thereabouts.

Being ordained, he found a position in a church in South Shoebury4 in 1580. He was married, but we have no record of any children. He was quite a revolutionary as well, in his own way. He refused to wear the surplice and would not make the sign of the cross at baptisms, and so incurred the wrath of senior figures in the church. We also know that he was a committed Christian and Puritan, who desired that all would believe the gospel message, and put their trust in the Lord Jesus Christ. His most famous book was written to this end.

He died of a fever in 1607, and we have a record of his final moments, given to us by one Ezekiel Culverwell:

[H]is life was not more profitable to others, than his death was peaceable to himself: scarcely a groan was heard, though his fever must have been violent, which despatched him in three days. Having made a pithy confession of his faith, 'This faith,' said he, 'have I preached; this faith have I believed in; this faith I do die in; and this faith would I have sealed with my blood, if God had so thought good; and tell my brethren so.' He afterwards said, 'I have fought a good fight, I have finished my course, I have kept the faith; henceforth there is laid up for me the crown of righteousness:'5 and, with his last breath, added, 'I have seen an end of all perfection, but thy law is exceeding broad.'6

And What is This Book?

The front page of the book, which was first published in 1601, declares it to be The Plain Man's Pathway to Heaven; wherein every man may clearly see whether he shall be saved or damned. Set forth dialogue-wise for the better understanding of the simple. Condescending that description may be, but it is fairly accurate too - the book is laid out like a four-handed play, in a way not unlike the original radio scripts of Hitchhikers, though there's no stage directions or reaction to outside events - the book is just four men talking. Well, one man talking to the other three, mostly.

The bulk of the book is taken up by Theologus. Described at the opening of the book as 'a divine', he would be the preacher, and therefore the one who knows, and can explain to others, the way of salvation. Since that is also the purpose of the book, the fact that he occupies most of it is hardly a surprise. His name roughly translates to 'God's preacher', and it would be reasonable to suggest that this is Arthur Dent's Mary-Sue7. The book begins with him and Philagathus passing the time of day together.

The character with the second largest presence is Philagathus: 'An Honest Man' according to the opening of the book. He would seem to be a decent and upstanding man - his name translates as 'lover of the good' - who also knows the way of salvation, but his Bible-knowledge, and ability to preach, is not as great as that of Theologus. His main role in the book is to ask intelligent, thoughtful and supportive questions8 that will give Theologus something else to talk about, and so continue his preaching. Once the other two characters arrive on the scene, it is Philagathus that suggests discussing spiritual matters.

Asunetus is described as 'an ignorant man'. At the start of the book he is travelling, with Antilegon, into town in order to see a man about a cow, which he is thinking of buying. As they come upon Theologus and Philagathus, they decide that they are in no hurry - the cow can wait - and they stop for a chat. Asunetus is not a complete imbecile, but the questions he asks demonstrate that he doesn't know the way of salvation (again the clue is given by the translation of his name - he is 'void of understanding'), and so much of Theologus preaching is directed at him, as he is the one who could be saved. Indeed, by the end of the book he has become convinced, and is ignorant no longer.

Finally, Antilegon is 'a caviller', that is, someone who argues or who raises annoying petty objections. He disagrees with everything that Theologus and Philagathus say throughout the course of the book; hardly surprising, then, that his name translates as 'gainsayer' or 'contradictor'. He therefore rounds out the book as the one that will never be convinced, no matter how much Theologus tries to persuade him. He leaves the book, carrying on into town for that cow, the same as he arrived, with all this religious talk having had no effect on him at all.

These characters could, to some extent, be equated with characters from The Hitchhiker's Guide. Theologus could be the Guide itself, as it has all the answers to any question it is asked. Then Philagathus would be Ford Prefect, helpfully extracting useful information from the Guide for Arthur, who would therefore be Asunetus - he knows nothing about the universe in general, but is slowly informed by the Guide how to survive. Antilegon is, well, a bit difficult to place, actually, as no one quite seems to be the perfect match. But if all this is intentional, then Adams must surely have had someone in mind.

What Does Douglas Say?

Douglas Adams did eventually provide some reasoning for the naming of Arthur Dent in an interview in March 1987:

He went on to explain that one of his schoolmates was called Dent and that 'Arthur Dent' just seemed to have the right ring to it: somebody who reacted to things that happened to him, rather than being an instigator himself.

Adams was told about the real Arthur Dent and The Plain Man's Pathway to Heaven by a researcher into the English literature of the Puritan period:

So this guy [...] assumed – he instantly leapt to the conclusion – that I had deliberately made this extraordinary, involved academic joke. He went through The Plain Man's Pathway to Heaven and teased out all the parallels between the two books, and he sent me this long dissertation on this 'joke' that he discovered I had 'created'. I had to write back and say, 'I'm sorry, I've never heard of this book.'

So there it is. Douglas knew nothing about The Plain Man's Pathway to Heaven. The name Arthur is just a little bit quirky and offbeat, and the surname of Dent pretty much defines his character. That's about the size of the joke, if you can call it that.

But was that schoolboy Dent a distant relation of the old Puritan writer? At this remove, it's unlikely that we'll ever know. But feel free to speculate.

Can I Find Out More?

You can read The Plain Man's Pathway at archive.org.

1Presumably also the reasoning behind the naming of Hillman Hunter in Eoin Colfer's And Another Thing...2In London or Estuary English, both 'Arthur' and 'half a' are pronounced 'arf a'.3That's the modern spelling; it was originally published as The plaine mans path-way to heauen.4A village near Southend.5A quote from the Bible, specifically from 2 Timothy chapter 4 verses 7 and 8.6Another Bible quote, this time from Psalm 119 verse 96.7A Mary-Sue is when an author appears in their own work.8In much the same way as the headings of this Entry.