The Pittsburgh City Directory of 1815: Everything You Never Knew You Wanted to Know Content from the guide to life, the universe and everything 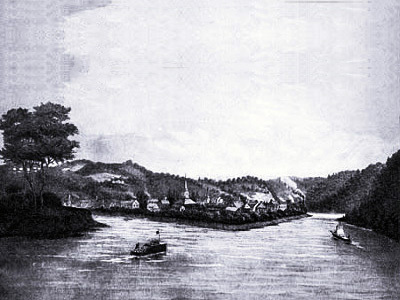 City directories: an historical resource. City directories came before telephone books. They listed the residents of a city, along with its businesses, streets, organisations, and institutions. They served as handy guides for travellers, and factbooks for those with a need to know. For those of us living downstream in the future, they provide insightful glimpses into social and cultural history. They can also make us scratch our heads in bemusement.

Did you know, for instance, that in 1815, it was necessary for US tradespeople to know how to convert currency? Not just foreign currency: currency from other states. This, people, is one of the many fascinating things we can learn from the 1815 city directory for Pittsburgh, Pennsylvania, which is titled The Pittsburgh Directory for 1815: containing the names, professions, and residence of the heads of families and persons in business in the borough of Pittsburgh; with an appendix containing a variety of useful information. So pretend you're interested in life at the Forks of the Ohio and join us for an examination of this short document.

Pittsburgh in 1815: A Brief Overview

In 1815, the year after the War of 1812 officially ended (this will be sort of important later), Pittsburgh was:

In short, Pittsburgh in 1815 was an up-and-coming place.

The Pittsburgh City Directory for 1815 listed heads of household in alphabetical order, along with their professions, and locations, such as 'Jail alley and market', or 'opposite round church'. They were a colourful bunch, these Pittsburghers, who included:

The City Directory really delivers on the 'useful information' front. For instance, we learn that James Madison was President of the United States (we knew that), and that his salary was a whopping $25,000 per annum. John Marshall, Chief Justice of the Supreme Court, got $4,000, and associate justices like Bushrod Washington got $3,500. All the major offices, national and state, are listed, with salaries. We can find out who the sheriffs and prothonotaries were. This is cool stuff.

Here are some other titbits:

Obviously, a city directory was the thing to have when setting out for new frontiers. A handy guidebook for explorers, entrepreneurs and hitchhikers alike. Also useful as a reference for historians and those wishing to write historical novels. We owe a vote of thanks to compiler and land agent James M Riddle, who could be found 'on the south side of 3d, between Market and Wood streets, and nearly opposite the Farmers' and Mechanics' Bank.'

1Previous to US independence, Philadelphia was the second-largest city in the British Empire.2Not to be confused with Robert the Bruce (1274-1329). Also called Robert I, this Bruce was king of Scotland from 1306 until his death. The Reverend Doctor Robert Bruce (1778–1846), who may or may not have been a relative, was also the first Chancellor of the University of Pittsburgh.3'... at which castings of every description, from a cannon to a spider, are extensively and handsomely executed. In connection with the Foundry of Messrs. McClurgs and McKnight, is a mill for boring Cannon.'