How to Make Your Mark in US History: The Hero and the Soundbite Content from the guide to life, the universe and everything 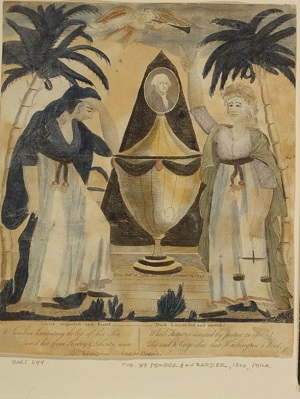 According to the first US census, the new republic had 3.8 million people in it. Whether born in North America or not, these people came from a variety of religious, ethnic and cultural backgrounds. They spoke many different languages. They lived, worked and worshipped in completely different ways. In short, they had very little in common with one another, apart from geography.

With the ratification of the new Constitution on 29 May, 1790, the population along the coast of the North American continent – at least, from Georgia through southern Maine – became officially members, if not citizens, of a new country. This country hadn't come about by accident – it had been made up on purpose by a bunch of rabble-rousers and political utopians. Now, it was up to the folk in the cities, towns, hamlets, farms and wilderness to make up a national culture. They didn't have a lot to work with.

Almost exactly half of this population were under 16. When it came to forging a national identity, this fact represented both a challenge and an opportunity. The challenge lay in the almost total ignorance of history on the part of young people. (At this point, some observers might mutter, 'So what else is new?') The opportunity lay in the possibilities presented by a tabula rasa on the cultural front. (Television advertisers may find this scenario familiar.) The task before propagandists would be to turn recent shared experience into a series of iconic moments that burned into the national consciousness and engendered a sense of belonging, bringing to fruition the promise of e pluribus unum.

Thus arose those twin pillars of the American civil religion: the hero and the soundbite.

Soundbite:   First in war, first in peace, and first in the hearts of his countrymen.
Henry Lee, 1799.

A later historian called George Washington 'the indispensable man'. Washington was indispensable to the scheme of nation-building for two important reasons. The first was his recognised leadership. He was a national figure everyone could rally around. The second reason was the key: Washington's proven ability to relinquish power.

When the American War of Independence ended in 1783, Washington was uniquely situated to pronounce himself king. After all, he commanded a large, victorious army. Instead, the commander-in-chief behaved in a way almost completely unlike, say, Julius Caesar. He made a handsome speech to his troops and... retired. He went back to his Virginia farm. Admiring bystanders compared him to Cincinnatus, a famous old Roman warrior/farmer.

Of course, Washington did not dwell long at Mount Vernon. He was soon called back to Philadelphia, there to preside grumpily over the Continental Congress. He complained about their dilatory attendance and lack of unity. Eventually, a new Constitution had to be framed. Once it was, they needed a President – one who, unlike most leaders before him, would actually go away once his term of office was over. Washington behaved magnificently in that regard. He came, he served, he posed for pictures, and most important, he went home. And remained first in their hearts.

For the next 150 years at least, schoolchildren would be taught that George Washington was the paragon of all virtues. His wife might have contradicted them, but nobody asked her.

Soundbite:   Early to bed and early to rise, makes a man healthy, wealthy and wise.
Poor Richard, aka Benjamin Franklin.

As a writer, Franklin became famous for Poor Richard's Almanack1, which was full of very good advice. This led generation upon generation of schoolchildren to come to the mistaken conclusion that Mr Franklin was a dreary, sententious sort of pedant – rather than the urbane, witty gentleman he really was.

Franklin is probably the only iconic American figure whose real persona was much more interesting than his public image. Rather than the grey eminence of the Revolution, Ben should be regarded as its trickster god.

Women played a significant – if often underappreciated – part in the creation of the new country. Praise should go to the waitresses of Boston and Philadelphia, who passed on intelligence gleaned from loose-lipped British officers in their cups. (They didn't think women understood all that military talk.) Molly Pitcher and Deborah Sampson actually fought in the war. Abigail Adams did a lot of organising, and kept her husband John up-to-date with her letters. But by and large, Early American imaginations were more comfortable with women in a domestic role – such as, say, sewing. So it comes as no surprise that one of the first US heroines was Betsy Ross2. As every schoolchild knows, Betsy Ross made the first US flag. It had 13 stars and 13 stripes.

Ms Ross was a good role model for young women, though. She was a single mother raising a family in difficult times. Ms Ross was widowed twice: her first husband was killed in an explosion when the munitions depot he was guarding blew up. Her second husband died as a prisoner of war. Through all this adversity, Ms Ross kept running her upholstery business on Arch Street in Philadelphia. (The house can be visited today.) She was also a regular church attender: her pew at Christ Church was next to George Washington's.

As a choice for independent contractor in the secret 1776 project to design a new flag, Ms Ross was a no-brainer. After all, she'd made the ruffles on Washington's shirts, and he was an infamous clothes-horse. Also, she was married to his nephew. Nepotism was a hoary tradition, even then.

However, Ms Ross' outstanding contribution to US history lay in design. Washington wanted the stars to be six-pointed. Ross said no, five-pointed. Washington said five-pointed stars were too hard to make. In an historic moment of geometry, Ms Ross demonstrated how to cut a five-pointed star with one snip of the scissors! Thus was the new republic turned from the Mogen David, and future tinfoil-hat conspiracy theorists provided with pentagrams to worry about. Ms Ross, a birthright Quaker, would have laughed at them all. She just thought five-pointed stars were more aesthetically pleasing.

Soundbite:   I regret that I have but one life to give for my country.
Nathan Hale, 1776.

Nathan Hale is the Official Hero of Connecticut. Generations of schoolchildren were taught to revere him for his famous last words. All most of them know is that he was hanged by the British, who were the Bad Guys. But who was Hale, and why was he hanged?

The official story is that Hale was hanged as a spy for sneaking around New York in disguise. General Howe had no patience with this carry-on, and sentenced him to death. He was denied a Bible and a minister, which is usually considered foul play by Americans. Hale was a great and noble hero, end of story

But wait! Even at this late date, new documentary evidence has come to light. In 2000, the Library of Congress acquired a remarkable manuscript: the first-person account of the Revolution in New England by the wonderfully-named Consider Tiffany.

Tiffany was a noted Connecticut curmudgeon, who was kept under house arrest by the locals for 15 months during the conflict. Tiffany was a Loyalist, but it's not clear what they thought he might do, other than harangue everyone to death. Be that as it may, the discovery of this manuscript shed new and surprising light on the Nathan Hale saga.

In 1776, Hale showed up on Long Island, where he stuck out like a sore thumb. For one thing, he was rather tall. For another, he had identifying facial scars from a gunpowder explosion. (Exploding gunpowder appears to be a theme in this war.) Finally, his cousin was a noted Tory, and worked for General Howe, the local commander.

To make it worse, Hale had no spy training. There was no Q to teach him about secret writing. He was given no codes. This was not because the Americans didn't use things like that. They did. But somehow, they all seemed to think sending a novice out to spy on the British was a good idea. It wasn't.

According to Consider Tiffany, Hale had the bad luck to run into a real spy – Colonel Rogers, described by a fellow-soldier as 'subtil & deep as hell itself'. Rogers was a Connecticut Yankee frontiersman and scam artist who worked for the British. He suspected Hale from the start. Pretending friendship and a fondness for the Continentals, Rogers plied Hale with drink, and confirmed his suspicions. Hale was obviously a spy, though not a very good one.

But Rogers needed more intel, and more evidence for the court martial. So, the wily agent convinced the overeager amateur that the two of them could organise an anti-British spy ring right there on Long Island. Say, tomorrow. Then Rogers arranged a meeting with 'prospects' on the next day. When Hale showed up, he spilled the whole plan to the assembled witnesses – who promptly arrested him. It was an operation worthy of James Bond.

Why has it taken over 200 years for this story to be told? Think about it. Just how embarrassing do you think it would be to tell the schoolkids that America's first spy was a gullible bumbler? Why, they might begin to suspect the FBI, CIA, NSA and Department of Homeland Security of incompetence...

So What Have We and the Children Learned?

Creating a shared narrative in the Early American Republic was not an easy task. To pull it off, writers and educators marshaled the shining examples of heroes and heroines of the Revolution, in the same way that ancient Romans taught their offspring to emulate the bravery of Horatius at the bridge. They adapted from veterans of the conflict those fireside tales which they chose to 'remember, with advantages', and turned them to didactic use. Even if they had to stretch the truth a bit to make it fit the moral.

Image courtesy of the Library of Congress
1Read this edifying volume at your leisure.2We are referring here to the Philadelphia businesswoman, and not to Betsy Ross, the First Lady of the Cherokee Nation.3No, William Franklin was not the cross-dressing governor. That was Lord Cornbury.4'We are poor little lambs who have lost our way, baa, baa, baa...'