Blockbuster Live-Action Science Fiction: A Yankee Circus on Mars Content from the guide to life, the universe and everything 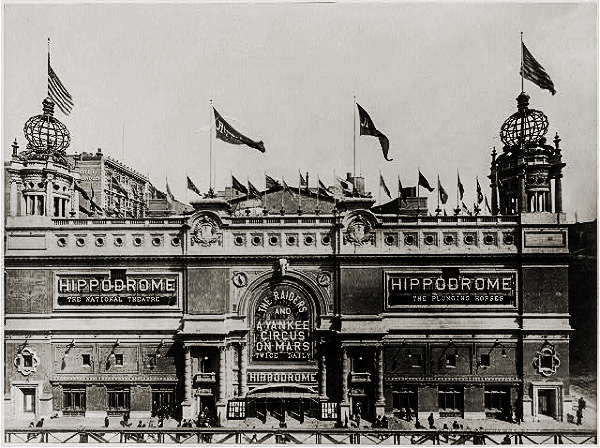 ...that colossal musical comedy, A Yankee Circus on Mars, and the military water-spectacle, 'The Raiders,' drew more than five thousand people a night into the big auditorium, so the same bill will be continued through the autumn.
- Munsey's Magazine, vol 33, p 626, 1905 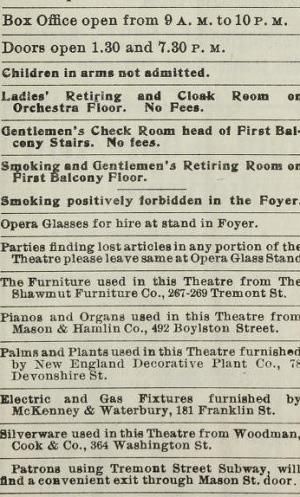 What did people do for fun before there was television and the internet? How could they possibly entertain themselves without a DVD player? In bustling New York City in the modern year of 1905, they could go to the Hippodrome. That new palace of spectacle could accommodate 5,300, far more than the paltry 3,000-seat capacity of the Metropolitan Opera. At affordable prices, too: seats in the low-end 'Family Circle' cost a mere 25 cents, the price of a man's haircut (with shave). Instead of boring, high-toned 'long-hair' music, you saw blockbuster entertainment. No yawn-worthy CGI, either: this stuff was all live-action, with a cast of up to a thousand on a stage 12 times larger than any on Broadway. When the Hippodrome announced 'spectacle', they meant it. And the opening show was... science fiction!

The show that inaugurated this amazing addition to New York City's artistic panoply was good value for money – a whopping four hours long. The first part – the one we're going to tell you about – was a space-travel extravaganza called A Yankee Circus on Mars. We'll let that sink in. If you hadn't had enough excitement yet, you could hang around for the second show, which involved a re-enactment of a US Civil War battle, the Union raid on the Confederate prison camp at Andersonville, complete with horses and a water hazard. Yes, they had a giant water tank. It could be moved around. But let's go back to the science fiction part. We've got our programme in front of us1, and this is going to be fun.

A Yankee Circus on Mars 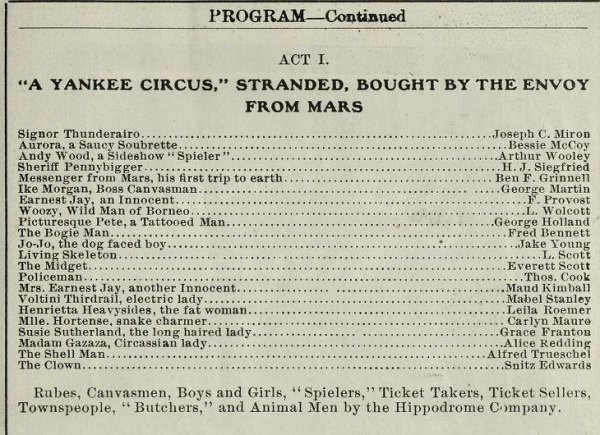 There were a lot of actors involved in this production. Also dancers, singers, circus acts, and trained animals. Coco the baboon was a big hit in it. There were 60 musicians in the orchestra. The ballet included the 'Dance of the Hours2'.

But what was the plot about? We hear you ask. Why? You've never asked that about Star Wars. Well, okay. Here's the plot, from the helpful programme notes:

It's a lot to take in: the failing circus, rescue from outer space, the amazingly hip Martians, the elephants driving cars (we'll get to them), etc. A bit of background might help. By 1905, two mass migrations were in full swing in the United States, and they both came together in big cities. First, there were the waves of immigrants coming mostly from Europe. They were eager to assimilate and 'get ahead' in the world. In the cities, they met a lot of internal immigrants: economic refugees from the countryside, which was rapidly denuding itself of young people. Farming, which had always been the occupation of the overwhelming majority of North Americans, was on the decline due to the growth of agribusiness. Farmers' children were growing up and heading to town to earn more money.

This migration caused a cultural divide in the country, not regionally, but between town and country. Which goes a long way to explain the 'Yankee Circus'. People in rural Vermont? Hicks3 from the sticks4, as the saying went. A popular song from 1906 called 'Only Forty-Five Minutes from Broadway', from George M Cohan's musical of the same name, sums it up nicely.

Only forty-five minutes from Broadway
Think of the changes it brings
For the short time it takes
What a diff'rence it makes
In the ways of the people and things
Oh, what a fine bunch of rubens5...

In contrast to the 'rubens' of Vermont, who closed down the circus, the culturally-advanced Martians know how to appreciate a good show, just like the sophisticated New Yorkers. Let the revels begin! 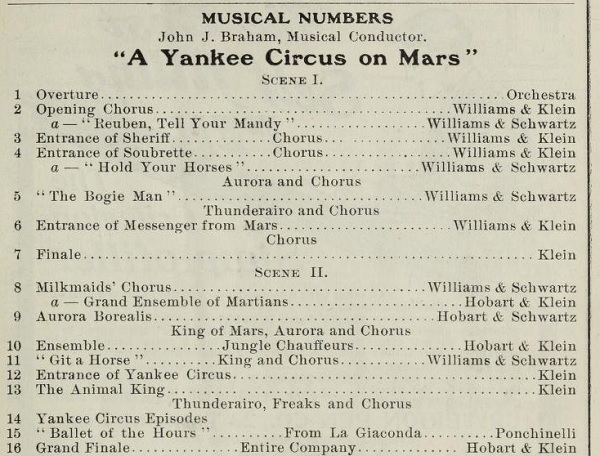 Music was popular in 1905. The emphasis was on live performance. The composer for A Yankee Circus on Mars was the talented Jean Schwartz (1878-1956). Schwartz was born in Budapest, but emigrated with his family in 1888. Schwartz started his professional life as a Coney Island pianist, then moved up to music demonstrator at a department store. A music demonstrator played the sheet music for you before you bought it. The better the pianist, the more sheet music got sold. Then he became a 'song plugger'. Song pluggers went around with singers and created flash mobs wherever people were gathered. (Admit it: you thought flash mobs came in with mobiles.) They'd sing the songs so many times that people got them stuck in their heads and bought the sheet music. In the days before Top 40 radio, this was a very effective sales technique. Finally, Schwartz began selling songs to Tin Pan Alley, the hugely successful sheet music industry on West 28th Street. In addition to this musical, Schwartz wrote at least a hundred hit songs. One of them, 'Rockabye Your Baby with a Dixie Melody6', became a signature song for the famous Al Jolson. Composing a really big show like A Yankee Circus was definitely a career milestone for this musician.

Bring on the Elephants! 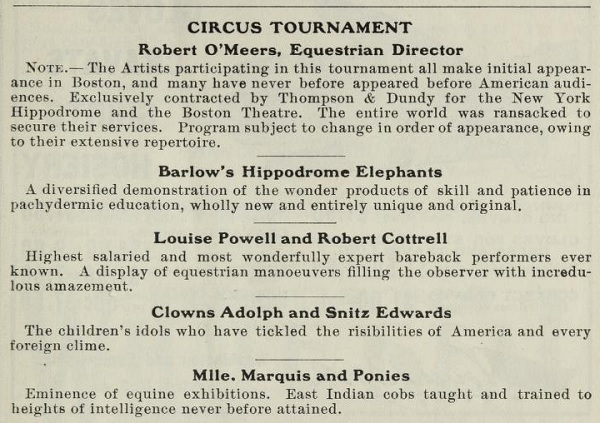 The matinee started at 2pm, and the evening performances at 8pm. The players must have been exhausted by midnight. The animals probably were, too. The word 'hippodrome' comes from the Greek for 'horse+racecourse'. A Yankee Circus had trick riders, so it also had horses. The elephants drove cars, because they were on Mars. It would be more than 50 years before NASA came along to spoil their plausibility. In addition to the 'pachydermic education' that went into the show, the producers really wanted the audience to appreciate the sheer effort of it all. 'The entire world was ransacked to secure' the services of all this top-flight talent.

In reality, inspiration for this show had originally come from a newspaper item about a real circus. That circus had landed in financial hot water somewhere in the sticks of New England, and its effects had had to be sold at auction. Whether any of those performers ended up at the Hippodrome is not clear, but it would have been fitting revenge on the rubens.

Hitler is dead and Liveright's gone out of business
The Attic of the Past and Everlasting Minute are out of print
- Allen Ginsberg of New York, 'To Aunt Rose'

The Hippodrome building was torn down in 1939. In 1952, an office building and parking garage went up on the site, called 'The Hippodrome Center'. Such is life in New York, the city where the bulldozer never sleeps. But it was fun while it lasted.

1This programme is from the road-show version in Boston.2A sure sign of the decline of Western civilisation is the fact that you probably won't recognise this music until we whisper in your ear, 'Hello, Mudda, Hello, Fadda' or remind you of the terpsichorean hippos in Fantasia.3Hicks=ignorant, unsophisticated, 'backward' rural people. See below for synonyms. The opposite of froods, who know where their towels are.4Remote rural locations where they 'rolled up the sidewalks' at sundown.5Rubens or Reubens, also 'rubes'=ignorant farmers, hicks. From the old song 'Reuben and Rachel'.6Not only was the composer of this ditty a New Yorker, but the lyricists were, too. This might explain the bogus geography:

Just hang my cradle, Mammy mine
Right on that Mason-Dixon Line
And swing it from Virginia
To Tennessee with all the love that's in ya

The Mason-Dixon Line runs between Delaware and Maryland.7The Latin phrase 'Ubi sunt?' was a rhetorical meme that was popular in the Middle Ages. It means 'where are?', implying 'What happened to the good old days?'