The Layout of a Traditional Opera House Content from the guide to life, the universe and everything 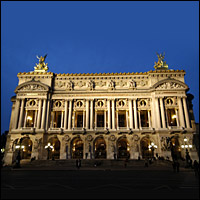 What makes a building an opera house? It must have a large stage with full facilities for the use of extensive scenery and a pit large enough for a full-sized orchestra. The combination of fully-equipped stage and large pit is essential for classical ballet as well as opera performances, and most opera houses are now home to both opera and ballet companies1. However, many features of a traditional opera house have other origins. The importance of boxes, for example, arose from the historic position of the opera house as a social meeting place for the aristocracy.

The Stage and Backstage

Above the stage, the tall fly tower allows scenery to be completely raised, using a combination of counter-weights and pulleys. The combination of manpower and stage machinery allows a traditional opera house to produce a surprising range of special effects: one grand opera of the 1820s went so far as to have Vesuvius erupting on stage. The area behind the stage is usually a warren containing dressing-rooms, rehearsal rooms, storage rooms and workshops. The legendary feuds carried on here rarely affect the front of the house. The stage door, however, is often a magnet for fanatical opera-goers, who lie in wait for their favourite singers after every performance.

This is the space for the orchestra, which nowadays may contain over a hundred musicians. It sometimes extends quite a distance under the stage. If the work performed is in an exotic style, or by a modern composer, the array of instruments may be as interesting as what is happening on stage.

In a traditional opera house, this is normally U-shaped, with the length of the sides determining the audience capacity. The ground floor seats are usually called the 'stalls'2. The arrangement of balconies can be:

Sometimes known as the Parterre, or orchestra stalls, these seats have the closest clear view of the stage. The larger the opera house, the more noticeable this advantage, so they are usually among the most expensive seats. Depending on the acoustics of the building, the sound may be less well-balanced, especially for those sitting close to the brass section of the orchestra.

A box is a balcony section divided by partitions from the neighbouring boxes, with a separate door, furnished with moveable chairs and stools rather than fixed seating. Historically, subscribers often either owned the box or could reserve it for the full opera season. The number and arrangement of the boxes reflects the early importance of the 'high society' aspect of the opera house.

The Social Advantages of a Box at the Opera

The Royal or Imperial Box

In an opera house with full tiers of boxes, such as the Vienna State Opera, there is sometimes a particularly ornate and important box at the middle of the lowest tier, providing the best sightlines to the stage. This usually became the Royal (or Imperial) Box, reserved for the ruling family and their friends.

It is typical of the more half-hearted approach in England to both opera and to the Royal Family that the Royal Box in Covent Garden is at the side of the auditorium, with a skewed and inferior view of the stage. By sacrificing the best view, however, this Royal Box has the advantage of a private entrance and separate toilet facilities, which on balance is probably a better deal than the more ostentatious Imperial Boxes of the Tsars and Kaisers.

The Practical Disadvantages of Opera Boxes

These galleries are variously known as the Grand Tier, Grand Circle, Circle or Upper Circle. While the seats may be far from the stage in a large house, the combination of good acoustics and good sightlines often makes them the ideal position. They have a far larger seating capacity than an equivalent tier of boxes. For this reason, modern opera houses usually have galleries and no boxes at all.

These galleries may be called the Amphitheatre, 'The Gods', the balcony or, in colloquial terms, 'the nosebleeds'. Once the place for the footmen accompanying the denizens of the boxes, these galleries have an almost vertical view of the stage and are rarely suitable for those who suffer from vertigo. The social distinction between these galleries and the more expensive areas is often rubbed in by the management's insistence that people use a side entrance and plain stairway to reach them.

The main compensation for the more spartan conditions is that the audience here is generally more knowledgeable than that in the boxes. The applause of these galleries is often the best measure of the real quality of the performance.

Historically, the upper galleries were usually the home of the dreaded 'claque'. This was an organised group of regular patrons who would applaud or boo to order, and who often managed to extort large sums from intimidated singers trying to ensure a good reception.

In the second half of the 20th Century, a number of new opera houses were built, including the Metropolitan Opera House at Lincoln Center in New York and the Opéra Bastille in Paris. The increased audience comfort and shiny new machinery encouraged the managements of many older opera houses to plan major renovations.

The possibilities for backstage improvements are limited by the floorspace available for extensions and the overall budget. A new stage may be built with 'wagons' or 'trains': large sections of floor which can be moved in and out of the stage area, carrying scenery with them. Giant acoustic barriers can allow rehearsals to be carried on in the adjoining area while work goes on onstage. Sound-proofed rooms allow singers to go through the necessary warm-up exercises in comfort. Closed-circuit televisions give the singers a view of the conductor no matter where they are positioned on the stage; if extended throughout the backstage regions, the television network can allow both the cast and stagehands to watch for their cues.

While lighting systems have got more and more complex, one thing that is not used in a traditional opera house is any large-scale sound system. Opera singers depend on their natural voices, without amplification, so any microphones to be seen are normally for radio or television broadcasts. No matter how much room is available on the site, both workshop and warehouse facilities are likely to be at a distance, with a fleet of lorries bringing scenery to and fro in an impressive display of logistics3.

Artistically, the main modern improvement in the auditorium is the addition of screens for surtitles, so that the audience can now actually follow what is going on. Most opera houses have a surtitle screen above the stage. The deluxe system has a little individual screen for every seat: of course, in a fit of oneupmanship, most dedicated opera-goers will turn this off, showing that they don't need to depend on translations.

Since summer heat could make conditions unbearable, the traditional opera season went from September (or October) to May. The addition of efficient air conditioning allows the house to be used all year round. A revamped auditorium usually gives more legroom, while, to probably half the audience, the crowning jewel of a renovation programme is likely to be the provision of enough ladies' loos.

The Historic Fire and Other Disasters

In the past, the use of candles, oil lamps and gas lighting meant that fire was always a danger, and most older opera houses have been destroyed by fire at least once. La Fenice ('The Phoenix') in Venice is actually called that because it 'rose from the ashes' of a previous building. Other opera houses, including La Scala, Vienna and Dresden, were badly damaged by allied bombing in the Second World War. More recently, substandard wiring, electrical faults and dodgy contractors have become a problem, as was the case in the fire which destroyed La Fenice (again) in 1996.

The more grandiose opera houses often have impressive public rooms at the front of the house, providing space for people to mix at the intervals. The really ornate salons can be recognised by names such as Salon Doré and can be worth a visit in themselves. Nowadays these salons may be used for chamber music concerts.

The ornate decoration of a traditional opera house is usually completed by the presence of a glittering giant chandelier suspended over the middle of the auditorium. The chandelier of the Palais Garnier in Paris is said to weigh eight tonnes. Young children and bored members of the audience may spend long periods of time calculating what damage would ensue if the chandelier just happened to fall down4.

Bars and lobby areas can range from plush and luxurious in the stalls and main tiers, to spartan in the top galleries. Reluctant opera-goers may find that a drink in the bar at the interval is the one thing that makes their evening bearable.

1Some old opera houses, like the Belfast Grand Opera House, retain the name but are now in use as general theatres.2Or the 'orchestra' in the United States.3The renovated Royal Opera House in Covent Garden even has a giant lift which can take a full articulated lorry to stage level for easy unloading.4This possibility naturally features in Andrew Lloyd Webber's musical The Phantom of the Opera, which is essential viewing for anyone with an interest in opera houses.