'Streets': A Memoir by Bella Cohen Spewack, Author of 'Kiss Me, Kate' Content from the guide to life, the universe and everything 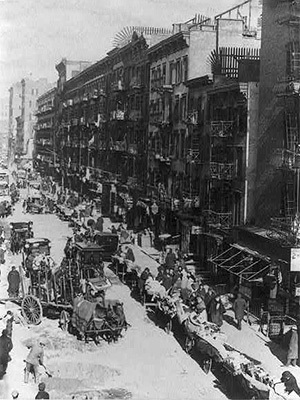 Bella Cohen Spewack (1899-1990) isn't a household name. But the things this witty New Yorker wrote may be very familiar. Have you ever heard the phrase 'Boy meets girl' as a plot summary? That comes from a line in a play she co-wrote with her husband, Samuel Spewack. Bella and Sam wrote other plays and screenplays, too: ever heard of the Cary Grant film My Favourite Wife? They were nominated for an Academy Award for that one. Their most famous work was the Shakespeare-inspired musical Kiss Me, Kate, with music by Cole Porter. Bella excelled at screwball comedy and penned wry lines like this:

The studio has fired you. You have the worst temper in show biz. You bit King Kong and gave him rabies!

Bella Spewack was also a good businesswoman. If you've ever bought a box of Girl Scout Cookies, you have Bella Spewack to thank - she was the press agent who came up with the idea. As a journalist, she broke the story of Anna Anderson, who claimed to be the Romanov princess Anastasia.

If this brief resumé leads you to assume that Bella Cohen Spewack sailed through life on a sea of urban privilege and carefree circumstance, you would be very, very wrong. The woman who riffed so effortlessly on Shakespeare was born in Romania1 and grew up in breathtaking poverty on New York City's crowded Lower East Side. Her childhood reads more like Brecht than Noel Coward. This is probably why her memoir Streets, which she wrote at the age of 23, wasn't published until after her death. It's an unblinking and vivid look at a childhood filled with deprivation, suffering, and violence – and it makes riveting reading.

Life in the Streets of New York

In the summer, the street talked on its stoops2. In the winter, it talked in hallways and more briefly in airshafts. It rarely whispered. That was not the way of the Street.
- Bella Spewack, Streets, p66

One of the main characters of Bella Spewack's memoir is the Lower East Side itself: streets crowded with houses and tenements. A tenement was a wooden structure, usually jerry-built, erected next to or behind a more stable building. Tenements had few amenities, were firetraps, and were rented out to the desperately poor. Around the time Bella Cohen and her mother arrived in New York City, two-thirds of its people, about 2.3 million people, lived in these 80,000 tenements. It wasn't an easy existence. A family would rent a three-room apartment and, if they were lucky, a toilet they didn't have to share. In turn, they would take in 'boarders' who paid them rent (if they could collect it). Boarders slept everywhere: in the living room, in the kitchen, under the staircase.

Children who grew up in this environment learned a lot about human behaviour at a very young age. Sometimes, what they learned made them fearful. In Bella Cohen's case, it made her determined to make a better life for herself, her mother, and her baby brothers. It also encouraged her to cultivate her mind.

I was now twelve and acutely conscious of the sordidness of the life about me. To escape, I hid behind my books and built up a life of my own... My mother and the boarder with whom she was in love did not exist for me as vividly as did Queen Guinevere or my piano teacher with her long neck and her long fingers.

Bella fought to stay in school. While most of the children of her generation ended their education at 13, and found jobs – low-paying, and with long hours – to support their families, Bella insisted on attending high school. Her mother backed her decision, but they had to fight the charity organisations, who frequently threatened to withdraw their support unless every able-bodied member of the family was working. Bella worked on Sundays. She sat up nights sewing with her mother. In the summer, she travelled to a resort or boarding school to work as a maid, kitchen helper, or waitress – sometimes all three. Whatever she earned went to help the family.

At midnight, I opened my eyes with an effort. There, on the window ledge, sat three rats, as large as week-old kittens, regarding us in the bed with excited squeaks.
- p83

Life in the slums was a day-to-day fight against poverty, dirt, and disease. The overcrowding meant that people lived in what Bella called 'tumultuous uneventfulness.' Her mother, abandoned as a young wife in Romania, remarried when Bella was 12, and had two more children. Her second husband, a shiftless boarder, left one day and never returned. The mother and children endured, moving from one scary, filthy tenement to another.

Bella and her mother made friends with people as poor and hardship-ridden as themselves. There was laughter as well as tears. Bella and her young female friends occasionally ventured into strange territory, taking the streetcars as far up Manhattan as 96th Street once to visit a beloved teacher from the settlement house3. 96th Street and its luxuries seemed like another country to them. They explored a department store: their discovery of an escalator led to delight and rides that only ended when a floorwalker threw the young riff-raff out.

To widen her horizons, Bella took piano lessons at the settlement house. She haunted the public library. To get more books, she decided to walk another two miles and get a second card so that she could borrow from another branch library. When the duplication was discovered, she received a letter explaining that this wasn't allowed. She and her friend couldn't stop giggling when the letter began, 'Dear Madam'. Bella's journey into the world was made in tiny steps of learning.

The memoir ends with the same bittersweet combination of small victories in the midst of heartbreak as the rest of the book. At 16, graduated and beginning to make money as a journalist, Bella rushes home with her newfound, modest wealth, only to find her brother Hershey dying of a malady that no one can understand or cure.

A World Gone By

It was all so hopeless. When would it all end? I began to drowse and dreamed consciously – that a vast fire destroyed the slums but no one was hurt. Everybody went to the country and there were no more slums.
- p104

A vast fire didn't destroy the slums, but even as Bella Cohen Spewack was writing her memoir in 1922, 'urban renewal' was causing some of the streets to disappear forever. Tenements were being torn down. One of the worst streets where the Cohens had lived, in an area called Dead End, was being gentrified. The process wasn't completed until after the Second World War, when the United Nations buildings were constructed there. New York's streets are an ever-changing configuration.

Bella earned her way uptown – and around the world, including lengthy work stays in Moscow and Berlin – with the same felicity of phrase as marks Streets.

...when the heat was such that men and cats exchanged pitying glances...

...when it was so hot that even the workmen on the boats forgot to swear...

As usual, I had a book before my eyes. To my mother, that was proof enough that my ears were not functioning.

In this book, you will find much that is strange. You will learn about a world in which children played a game called 'Did you find a rat in your milk today?', and where abandoned women resorted to 'mimetic magic' to fetch their wandering husbands home. You will also find a world that is familiar: where young people court, and lonely men entertain children with fairy tales, and the poor work hard to make a living. Streets is well worth your time. There are lessons to be learned here about the past, but also about the present. You may find yourself looking around you and wondering where the Bellas of today are, and what you could do to help them.

Streets can be purchased in hardcover, paperback, or Kindle edition. You can look for it at your public library. Or you can get on the waiting list at Internet Archive.

Would you like to see a recreation of what the Streets looked like in Bella Cohen's day? The film Hester Street is Joan Micklin Silver's loving recreation of life on the Lower East Side, based on the 1896 novel Yekl: A Tale of the New York Ghetto by Abraham Cahan. A good deal of the film is in Yiddish, Bella Cohen Spewack's native language. But you can read the subtitles.

Streets was first published in serial form in the magazine of the Lower East Side Tenement Museum. Yes, there's a museum. They give guided tours. If you're in New York City, tear yourself away from the glittering skyscrapers and go find out how the other half lived.

1Some sources claim Bella Cohen was born in Bucharest, others in Transylvania. 2A stoop is a set of steps leading from the sidewalk to the front door. In New York City, the word 'stoop' is a leftover from the vocabulary of the original inhabitants, who were Dutch. Groups of neighbours sitting and gossiping on a stoop were a common sight.3A settlement house provided educational, recreational, cultural, and social services to the poor in the inner city. Pioneer social worker Jane Addams built the most famous settlement house, Hull House, in Chicago.