Jane Addams and the Devil Baby: Fake News, 1913 Style Content from the guide to life, the universe and everything 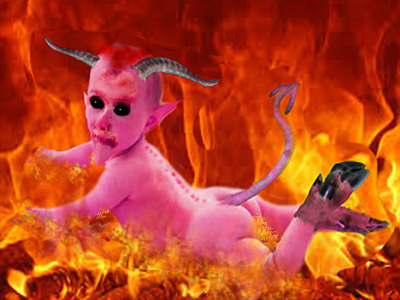 Reader Warning: This isn't one of those jolly hoax tales where we get to laugh at people of the past for being gullible. This story is a bit more serious than that.

Fake news isn't new. It's as old as human history itself. Rumour-mongering is an art so ancient, it probably goes back at least to the Neolithic. How false stories get started, and what they mean to those who pass them around, varies from time to time and place to place. Here's one from 1913, that played out in Chicago. It concerns an evil 'Devil Baby', that shows up when the parents have sinned. The story wouldn't have reached us today, except for the fact that this version involved a famous person. We'll rely on Jane Addams to tell us what it means.

You may not have heard of Jane Addams, the peace activist, social worker and philosopher. But she would surely be found in a list of the 100 most influential people of the 20th Century. Addams won the Nobel Peace Prize in 1931. Hull House was a pioneering institution that made a significant difference in the lives of women and children in the inner city. Addams' influence spread far beyond Chicago: she was a major force in feminism, a charter member of the NAACP1 and a persuasive writer. She has a bronze plaque on San Francisco's Rainbow Honor Walk as an LGBT heroine.

People listened to what Jane Addams had to say. So when she addressed the issue of the Devil Baby, her words had authority. But why was she talking about an urban legend in the first place?

Jane Addams and her life partner, Ellen Gates Starr, founded Hull House in 1889. By 1912, the 'settlement house' had grown to 13 buildings and a summer camp, which they called a country club. The settlement house idea is a bit hard to explain to modern readers: these upper-class, educated women formed a community in the middle of immigrant poverty in Chicago's Near West Side. But they weren't into gentrification. Instead, they offered recreation and education to their neighbours, particularly women and children. The women in the settlement house programme were working toward the Progressive goal of community 'uplift2' by sharing what they knew. They helped thousands of poor women and their children learn useful skills – but they also offered cultural opportunities, on the grounds that financial status shouldn't limit access to the arts. They were pretty forward-thinking, these women.

Jane Addams did a lot of research, too. When people came to visit her, she gave them cups of tea and listened. A lot of what she learned became the basis for new programmes to help her constituency. Addams also wrote books about what she found out. By reading these books, we, too, can learn what life was like in turn-of-the-last-century Chicago. Some of what Jane Addams experienced will shock you.

One of them related her habit of going through the pockets of her drunken son every pay-day, and complained that she had never got so little as the night before, only twenty-five cents out of fifteen dollars he had promised for the rent long overdue. 'I had to get that as he lay in the alley before the door; I couldn't pull him in, and the copper who helped him home left as soon as he heard me coming and pretended he didn't see me. I have no food in the house nor coffee to sober him up with. I know perfectly well that you will ask me to eat something here, but if I can't carry it home, I won't take a bite nor a sup.'
- Jane Addams, 'The Devil Baby at Hull House', reprinted in Atlantic Classics, Second Series.

Jane Addams heard a lot worse stories than that. The poverty, suffering, ignorance and insane behaviour around her should have been overwhelming. The situation would make anyone angry and bitter. But Addams and her co-workers kept plugging away in Chicago. They made a difference.

Jane Addams and the Devil Baby

How did the Devil Baby fit in? We'll let Jane Addams tell it.

The knowledge of the existence of the Devil Baby burst upon the residents of Hull-House one day when three Italian women, with an excited rush through the door, demanded that he be shown them. No amount of denial convinced them that he was not there, for they knew exactly what he was like, with his cloven hoofs, his pointed ears and diminutive tail; moreover, the Devil Baby had been able to speak as soon as he was born and was most shockingly profane.
- Jane Addams, 'The Devil Baby at Hull House', reprinted in Atlantic Classics, Second Series.

For about six weeks, the workers at Hull House were plagued by visitations from all sorts of women who insisted that they knew all about the Devil Baby – they'd heard it from So-and-So – and they weren't leaving until they saw it with their own eyes. Of course the Devil Baby was at Hull House, where else would someone take it? They were the only people kind enough, and broad-minded enough, to take in a Devil Baby. One elderly Irish grandmother rose from what was practically her deathbed in the poor house3, made her way with difficulty across town, and adamantly refused to leave until 'Herself' (meaning Jane Addams) talked to her. What did Jane Addams do? Gave the woman tea, and listened to her personal story.

Was there a Devil Baby at Hull House? Of course not. But as the weeks wore on, Jane Addams began to be almost sorry there wasn't.

...I was assailed by a veritable temptation to give her a full description of the Devil Baby, which by this time I knew so accurately (for with a hundred variations to select from I could have made a monstrous infant almost worthy of his name), and also to refrain from putting too much stress on the fact that he had never been really and truly at Hull House.
- Jane Addams, The Long Road of Woman's Memory, p.16.

But who was this Devil Baby?

The Devil Baby was an urban legend. The basic story went like this: a husband sinned in some way. He cursed God or ran around with strange women, or had committed a terrible crime that he never confessed. Or an unmarried girl was seduced by a random stranger she met at a dance. Either way, a Devil Baby was born. It was deformed, with horns, a tail and possibly cloven hooves instead of feet. It might begin to speak immediately, and utter profanities. It might be burned by the christening's holy water, and run around madly.

There were different versions of the Devil Baby legend. Variations popped up among Italian, Irish and Jewish immigrants. But Jane Addams noticed the similarities: in all of the tales, one or both parents did something wrong. And an innocent paid for their crime. Suffering had meaning – but it wasn't fair.

Jane Addams knew where these stories came from.

The Truth About Immigration

If you read stories today about the great immigration wave to the United States around 1900, you'll probably get a very rosy picture. It usually goes like this: 'Great-Grandpa came to this country with four cents in his pocket. He worked hard, and married Great-Grandma. He got rich and famous, and now all his great-grandchildren are Reality TV stars.'

It is true that for many immigrants, the new country was a land of opportunity. But for every success story, there's an untold number of horror stories: men and women who toiled 12-hour days in dark sweatshops, who literally worked themselves to death, women and children who were abused and neglected, victimised by employers and authorities, people who perished of disease, hunger and cold. Jane Addams knew all the stories, and she didn't blame the grandmothers for the Devil Baby story one bit. She got the point: life wasn't fair. The innocent suffered.

How to Use a Story

Jane Addams was an educated woman from a rich family. You might think she'd laugh at these silly immigrants with their superstitious tales. Or she might be annoyed that this urban legend got attached to her high-minded reform efforts. After all, she was helping these people. Is that how they repaid her?

That's not what she did. Instead, Jane Addams listened to their stories, and worked them into her own ongoing narrative about how to make her country great again. Jane Addams' idea of greatness included the tenet that all these new Americans were owed a helping hand from their new neighbours. Addams harnessed the interest in the Devil Baby story to spread the word that Chicago's poor were valuable individuals, each with a story to tell, and all worthy of our sympathy and effort.

First, she wrote about the Devil Baby for Atlantic Magazine. If you'd like to read the original article, it's available in the collection Atlantic Classics, Second Series.

Later, Addams expanded her ideas about the Devil Baby into a book called The Long Road of Woman's Memory. The book repeats many of the stories from the magazine article, but goes further into the sociological basis of the tale. Addams also places the meaning of such stories in the context of the need of women for greater economic, legal and social status. It's a great read for social historians, feminist scholars and people who are interested in other people.

Fake news is the bane of our existence. But beyond the annoyance of rumours, gossip and urban myth, there's often a problem or a need that's going unrecognised. We might do well to learn from Jane Addams' strategy. It's one way to fight the darkness of ignorance.

1National Association for the Advancement of Colored People, a significant civil rights organisation.2The Progressive Era term 'uplift' referred to the idea of improving conditions within a minority community. For example, leading minority group members could contribute to 'uplift' by succeeding in their field, which improved the public profile of the group. 'Uplift' also came from better education, lower crime and improved community conditions.3A government or charity refuge for indigent people.