Molang - a Cute Cartoon Character Content from the guide to life, the universe and everything 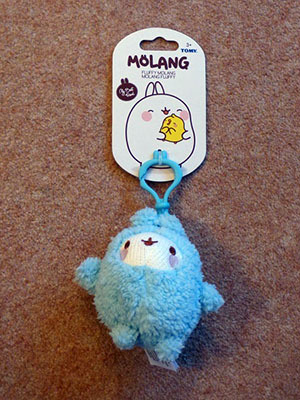 For people with young children, or people who just like cute things, Molang is an ideal character to get to know. The range of child-friendly toys, books, merchandise and animations provide something for everyone in the world of Molang.

Molang was originally designed in 2010 by Korean artist Hye-Ji Yoon as a personal mascot character, which she then turned into a virtual sticker for use on her blog and social media. The cuteness of the malang ('squeezy and soft') little round white rabbit with pink cheeks soon brought Molang to the attention of people around the world. A range of merchandise was developed and then in 2014 the French animation studio Millimages created a cartoon series for television. The TV series in turn has given rise to a range of merchandise including toys and books for children.

In the series, Molang lives in a pastel-coloured cartoon world with Piu Piu, a yellow bird. Together the friends get involved in all sorts of adventures, starting from something as simple as buying a new chair, to taking part in exotic activities such as trekking across a desert on a camel. No matter what happens to them in each three minute episode, the friendship of Molang and Piu Piu sees them through.

Molang and Piu Piu speak in their own language based on French with some recognisable English words mixed in1, like the Minions from the Despicable Me film franchise. However, it is easy to understand what Molang and Piu Piu are saying because they also hold up signs with pictures on to illustrate the objects they are talking about.

Hye-Ji Yoon didn't assign a gender to Molang, so the rabbit is not constrained by traditional expectations for girls or boys. Molang is happy wearing items such as heart-shaped sunglasses or a cowboy hat. A bowtie is useful both as formal neckwear and as a pretty head decoration. However, in English the pronoun 'he' is most often used to describe Molang and Piu Piu2.

Music is a key feature of the show. Molang has a happy upbeat song to sing when driving to the beach, for example, and yodelling is the perfect accompaniment to camping on a mountainside. The lullaby Molang sings to Piu Piu when the little bird can't sleep is particularly sweet - 'Peeka you-da, Peeka you-da, Peekaboo, Peekaboo' sung to the tune of Frère Jacques - although Molang does get a bit carried away with dancing after that so Piu Piu didn't stay asleep for long!

The themes for each episode can be very different, as Molang and Piu Piu might be at home trying to watch TV, or out and about exploring caves, or even running a hotel while the owner goes on holiday, but there are some typical incidents that occur.

When Molang has a great idea, the background turns into rays of colour and Molang leaps up with a cry of 'Yep Yep!'. Piu Piu is frequently seen becoming very angry, turning spiky, and bouncing off the sides of the television screen. Dressing up often occurs - Molang usually doesn't wear any clothes but is partial to fancy dress. For example, Molang and fellow rabbit friends gladly wear fluffy onesies at a party to make Piu Piu feel better after the pre-party preening went wrong and turned Piu Piu into a fluffball. To get closeup photographs of penguins, Molang dresses up as a penguin. Molang and Piu Piu even get roped in to rescue a kitten from a tree on one occasion when they are wearing firefighter's costumes.

Finally, each episode ends with a circle3 closing around a key feature such as Piu Piu's eye or Molang's mouth.

1Although their word for 'Thank you' sounds like the Russian 'Spasibo'. 2So even a pastel-coloured cartoon is not immune from 'masculine by default' assumptions.3With rabbit ears on top, like the 'O' in the official Molang logo.