How to Make a Pompom - the Crafty Kind Content from the guide to life, the universe and everything 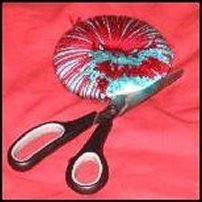 Pompoms are small balls of tufted yarn — decorative bits of fluff which are used on woolly hats, shoes and clothes. Pompoms are also the much bigger balls of fluffy material or strips of coloured paper that cheerleaders wave about1.

This Entry will tackle the smaller, fluffy pompom. Pompoms are an easy way to introduce children to the world of crafting and to keep them busy, as the final product can be achieved during one sitting. Also, there are not many fiddly bits for them to get irritated and impatient with.

How to Make a Pompom 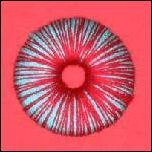 What else can I do with these little balls of fluff?

Pompoms are usually attached to woolly hats and are used most commonly by knitters to decorate bits of their work. However they can also be used to decorate hair extensions and make disco snakes or Christmas tree ornaments8.

1The cheerleading variety are also known as 'pompons' or 'pom-pons'.2Yarn ranges from wool to nylon. This terminology covers both natural and synthetic fibres.3These needles are called 'tapestry' or 'knitter's' needles.4Sewing term for 'making the end bits neat and tidy'. It does not refer to killing your pompom in any way...5A circle with a hole in the middle.6These ends can be used to tie the pompom or to be sewn into the object to be decorated.7These can be reused for other pompoms.8Add sparkly yarn strands or little stick-on stars.9Both available at craft shops.