The Ultimate Carry On Film Guide: Carry On Laughing Content from the guide to life, the universe and everything 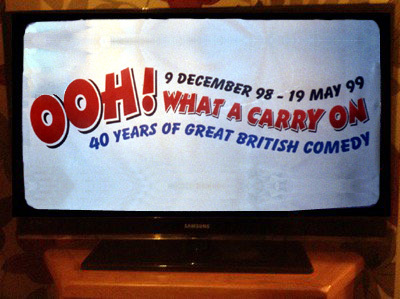 Between 1969 and 1973, Thames Television had produced four hour-long Christmas television specials titled Carry On Christmas to great success. In 1974 Thames' rivals, Associated Television (ATV), approached Carry On producer Peter Rogers in order to make a series of 25-minute television episodes starring the Carry On team in a variety of amusing historical settings.

In the 1970s, British cinema attendance was flagging and many of the most successful films were adaptations of popular television comedy series. Rogers hoped that the television series would rejuvenate renewed interest in the films.

Kenneth Williams was uninterested in taking part, just as he had not wished to appear in the Carry On Christmas specials. Sid James at the time was reported as saying he was worried that the film series would end and be replaced by the television series. Nevertheless he agreed to appear in a few before heading to Australia where he was starring in the play The Mating Season.

13×25-minute comedy sketches (30 minutes with adverts) were made in two series, with the first six shown in early 1975. Alan Tarrant directed all the episodes but different writers wrote them. The final seven were shown in late 1975 and were broadcast out of production order.

Unfortunately the Carry On series main writer, Talbot Rothwell, had been forced to retire due to health reasons and the producer had not found a writer of his calibre to replace him. The writing more than anything meant that the series never really recaptured the magic of the Carry On film series on television as successfully as the earlier Christmas specials, leaving the tone uneven and very hit-and-miss. However, six were written by Dave Freeman, who went on to write Carry On Behind (1975) and Carry On Columbus (1992).

Of the 13 episodes, six were standalone adventures. Seven featured a recurring cast and setting. Three of these were murder mysteries solved by amateur detective Lord Peter Flimsy, two were set in the time of Queen Guinevere and King Arthur, and two had an Upstairs Downstairs focus in the Bludgeon-Plunger household. Recurring characters and main cast actors are shown in Bold. Also mentioned is whether the films pass the Bechdel Test. This can be summarised as whether the film involves two or more female characters who have a conversation together that does not include or mention any male characters.

This was by far the shortest episode, being only 21 minutes in length rather than the usual 25.

Peter Butterworth plays a friar; he had previously played Time Lord the Meddling Monk in two Doctor Who adventures and had also previously been Friar Tuck in the final Carry On Christmas.

The title was inspired by Frans Hals's famous painting 'The Laughing Cavalier' (1624).

Though neither realised it, this was the last ever Carry On performance for both Sid James and Hattie Jacques. Well-respected actor, musician, writer and director Simon Callow CBE made his television debut for this episode and he is credited in the end credits. Unfortunately his role was edited out of the broadcast episode. Despite this, two of the films in which he has appeared have gone on to win the Best Picture Oscar and he was appointed a Commander of the Order of the British Empire (CBE) in 1999 for his services to acting.

5. One in the Eye for Harold

This was the last episode of the first batch, with the characters of Lord Peter Flimsy, Punter and Inspector Bungler proving so popular that they would return.

7. Under the Round Table

This was the first episode of the second series, and the first to feature King Arthur. Most of the characters would return in a sequel episode.

8. The Case of the Screaming Winkles

9. And In My Lady's Chamber

Despite a promising start, nothing happens in the last half other than various characters opening doors and walking to the toilet and back.

11. The Case of the Coughing Parrot

This was the third and final Lord Flimsy adventure.

The second story set in the Bludgeon-Plunger household, and a vast improvement on the first.

13. Lamp-Posts of the Empire

Carry On Laughing Appearances By Actor

The main Carry On cast are shown below in Bold along with other actors who appeared in at least three episodes.

In 1977 Peter Rogers admitted that the television series 'hadn't achieved what we set out to do'.