The Ultimate Carry On Film Guide: Christmas Content from the guide to life, the universe and everything 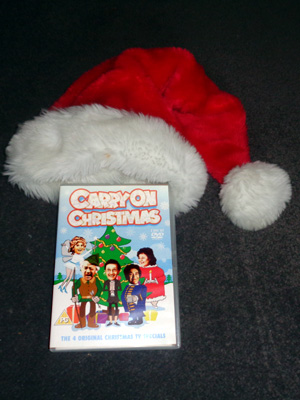 One of the most popular British film series of the 20th Century was the Carry On comedy franchise. This starred many actors and actresses who had first caught the nation's attention on television. In 1969 the Carry On films were at the peak of their popularity. Carry On Up the Khyber and Carry On Camping were both spectacular box office successes. Also that year older Carry On films were first broadcast on television, where they proved incredibly popular with viewers. These facts led Thames Television producer Peter Eton to ask about making a seasonal hour-long Christmas Carry On television special.

Carry On producer Peter Rogers described the experience with the words:

It was a gamble to try our series on television but all the artistes, particularly people like Terry Scott, Hattie Jacques and Sid James, had vast experience of working in situation comedy. They knew, by instinct, how to time lines for a television audience and could bring this knowledge to their playing of a 'Carry On'.

As the specials were being made for television, Thames Television insisted on using their own directors rather than Gerald Thomas, who directed all 31 Carry On films. Thomas was credited as 'Comedy Consultant'. These specials were heavily influenced by the pantomime tradition and usually involved the characters playing numerous roles.

Below is a description of the four Carry On Christmas episodes, with the main Carry On cast in Bold. As the Carry On films are considered to be quite sexist, whether or not the episodes pass the Bechdel Test is also mentioned. This can be summarised as whether the film involves two or more female characters who have a conversation together that does not include or mention any male characters.

Filming took place at Teddington Studios shortly after Carry On Up the Jungle finished filming in early December. It was directed by Ronnie Baxter, best known for sitcoms Rising Damp (1974-1978) and Love Thy Neighbour (1972-1976).

The story, loosely based on Charles Dickens' novella A Christmas Carol but with elements of Frankenstein1 and Cinderella, was written by main Carry On scriptwriter Talbot Rothwell. He also wrote Frankie Howerd's television series Up Pompeii. The comedian made his only Carry On television appearance in this film, although he had previously appeared in Carry On Doctor. Rogers described this by saying:

For Frankie Howerd [appearing in 'Carry On Christmas' on television] was like a duck to water. He had always been troubled by film-making, only fully coming to life when he could get the technical crew laughing at what he was doing. For the television show, he was in his element with an invited audience to entertain.

Carry On Christmas was also one of Britain's first commercial television productions made in colour. Although BBC2 had been broadcasting in colour since 1967, ITV first broadcast in colour on 15 November, 1969, just over a month earlier. Broadcast on Christmas Eve at 9.15pm, the show attracted over 18 million viewers and was the most-watched programme for Christmas week. It continued to prove successful when repeated in December 1971 when over 20 million viewers tuned in.

Following the success of Carry On Christmas it was natural for both Thames Television and Carry On producer Peter Rogers to want to repeat the success for Christmas 1970. This time the story was based on the popular novel Treasure Island (1883) by Robert Louis Stevenson2. There were a few tweaks to the timeless tale to make it suitable for a Carry On audience, such as Squire Trelawney being renamed Treyhorny ('it's French'). However, there was a potential problem. A strike by Thames Television's technicians prevented it being recorded in colour and almost prevented it from being made at all. In the end it was recorded in black and white, making it the last black and white Carry On production.

Unlike the previous year's special, this was not written by regular Carry On writer Talbot Rothwell. Instead it was scripted by his occasional writing partner Sid Colin, and Dave Freeman. Colin had written episodes of television series The Army Game (1957-61) and Bless This House (1971-76), and Freeman would later write Carry On Behind (1975) and Carry On Columbus (1992) as well as the Carry On Laughing (1975) television series. It isn't quite up to the same standard as Talbot's scripts. Carry On Columbus later reused some elements from this script, particularly the scene in which Long John Silver is about to be hung but promises to share his hidden treasure to prevent his execution.

Directed by Alan Tarrant, who had previously directed Sid James in programmes such as George and the Dragon (1966-68) and Two in Clover (1969-70), it was watched by 17 million viewers when broadcast at 9.10pm on Christmas Eve. Carry On Again Christmas marks Wendy Richard's first Carry On appearance; she would later briefly appear in Carry On Matron (1972) and Carry On Girls (1973).

As Carry On at Your Convenience had flopped in 1971, they did not make a 1971 Carry On Christmas special, but showed the 1969 one again. It became the third most-watched programme of Christmas week. Thus in 1972, Carry On Christmas returned. As it was known that the programme would be interrupted by ad breaks, it was decided to return to the sketch show format as it was felt this had worked well for the first Christmas special. Broadcast on 20 December, 1972, it was watched by 19 million viewers.

Unfortunately Talbot Rothwell, the main Carry On writer, became seriously ill when writing the script and had to abandon it halfway through. It was finished by Dave Freeman, who finished writing while suffering from heavy 'flu. It still has Rothwell's influence throughout, particularly the sketch 'The Last Outpost', which contains elements of Carry On Up the Khyber (1968). Perhaps it is because of the two writers who never met that the story 'The Last Outpost' is introduced as being set in India when, during the story itself, the characters say they are in the heart of Africa. This story is set in early Victorian times, even though it is narrated by a character in an inn in the 18th Century, another error. A highlight is that the episode contains the madrigals originally written for Carry On Henry (1971). Songs of the calibre of 'On The Day Good King Harry Got His Hampton Court' may well bring a tear to the eye.

Sadly this television show was the straw that broke the camel's back in the relationship between Charles Hawtrey and producer Peter Rogers, which had been severely strained when Hawtrey's alcoholism had made him increasingly unreliable and erratic. When Hawtrey heard that the third Carry On Christmas would not feature Sid James or Kenneth Williams, who normally enjoyed first and second billing, he assumed that he would finally achieve the ambition he had long held and be top billed on a Carry On. Rogers, however, decided to give top billing to Hattie Jacques based on her popularity on BBC sitcom Sykes, and offered Hawtrey second billing. Hawtrey felt snubbed, especially as Hattie Jacques had had 11th billing in Carry On Abroad (1972), the latest film in the series. Hawtrey demanded top billing or he would not appear. Rogers described what happened next:

There was no question that Charles Hawtrey was going to hold me to ransom. We offered him second billing and that was that. He wanted time to think it over, which we gave him... on the final day Gerald [Thomas] once again offered him second billing and Charles refused. There was no way that we could trust Charles Hawtrey after letting us down like that, so we never used him again.

Hawtrey would never again appear in a Carry On film, having appeared in all-but-one of them since 1958. The lines written for Hawtrey were split between Norman Rossington and Brian Oulton. Jack Douglas had a remarkably prominent role in this special considering that at this point he had only briefly appeared in Carry On Matron (1972), a performance for which he reportedly was not even paid3, though he would go on to star in a total of eight films in the series.

This was broadcast on Christmas Eve 1973 at 9pm across all regions and was heavily promoted, with Sid James and Barbara Windsor on the front of that year's TV Times Christmas edition. Unfortunately, faced with stiff competition on the BBC4, it had disappointing ratings and did not make the festive top ten, but when repeated two years later on 18 December, 1975, it was watched by over 20 million viewers.

There were hints of previous Carry On films. For example the caveman sequence in which they discuss eating brontosaurus was similar to scenes in Carry On Cleo (1964), in which Kenneth Connor had played a caveman named Hengist Pod.

The show was directed by Ronald Fouracre, best known as the producer/director of The Benny Hill Show5 (1955-91). Scriptwriter Talbot Rothwell so enjoyed writing the sketch set in the Great War that, after he finished Carry On Dick (1974), he started writing a Carry On film script set during that conflict. Sadly, following a suspected stroke, Rothwell's health declined and never recovered, preventing him from finishing it before he died.

Carry On Christmas Appearances by Actor

1Bernard Bresslaw who played Frankenstein's Monster had played the sinister butler Sockett in Carry On Screaming (1966).2The Muppets would later follow-up the same pattern, with their adaptation The Muppet Christmas Carol (1992) followed by Muppet Treasure Island (1996).3Jack Douglas in his autobiography and elsewhere always maintained he wasn't paid, but Peter Rogers has stated that he believes he did actually pay Douglas £25.4The Steptoe and Son Christmas Special on BBC1 and The Sonny and Cher Show on BBC2.5Comedy was therefore quite new to him.