The Science of Pellucidar in the Novels by Edgar Rice Burroughs Content from the guide to life, the universe and everything 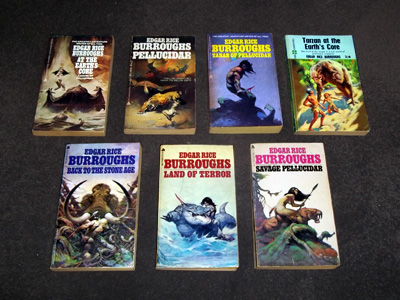 Edgar Rice Burroughs (1875-1950) was an American novelist most famous for creating the character of Tarzan, yet he also wrote science fiction adventures. As well as stories set on Mars, or Barsoom as its inhabitants know it, and five set on Venus, many more are set in lost worlds that time forgot on Earth. One series of novels is set inside the Earth, which is found to be hollow, in the fantastic land of Pellucidar.

Burroughs's work was considered 'science fiction' in its day. One feature distinguishing science fiction from fantasy is that anything unusual is explained using science rather than magic. In his Barsoom (Mars) books, for example, Burroughs imagined the thin, natural atmosphere of the planet being augmented by an atmosphere factory - by adding electricity to a type of electromagnetic radiation unknown on Earth, air was produced. Of course, the author's grasp of science is often rather tenuous - such an explanation makes as little sense as invoking magic would.

It is interesting and amusing to consider the 'scientific' facts and explanations which Burroughs presents as a background to the adventure stories in the world of Pellucidar.

The Pellucidar novels are set on the inner surface of Earth's hollow sphere. In the story, the Earth's crust is only 500 miles thick. When the Earth was formed it was a hot, rotating, nebulous mass that cooled and shrank. Centrifugal force hurled out the heaviest elements to form an outer, solid layer that became the Earth's crust – our surface. While the Earth continued to shrink it made a vast hollow interior filled with a breathable atmosphere and at the very centre a small super-heated core that acts as the inner world's sun. Surrounded on all sides by the solid crust, gravity keeps this sun in the very centre of the Earth and it lights every surface of the inner Earth eternally.

Pellucidar also has its own inner moon, which orbits a mile above Pellucidar's surface. This takes 24 hours to orbit the central core sun, which means that, as the Earth rotates at the same rate, it always appears above the same part of Pellucidar, named the Land of Awful Shadow. Here the land is bathed in a perpetual eerie twilight, such as that experienced during an eclipse. It is believed that spirits of the dead travel there, so it is named the Dead World. The moon has mountains and rivers and is believed to also have an atmosphere.

'Pellucidar' is named after the word pellucid. Like 'Lucid' this word usually means 'transparent' and 'clear and understandable', but originates from the Latin per- meaning 'very' and lucidus meaning 'bright'. The land is therefore called 'very bright' to emphasise the fact that the land has an eternal sun and no night.

The Land that Time Forgot

As there is no day and night, the laws of time no longer apply. This is discovered in the first book At The Earth's Core when at one point two main characters, David Innes and Abner Perry, are separated. Innes escapes their captors, walks across vast distances, explores new lands and islands and eventually returns months later, only for Perry to be convinced that Innes had only been gone an hour. There are even passages in which the main characters awake to be unsure whether or not they have been asleep for a second or a year.

As the sun is always in the same place relative to the surface, in effect this means there are no seasons either and it always appears to be spring. Without a sun rising in the East and setting in the West, compass directions are also unknown.

Since objects fall when dropped even on Pellucidar, we can assume that time does indeed pass, and that it is the human perception of time that is at fault. Visitors to Earth's Arctic and Antarctic regions, where the sun never sets in the summer, will vouch for the disorientating effect of the lack of day and night. Perhaps in the absence of any noticeable signs of time passing, the people of Pellucidar have lost their connection with time.

One benefit of the lack of days and nights is that the main heroes no longer seem to age, although they still encounter elderly background characters. How can the lack of ageing of Pellucidar's people be explained? We know that different animal species age at different rates. Domestic cats appear to age until they are about ten, then can continue for up to two decades with no apparent ageing. Certain species of fish do not appear to age at all and just continue living, growing slowly, until their bodies are too big for them to catch sufficient food. And there is no doubt that mental states can affect the body subtly. So perhaps the people of Pellucidar have developed this agelessness through not believing in time.

Innes notices that the inner moon fully rotates once every 24 hours and realises that time can be measured by watching the appearance and disappearance of features on its surface. However, the people of Pellucidar were uninterested in measuring time and so one of Innes' early edicts as Emperor was to officially abolish time1.

Every part of the Earth exerts a tiny pull on your body. The bits just under your feet pull on you the strongest, while the bits that are at the other side of the world pull the least. If you are standing in London, then New York's Empire State Building is pulling you towards the southwest, while the Eiffel Tower in Paris is pulling you southeast. The combined effect of all these tiny pulls adds up to a single force pulling you straight down towards the centre of the Earth. This pull is variously known as 'the force of gravity' or just 'your weight'.

If you're standing on the inside of a hollow sphere, with your feet on the surface, the centre of the Earth is directly above your head. Some parts of the sphere are pulling you down (towards your feet) while other are pulling up (towards your head). It's not immediately obvious what the combination of all the different pulls will result in.

Unfortunately it is not that simple. Isaac Newton, who came up with the idea of Gravitation in the first place, also developed the mathematics to study it. If you are inside a hollow sphere and add up all the different pulls, they cancel each other out exactly. You won't feel any force of gravity at any point inside the hollow sphere. With nothing to hold you to the surface, you would drift off into the vast volume of empty space inside the sphere. A practical way to avoid this would be to wear velcro-soled shoes, but the downside is that you would have to cover the entire inner surface of Pellucidar with some sort of looped carpet.

Worse still, the mini-sun sitting at the centre of the Earth would not feel any gravitational pull from the hollow shell around it, so there would be nothing to keep the sun in the centre. Gradually over time it would drift away from the centre and eventually would strike the shell, no doubt knocking a hole in it.

According to Innes, the central sun of Pellucidar looks about three times as big as our sun. Since it is only 3,500 miles from the people of Pellucidar, we can calculate that it must have been about 100 miles in diameter. The scientist Perry thought that it must be composed of gas but this presents a problem. A sphere of hydrogen only 100 miles in diameter would not be big enough to support fusion, the nuclear process that powers our sun. At the time Burroughs was writing, it was not known how the sun works, so he can be forgiven for making this mistake.

But there is another possibility. The central sun may actually be a solid sphere of something dense such as iron, at a very high temperature. If this sphere was heated to 5,500°C, it would glow just like the sun and would be indistinguishable from a small star to the human eye. Geology tells us that in fact parts of the centre of the Earth are even hotter than this, so this not an unreasonable explanation for Pellucidar's sun.

This brings us to another problem. Innes described the sun as looking much like our sun except that it was 'thrice the size', so we can assume that it is the same colour as our sun. Since the colour of a glowing object depends on its surface temperature, Pellucidar's sun must have a similar surface temperature to that of our sun. If Pellucidar's sun looked a similar size in the sky to ours, then the heat received from it would also be similar.

Unfortunately, we have Innes's statement that it is three times the size. We don't know whether he meant in area or in diameter. If the former, then three times as much heat would be received from it as we receive from our sun at the equator. Worse, if Innes meant three times the diameter, then a person standing on the surface of Pellucidar would feel nine times as much heat coming from the sun as is felt on the equator of Earth. It seems unlikely that life would survive in a world receiving even three times, never mind nine times, as much heat at every point on its surface as the Earth does at its equator.

On the other hand, it is notoriously difficult to judge the size of the sun in the Earth's sky. An optical illusion makes it look bigger at the horizon than when high in the sky. Who knows what even a tiny sun would look like when directly overhead in a world that has no horizon? Perhaps Innes made a mistake and the apparent size of Pellucidar's sun (and therefore its heating effect) is in fact the same as our own.

In conclusion, the Pellucidar novels by Edgar Rice Burroughs are highly enjoyable escapism that should not be taken too seriously.

1Burroughs often contradicted himself, so though in novel Pellucidar (1915) he emphasises how revolutionary and positive a development the introduction of time will be, by Tanar of Pellucidar (1929) Burroughs has changed his mind and so time is outlawed instead.