parkruns of the Isle of Wight and Hampshire Content from the guide to life, the universe and everything 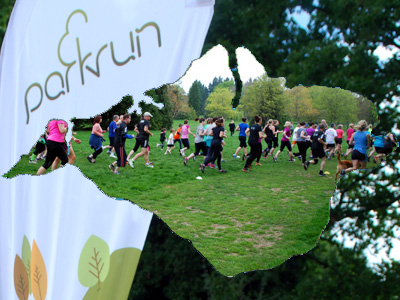 parkrun1 is an organisation that runs free, weekly, 5K (3 mile) long timed runs. These events are held all around the world every Saturday and are open to everyone equally, regardless of whether participants are able to run or wish to walk. There are over 1,200 events, in 17 different countries around the world, over 500 of which are in the UK. The first parkrun was held in Bushy Park in London in 2004. Other parks in London and nationwide joined in 2007, with parkrun spreading internationally in 2009.

Runners' times are recorded by using a personal barcode that can be printed out once runners have registered on the parkrun website. The parkrun events are run by volunteers and runners are encouraged to volunteer at least three times a year to help keep them going.

Visiting a parkrun outside your home run is considered parkrun tourism, and runners who visit at least 20 different parkruns in the UK can earn the title of 'tourist'. At present (2020) with one held on the Isle of Wight and 20 in Hampshire, you can earn the title of 'tourist' purely within this area. Those parkrunners who enjoy tourism like to set themselves weird and wonderful challenges. These include the challenge to become an Alphabeteer, which is completing a parkrun beginning with every letter of the alphabet2. Although many challenges are based on the first letter of the parkrun's name, the Compass challenge involves completing parkruns with 'North', 'East', 'South' and 'West' in their name. Another popular challenge is to become a Regionnaire, which is to complete every parkrun in an official parkrun region. The Isle of Wight and Hampshire are both classed as part of the UK's South West Region, along with Kent, Sussex, Surrey, Berkshire and Oxfordshire.

The courses are described in tables below. Here is a brief explanation of the information included. There is a more detailed glossary at the bottom of the Entry.

What are you running on?

How hilly is the course? Out of 500 courses in the UK, the higher the number the hillier the course. Of course how hilly the course is is only one measure of difficulty.

Introduced by Run Britain, the SSS rates the difficulty of parkruns. The lower the score, the easier the run. How the parkrun compares to the 513 parkruns in the UK is also listed. The higher the number, the more difficult the course.

Are you running loops, laps or out-and-back?

When was the first parkrun at this location?

Which (if any) train station is nearby?

What is the area around like? What else is there for tourists to do?

The Isle of Wight's only parkrun is unusual in that it frequently moves location. Although normally based at Seaclose Park in Newport, in the very centre of the Island, during the summer and when events such as the Isle of Wight Festival are being held there the run is located at a different town on the Island, often Appley in Ryde (PO33 1ND)3. Other locations have included Gurnard near Cowes, Dodnor outside Newport for the cycle path to Cowes and Shanklin seafront. Even when the run is held at Seaclose Park the route often changes, either using the sports field and arboretum or the riverside footpath.

Runners are strongly advised to check the Medina parkrun news page and/or facebook page to double-check they know where it will be held.

Hampshire is not a part of the Isle of Wight but is in fact a separate county on the Mainland.

A twisty-turny course through woodland, so the paths are fairly narrow. The course passes Gruffalo statues. Alice Holt parkrun is held in Forestry Commission land within the South Downs National Park. The surrounding area is very picturesque and there are numerous woodland walks and play trails.

A fast, flat course with a nice wide start on grass before the path narrows for the tarmac section. There is a short contraflow section.

National Cycle Route 23 runs through War Memorial Park. Basingstoke counts towards the Stayin' Alive challenge - to complete this, you must run at three parkruns beginning with B and three beginning with G, as the Bee Gees sang 'Stayin' Alive'.

Brockenhurst is unusual in having two courses: a summer course held in the town, and a winter course held in Wilverley Inclosure in the New Forest. The Wilverley Inclosure course is a jewel in the crown in England's parkruns, but unfortunately the Forestry Commission does not allow access in the summer. In the summer runners instead run around a playing field several times.

This course also counts towards the Stayin' Alive challenge. As the Winter Course is in the heart of the New Forest along gravel paths, look out for wandering ponies. There is a steep hill near the end – it is an unwritten almost-rule that steep hills at parkruns are nicknamed 'Heartbreak Hill'. One Researcher described his experience at Brockenhurst with the words:

Eastleigh counts as part of the Compass challenge. The course is all on grass, and there are three laps. Since several trees were chopped down the course has frequently suffered from being waterlogged and runs have been cancelled following prolonged periods of heavy rain. National Cycle Route 23 runs by, and National Cycle Route 24 runs through Fleming Park.

An out-and-back, probably the narrowest. This makes overtaking difficult and may result in a very slow start. Quite twisty and turny with lots of little inclines.

A picturesque run with a real cross-country feel.

The site used to be owned by the Ministry of Defence as part of the 4,410 acres of the Bordon and Longmoor Military Camp. Home of the Royal Electrical and Mechanical Engineers until December 2015, it was used as a tank training ground/assault course. This means there are nice, wide paths that tanks can get through, but there are also lumps of tank-teeth concrete everywhere. As the garrison has been relocated and the area is in the London commuter belt, an area the size of a medium town is now a housing development, with the Inclosure in the middle being kept as a nature reserve.

The course is reasonably flat but with a short, steep hill. Please be aware that the route can get very waterlogged and muddy in winter especially as most of the course is on grass.

As the course is around the school's playing field, this is often busy - drivers are recommended to park in the nearby Luzborough House pub. Due to the narrowness of parts of the course and the camber, Mountbatten School is unsuitable for prams and buggies. The school also does not allow dogs on site.

Queen Elizabeth is the hilliest course in Hampshire and one of the hilliest in the UK, located in the heart of the South Downs National Park.

This parkrun counts towards the Pirate challenge - to complete this challenge you must run seven Cs and an R.

Southampton counts towards the Compass challenge.

Southsea also counts towards the Compass challenge. The route runs parallel to the road along the finish for the Great South Run. Although Southsea is the flattest parkrun in the country, it is notorious for its surprisingly strong sea breeze. National Cycle Route 2 runs along the prom.

Located next to one of Hampshire's largest shopping complexes, Whiteley is a narrow, three lap course. As the path is narrow the start is likely to be slow.

Here are descriptions of the words used in the table:

Section in which runners may encounter runners coming in the opposite direction, so you need to stick to your side of the path.

In loop or lap courses, a dogleg is a short, straight section that leads outside the loop, often at the start or end.

A forestry plantation fenced off to prevent large animals from entering.

Instead of running the same route more than once as laps, a loop involves running different routes, such as a 2k loop followed by a 3k loop.

There are two National Parks in Hampshire: the New Forest and the South Downs.

A run in which you head out, turn around and head back.

A run around a sports playing field. These tend to be flat and so potentially fast, but are far less interesting than other parkruns.

A seaside run along an esplanade/promenade.

Sudden 180° turn to head back the way you came.

Not flat, with lots of little up-and-downs rather than a hill.

parkrun is not about the course but about the people. It all comes down to the community.
- Paul Sinton-Hewitt, founder of parkrun

1parkrun is always spelt with a lowercase p.2Note that there isn't a parkrun beginning with 'X' at present.3This usually involves a lap around Appley Park followed by a two-U-Turn out-and-back promrun that encompasses running around Appley Tower and through Puckpool Battery's moat before returning to the park up the incredibly steep 'Tourette's Hill', so-named for the reaction it generates.