UK National Cycle Route 23: Part 5 - Alresford to Basingstoke, Hampshire Content from the guide to life, the universe and everything 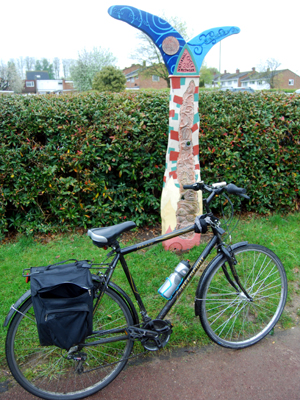 National Cycle Route 23 is part of the UK's National Cycle Network. It takes cyclists from the picturesque seaside resort of Sandown on the Isle of Wight to Reading in Berkshire, the route covering 80 miles in total. This Entry describes the fourth section of the route, a hilly 18-mile trip from New Alresford, often referred to simply as Alresford, to Basingstoke in Hampshire. The first part of this section of the route is almost entirely uphill, with the rest of the section undulating. It can be cycled in under two hours.

Getting to the Start of the Route

This is the first section of the route not to have a mainline railway station. The nearest mainline stations are Alton and Winchester, although there is the Watercress Line Steam Railway station at Alresford, which runs trains from the junction with the mainline station at Alton. Trains to Alton run from London Waterloo every half hour, or every hour on Sundays. The Watercress Line allows bicycles to be carried on their trains from Alton to Alresford for free, although restrictions can apply during busy times. Alresford is also accessible from the M3 from either Junctions 9 or 10, following the A31.

This section of National Cycle Route 23 seems to avoid many points of interest in the local area. The places of interest that the route actually passes include:

There are attractions within five miles of the route that the route does not actually pass. These include:

This section is well signed, although some signs are located close to hedges and can be difficult to spot. It is recommended that an up-to-date Ordnance Survey2 map is taken.

This section overlaps on two 1:25,000 scale Explorer maps. Explorer 132 Winchester, New Alresford & East Meon covers the section between Alresford and Low Wield, while Explorer 144 Basingstoke, Alton & Whitchurch covers from Medstead onwards. Landranger Map 185 covers the whole route on a 1:50,000 scale. On an up-to-date Ordnance Survey map, the route is included as a red or orange3 dotted line clearly labelled with '23' in a rectangle.

This section of the route starts in New Alresford near the Watercress Line Steam Railway's station and ends in the large suburban town of Basingstoke. The route is almost entirely along narrow country lanes, with the only cycle paths in the outskirts of Basingstoke, a town renowned for its plethora of roundabouts.

From Station Approach, head north along Jacklyns Lane, away from the Watercress Line, the affectionate nickname for the Mid Hampshire Steam Railway. At the T-junction, turn east into West Street, the busy B3047, heading uphill. At the crest of the hill turn left (north) down the wide Broad Street, following the road as it jiggles around a couple of houses on the right and passes watercress beds and Old Alresford Pond, crossing the River Alre. This is a tributary of the Itchen which has been a constant companion since Southampton, but we won't be encountering either the Alre or the Itchen again on the route.

After crossing the river, as the road bends to the left, turn right into Malthouse lane, heading east. This will pass more watercress beds before heading uphill and northeast, passing a short copse on the left. Follow the narrow country lane up and up before the road twists and turns and heads gradually downhill, entering the small village of Bighton, the location of a pub.

Medstead is one of the highest villages in Hampshire. This regrettably results in all of this section of the route being uphill. The route itself is straightforward. After entering Bighton, which is 86 metres above sea level, turn right (south) down Bighton Lane followed by an immediate left (northeast) into Bighton Road. Follow this country lane up and up, passing West End Lane, Chalky Hill and reaching a junction with Homestead Road. Keep left heading north and uphill along Common Hill, and eventually you reach the top where the hill crosses High Street on the right and Wield Road on the left, 197 metres above sea level. This junction is the outskirts of the historic village of Medstead - the centre of the village, which the route does not visit, is over 700 feet (210m) above sea level.

Although the route to Basingstoke does not enter the village and heads left (west) at the junction, a spur of the route leads from this point to Alton. This is variously labeled as 'National Cycle Route 23', '24' or even 'Local Cycle Route 224' on different Ordnance Survey maps, and links the route with Alton.

Medstead village itself is a short distance on the right (east) and contains a pub, shops and a Norman church. About a mile and a half beyond the village to the southeast is Medstead and Four Marks railway station. This is part of the Watercress Line and the highest railway station in Southern England.

Medstead to Bradley is the most rewarding section of the route to cycle, as you go from 197 metres above sea level at Medstead down to only 121 metres at Bradley. At the junction, follow the signpost left along Wield Road on the crest of the hill. The road gradually descends and at the first T-junction turn right into Ashley Road followed by a left into the country lane into the hamlet of Low Wield, passing a pub on your right. After the pub the lane narrows and you are faced with a short uphill slope. Take the next right turn, passing the last few scattered houses of Low Wield and follow the country lane down Berryhill Lane, up a minor hill and then downhill, passing the sign welcoming you to Bradley.

From Bradley continue northwest, heading uphill as the lane has minor lanes forking off on the right. Pass a field on your right and an avenue of trees on your left and cross a junction with a minor road, continuing to head north-northwest and uphill. This lane heads in a straight line north passing an occasional house, uphill most of the way, reaching a height of 168 metres above sea level. After passing a view overlooking the attractive Moundsmere Manor, the road finally begins to descend, followed by a sharp right bend. The road then heads northeast, passes another bend to the left and then again begins to climb through an attractive, wooded area, Fliscombe's Copse.

Follow the lane with the outskirts of the Copse on the right and Cannon Wood on the left. This area is popular with deer, and cyclists may be rewarded with a view of deer, possibly even crossing the lane in front of them. After a couple of twists and turns, the lane arrives at a crossroads with Berrydown Lane on your left and Axford Road on the right, with Green Lane ahead. Go straight through the crossroads and continue north up Green Lane. This again is uphill and passes High Wood on the left. When the road forks, stay left. The road leads by the scattered houses which make up the settlement of Ellisfield. Near the top of the hill, you will pass the Fox Inn on the left, a pub which contains an E-Bike electric bicycle charging point. This pub is in the centre of Ellisfield and is 186 metres above sea level.

The road carries on to the top of the hill, curving northwest, up to 199 metres above sea level when Green Lane reaches the junction with Church Lane. Stay left on Green Lane, passing picturesque thatched cottages, and then stay right at the next junction where Green Lane becomes Northgate Lane. This lane follows several twists and turns but is fairly flat and on a windy day feels exposed. The lane reaches the highest point of the route shortly after Kingsmore Copse, 201 metres above sea-level, before descending to 142m at the junction with Church Lane, where a cyclist should turn left and continue the descent to Cliddesden. Pass Cliddesden's Grade II Listed St Leonard's Church on your right, and at the bottom of the hill, next to the junction with Farleigh Road, you will find the village of Cliddesden's central duck pond and bench. This duck pond is 115 metres above sea level.

From the duck pond, head northeast (right), then turn left into Woods Lane opposite the pub. This narrow lane winds uphill, rewarding the cyclist with a view overlooking Basingstoke, before plunging down beneath the M3 and entering the large town. Naturally, the first thing encountered in Basingstoke is one of the many roundabouts. Follow the cycle path around the roundabout and northeast along Hatch Warren Way until just before the second roundabout. Here the cycle path crosses the road, and passes along a short section through trees to the road called Jay's Close. Next, the route turns right (west), following the road in a circle passing close to the Viables Craft Centre, location of the Viables Miniature Railway run by the Basingstoke & District Model Engineering Society. This is the third and last miniature railway that the route passes in Hampshire, with trains running infrequently.

Follow Jay's Close through the industrial estate. The pavement is a shared use footpath and cycleway and heads away from the road before approaching the third roundabout encountered since entering Basingstoke. Following the cycle path away from the roundabout before crossing Harrow Way and following the short cycleway on the pavement right (east) and then turning northeast along Cliddesdown Road. Half way along Cliddesden Road, take the subway beneath the busy A30 dual carriageway Ringway South. Continue down Cliddesden Road, passing a pub, before the road ends at the junction with the busy Hackwood Road. Follow the cycle path on the pavement left (north) alongside Hackwood Road to the toucan crossing. Cross here and enter Basingstoke's War Memorial Park.

Follow the path around War Memorial Park to the right, following the signs. The path heads south initially before curving left and bearing northeast to the quiet road, Crossborough Hill. Follow this road north to the busy London Road. A cycle path takes you right (east) to cross the road; once over the road on the pavement turn left (west) and then take the first road north down Eastrop Lane. When Eastrop Lane stops heading north and curves right (east), head onto the cycle path on the pavement heading east. This cycle path leads into Eastrop Park, where the next section of the route, to Reading, begins. However Basingstoke Railway Station is only a short distance north from this point and can be walked to via the town's subway network.

This is the end of this section of National Cycle Route 23.

UK National Cycle Route 23
Introduction | Sandown to East Cowes, Isle of Wight
Southampton to Eastleigh, Hampshire | Eastleigh to Alresford, Hampshire via Winchester
Alresford to Basingstoke, Hampshire | Basingstoke, Hampshire to Reading, Berkshire
1On 29 March, 1644. The Parliamentarians defeated the Royalists.2Ordnance Survey is the official British mapping organisation. They have been mapping the UK since 1790, initially for military purposes for the Board of Ordnance, the equivalent of the Ministry of Defence, to assist the defence of Britain in case of an enemy invasion.3The colour of the dotted line depends on the type of map. It is usually red on Landranger maps, orange on Outdoor Leisure and Explorer maps. See the key on the relevant OS map.